The Hard Lessons of Crypto’s Crash

A millennial in my family with a tendency to pontificate about the benefits of cryptocurrency came to me this week, singing a different tune. “I lost my shirt in Bitcoin,” he complained, looking depressed. “What happened?”

Hence this article, which I’ve written as a public service for all investors, young and old. Let’s look at the recent carnage in crypto, and the lessons it teaches us.

The flight from risk-on assets has devastated the price of Bitcoin (BTC) and other cryptocurrencies, erasing more than $1 trillion worth of digital money since November 2021.

Savvy investors remain wary of the madness of crowds. From the Dutch tulip mania of the 17th century, to the bull market of the roaring 1920s, to the dot.com bubble of the 1990s, to the social media “memes” of the 2020s, the human proclivity for lemming-like behavior never changes.

The broader markets are in a slump too, albeit not as severe as the one in crypto. The major U.S. stock market indices closed mixed Thursday, after considerable volatility, in the wake of new data that showed inflation, while decelerating by some measures, remains far too hot. Stocks performed as follows: the Dow Jones Industrial Average -0.33%; the S&P 500 -0.13%; the NASDAQ +0.06%; and the Russell 2000 +1.24%.

In pre-market futures contracts Friday, the four U.S. indices were trading in the green as Wall Street attempted a comeback.

The tech-heavy NASDAQ’s woes are exacerbating the negative sentiment toward crypto. More than 70% of NASDAQ-listed stocks currently hover in bear market territory, or worse.

Loss of confidence in crypto also is fueled by geopolitical unrest, fears of an impending recession, high inflation, and rising interest rates, the factors clobbering stocks in general.

In this volatile and risky environment, investors are fleeing aggressively speculative assets. That’s especially true of the younger, neophyte day traders who have piled into crypto and who tend to run for the exits when conditions get dicey.

The price of Bitcoin, the grandfather of crypto, and its main rival, Ethereum (ETH) have plunged about 30% over the past seven trading days.

The following chart compares the declines of BTC, ETH, and the benchmark SPDR S&P 500 ETF Trust (SPY) so far in 2022: 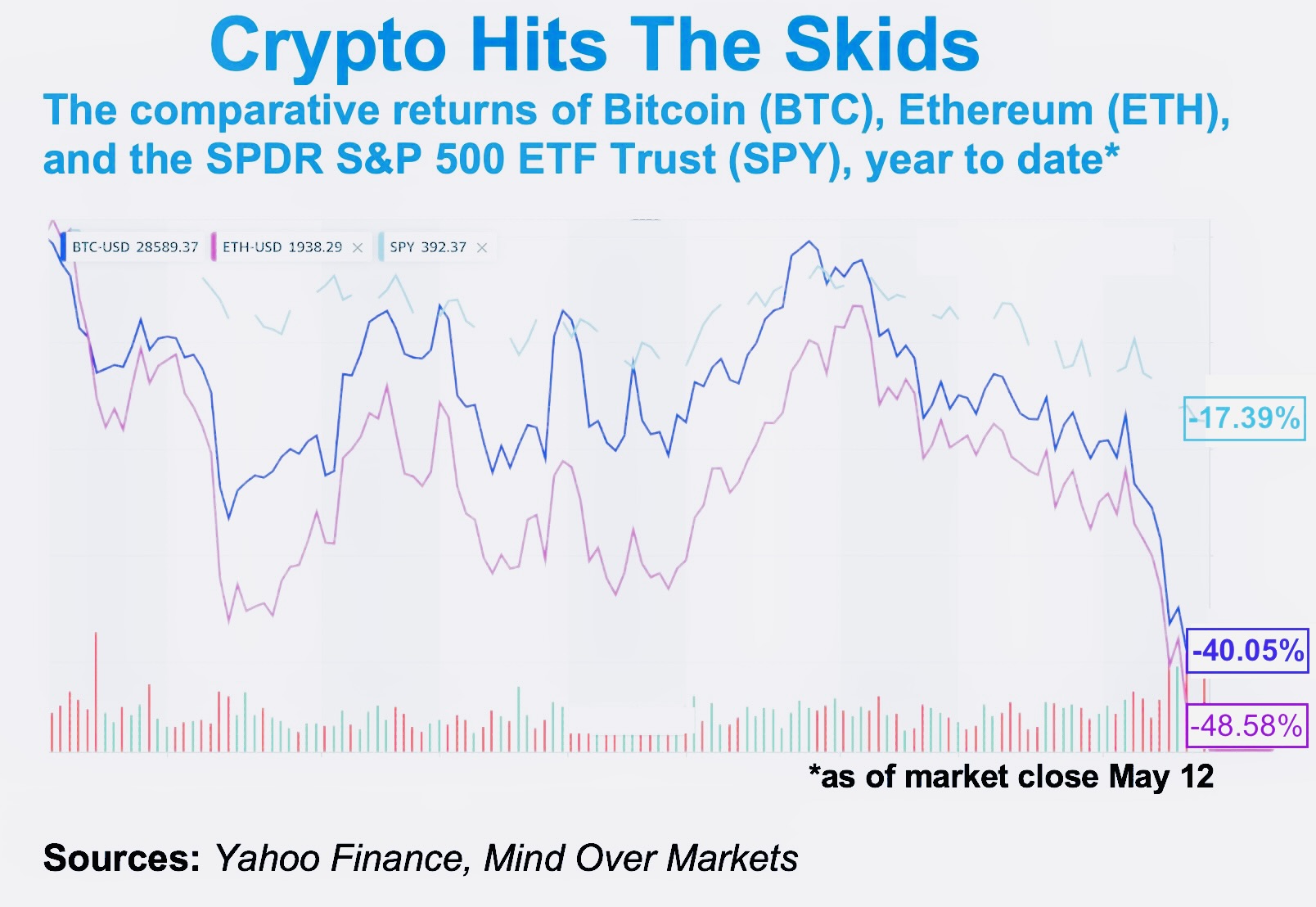 Declines in BTC and ETH accelerated this week, after the TerraUSD (UST) stablecoin broke its 1:1 peg to the U.S. dollar and sunk to as low as 26 cents, triggering a cascade of declines across the crypto sector.

UST isn’t backed by liquid assets; instead, the token is supported by about $3.5 billion in reserves of Bitcoin. UST’s collapse caused the implosion of its sister cryptocurrency Luna Coin USD (LUNA). Luna on Thursday plummeted 99% (that’s not a typo), falling to under $0.02 per coin.

Does all of this seem like, well, lunacy to you? You’re not alone.

U.S. Treasury Secretary Janet Yellen vowed this week in Senate testimony that financial regulators would soon release a report on the risks of cryptocurrency.

In her remarks to the Senate Banking Committee, Yellen had some harsh words for cryptocurrencies, particularly stablecoins:

The aggregate value of stablecoins surged this year to exceed $180 billion in March 2022, the Federal Reserve noted in its financial stability report, released May 9.

President Joe Biden moved toward regulating cryptocurrency in March when he signed an executive order that called on federal agencies to assess the effects of cryptocurrency on the stability of financial markets.

Let’s be clear: I’m not a tech Luddite. Crypto coins might not last over the long term as speculative investments, but they are changing global finance and human society in a permanent way.

Pro-active investors can leverage crypto’s underlying technology for profit. For example, I’ve written extensively about the money-making potential of the blockchain. But you need to separate solid opportunities from hype-driven fads.

The lessons of crypto’s brutal collapse are timeless: Stick to investments that you understand; don’t get caught up in the Fear of Missing Out (FOMO); create a long-term strategy and pursue it patiently; look for intrinsic value; and study the underlying fundamentals.

And when it comes to performing investment homework, few analysts are more diligent than my colleague Robert Rapier.

Up, down, sideways… even in the face of rising interest rates… tech selloffs…overseas war…and anything else this crazy market throws at you, Robert’s trades are income-generating machines. Click here for details.