After a long hiatus, my wife Carole and I are rediscovering the great pleasure of eating in bars and restaurants again. Millions of pandemic-weary Americans are undergoing the same experience.

U.S. consumers are increasingly shopping and dining out, in defiance of elevated inflation, lingering COVID, and rising interest rates. The government’s latest retail report, released Tuesday, shows that bar and restaurant sales in April rose 19.8% from a year ago.

Americans’ comfort with dining out is on the rise, as underscored by recent survey data from the research firm Morning Consult. As of May 11, 76% of U.S. adults reported that they feel comfortable going out to eat at a restaurant, up 1 percentage point from the previous week. The share of those who feel comfortable dining out has increased 15 points since early January.

We’ve been hearing warnings lately that the U.S. economy is heading for stagflation, a pernicious situation in which the economy declines but prices rise. We haven’t seen stagflation and its demoralizing effects since the 1970s. But I think we should be less afraid of the “S” word, in large part because of the resilience of the U.S. consumer.

Retail sales jumped 8.2% on a year-over-year basis, a 12-month period during which inflation rose by 8.3%. April’s number was in line with estimates. Excluding automobiles, the headline number rose 10.9%.

April’s sales rose 0.9% on a month-over-month basis, slightly below the 1% consensus estimate. Driving gains were a 4% increase in miscellaneous retail and a 2.1% rise in online sales (see chart). 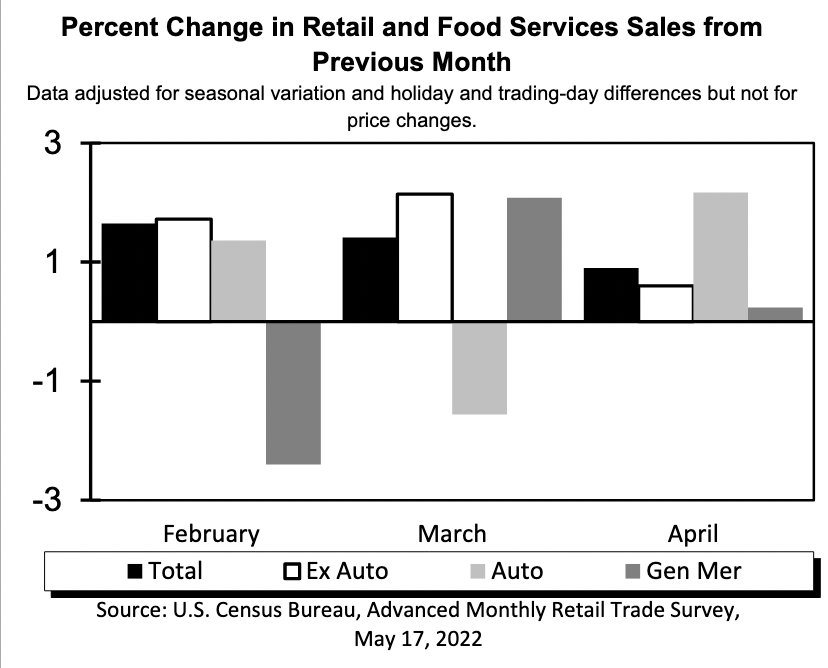 Consumers overall expressed less concern about mounting inflation in April, according to new numbers released Monday by the Federal Reserve Bank of New York. Median inflation expectations declined in April at the one-year horizon to 6.3% from 6.6% in March.

Another report Tuesday brought further good news. According to Federal Reserve data, industrial production rose 1.1% month-over-month in April, surpassing the 0.5% consensus estimate. At 105.6 percent of its 2017 average, total industrial production in April was 6.4% above its year-earlier level.

The steadfastness of the American consumer cheered Wall Street, at least temporarily. The major U.S. stock indices surged as follows on Tuesday: the Dow Jones Industrial Average +1.34%; the S&P 500 +2.02%; the NASDAQ +2.76%; and the Russell 2000 +3.19%. In pre-market futures trading Wednesday, stocks were taking a breather from their rally.

Spending on goods and services accounts for roughly 70% of U.S. gross domestic product (GDP), so consumers drive our nation’s economy.

The American consumer isn’t curbing spending, even though prices have soared at their fastest pace in 40 years. That’s a hopeful sign that counteracts fears we’ll see a stagnant economy combined with inflation.

Before the opening bell Wednesday, TGT shares were plunging. The retailer’s weak earnings results were weighing on the retail sector as well as the broader market.

Big box retailers this earnings season are generally performing well on the top line, but the bottom line is getting squeezed by higher costs. When major retailers such as Walmart and Target struggle, it tends to undermine overall investor sentiment.

Regardless, robust jobs growth so far this year has instilled consumers with greater confidence. Higher momentum in consumer spending could in turn beget a virtuous economic cycle that leads to more job growth and further spending. The wild card, of course, is inflation.

We’ll need greater clarity on inflation, before the equity markets find a bottom. If the market witnesses a period of easing inflation, it could be a catalyst for bond yields to stabilize and stocks to rally.

In the meantime, valuations have become more reasonable and fundamentals (e.g., overall corporate earnings) remain solid. Now’s a good time to put together a “wish list” of stocks that currently trade at more appealing valuations.

In this volatile market, where can you find these new growth opportunities? I can sum it up with a single word: takeovers. You might have heard them referred to as buyouts, mergers, or acquisitions. But no matter what you call them, when a takeover is triggered, the profits that spill out have life-changing potential.

In this era of war, inflation and pandemic, corporate consolidation is the name of the game. Even the whisper of a “mega-merger” can hand investors enormous returns.

My colleague Nathan Slaughter, chief investment strategist of Takeover Trader, just pinpointed a potential takeover deal that could dwarf them all.