It’s time for you to embrace sin.

Alcohol and tobacco, the so-called “sin” sectors, are defensive plays during economic downturns. Add cannabis to the list.

The overall stock market has been sliding lately, as key retailers miss first-quarter miss earnings projections and investors fret that a recession is around the corner.

Rising interest rates, hotter inflation, supply chain disruptions, war in Eastern Europe, and other risks are pushing the major stock market indices closer to bear territory. Many cannabis stocks have been caught in the downdraft, as investors shift to risk-off mode.

However, the investment thesis underlying cannabis remains stronger than ever. When the broader market starts to turn around, cannabis stocks are likely to stage an even sharper upward trajectory. Cash flows and operating results for bellwether marijuana companies have been robust so far this year, which is remarkable for an industry whose product is still banned at the federal level.

Now’s a good time to increase your portfolio’s exposure to recession-resistant industries. “Cannabiz” fits the bill. During economic booms and busts alike, consumers have shown a persistent need to buy cannabis, for recreational and medicinal purposes.

Indeed, during the worst of the coronavirus-induced economic downturn in 2020, cannabis sales soared as Americans hoarded pot. Marijuana has gone from demonized substance to essential service.

It’s not just the desire to get high. The need for new health treatments will gain urgency as the population ages. That’s a lasting tailwind for medical marijuana stocks, despite the economic cycle and the ups and downs of financial markets.

The size of the medical marijuana market surpassed $22.4 billion in 2020 and it’s estimated to generate a compound annual growth rate of 19.3% between 2021 and 2027, according to Global Market Insights.

Let’s look at the latest trends that are favorable for the cannabis industry and its investors.

From Reefer Madness to investor gladness…

As a teenager during the Nixon/Ford era, I was fed horror stories of young people’s lives “thrown away” over marijuana possession charges. You could get kicked out of college, lose your financial aid, and end up behind bars…even if a passenger in your car was found to have, unbeknownst to you, a small amount of personal marijuana.

Anyone who was daring enough to actually [shudder] grow a marijuana plant in their home faced particularly stiff criminal penalties. Such were the dark days of prohibition.

Cut to 2022, and lawmakers are brainstorming ways to assist citizens in cannabis cultivation.

New York City’s new mayor Eric Adams (D) recently expressed his approval for ideas such as growing marijuana in public and licensed rooftop gardens. His administration has vowed to seek a waiver to ensure protection for such operations from conflict with federal laws.

New York State Senator Jeremy Cooney (D) recently proposed a bill that would allow the state’s Cannabis Control Board to create regulations allowing individuals who do not have a residence suitable for personal cultivation (six plants are currently allowed) to grow their personal plants in a community garden.

Marijuana has evolved from scare stories to community gardens. Public attitudes certainly have changed. A recent Pew poll shows that 91% of Americans are in favor of marijuana legalization (see chart). 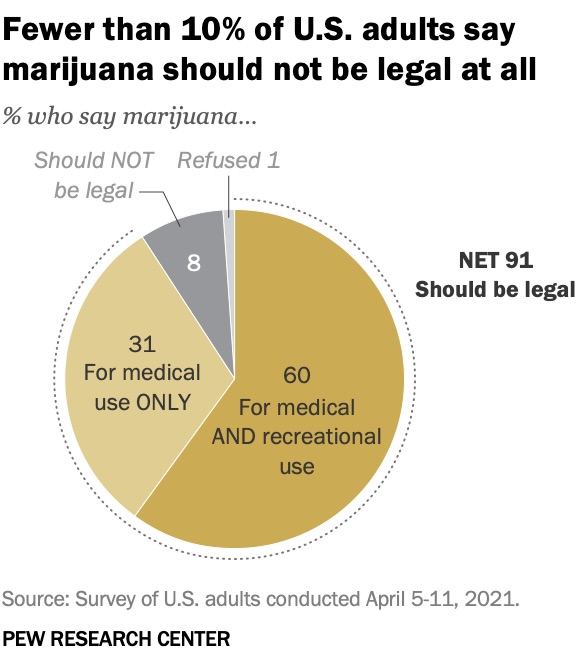 Marijuana is a unifying topic and people who hold a wide variety of beliefs all seem to agree: outlawing pot doesn’t make sense.

While American citizens and individual states are overwhelmingly in favor of legalization, the federal government’s approach remains one of disconnect and denial. As the state-level legalization movement continues to spread throughout the country, legal cases that showcase the conflict between state and federal policy frequently surface.

More pressure is being put on the Supreme Court to make a decision to bridge this divide. Justice Clarence Thomas (a staunch conservative) recently condemned the inconsistency that the federal government has displayed on the issue, suggesting that the continuation of national prohibition is not only illogical, but unconstitutional.

The U.S. Justice Department has no choice but to recognize the powerful momentum of the legalization movement but has so far failed to create any coherent policy.

The gap between federal prohibition and state legalization is all the more surreal, when marijuana’s ability to reduce harmful addictions is taken into account.

Numerous studies show that legalized marijuana for personal use has fueled a dramatic decrease in prescription drug use. But the use of marijuana goes beyond relieving dependence on prescription painkillers, “legitimate” or otherwise.

The availability of medical marijuana also can reduce the use of many other legal substances that have a less than harmonious relationship with the human body, e.g. sleeping pills, anti-depressants, and seizure medications.

These trends are resistant to short-term economic downturns. The mainstreaming of marijuana is making investors rich, in good times or bad.