That’s pretty good considering the supply chain disruptions that have made it difficult to keep store shelves fully stocked. However, the company increased its e-commerce revenue by only 1% over last year.

That’s not so good considering the inroads in online sales made by many other bricks-and-mortar retailers since the onset of the coronavirus pandemic. That probably would have been overlooked by Wall Street if the company had managed to maintain its operating margins.

That company acknowledged that the situation is likely to worsen given the paucity of unemployed service workers in this country. As a result, WMT fell more than 10% that day. 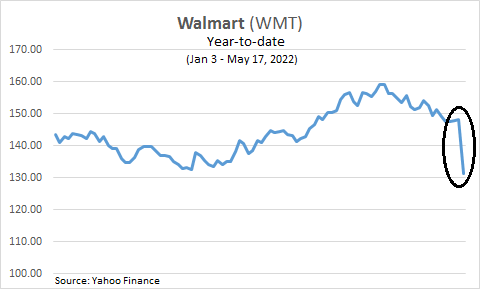 I do not point this out because I think Walmart has become oversold and is likely to rebound soon. The company also reduced its guidance for profitability during the current quarter due to ongoing supply chain problems and higher staffing costs. It may be a while until the company can expand its profit margin back to its prior level.

The big drop in Walmart’s share price also drove down the value of several other retailers. That’s because Walmart is a top holding in many retail sector funds such as the VanEck Retail ETF (RTH).

In fact, WMT accounts for nearly 8% of that fund’s total assets. Another retail stock that has gotten crushed lately, The Home Depot (NYSE: HD), comprises roughly 10% of the fund’s assets. Since the start of this year, HD has lost roughly a third of its value.

On the same day Walmart was hitting the skids, Target (NYSE: TGT) also fell even though it had no news to report. The fear was that what is bad for Walmart is probably also bad for the other big-box retailers, too.

Turns out, that fear was not unfounded. The following day, Target released its quarterly results that were even worse than Walmart’s. That day, Target lost a quarter of its stock market value.

Even after their big drops last week, those three stocks account for more than 22% of the fund’s overall performance. So when all of them are tanking at the same time, the other stocks in the portfolio suffer due to index rebalancing.

To my way of thinking, that type of indiscriminate selling creates an investment opportunity. Not all retailers will be as impacted by supply chain disruptions and inflationary pressures as those three.

The question is, which ones are they?

It appears that all of the major retailers are suffering equally at the moment. They have similar business models and are heavily dependent on overseas suppliers for most of their merchandise.

If my thesis is correct, then one of the smaller holdings in the VanEck Retail ETF that has been sold off along with everything else could be ripe for a rebound. The second-smallest holding in the fund is Bath & Body Works (NYSE: BBWI), which accounts for less than 1% of the fund’s total assets. Last week, BBWI fell 20% and is now trading at its lowest share price in over a year.

On May 19, Bath & Body Works released its Q1 results. Top-line sales came in at $1.45 billion, a 53% increase compared to the same period three years ago before the pandemic upended the economy.

I wouldn’t bet the ranch on it, but that’s the type of stock that could sneak up the charts without anyone on Wall Street realizing it. Currently valued at 10 times forward earnings, BBWI is essentially 40% cheaper than it was a year ago.

I don’t know how soon it may turn around, but when it does it could rapidly regain its lost market value. And as long as American consumers keep spending, it’s only a matter of time until that happens.

A Note From The Publisher: Our colleague Jim Pearce just provided you with profitable insights into the retail sector. There’s another sector that deserves your special attention right now: marijuana.