Welcome to my latest video presentation. Below is a condensed transcript; the video contains additional charts and details.

Has the market bottomed? Trying to time such occurrences is always risky. But if we haven’t already seen “capitulation,” we’re darn close.

And keep this in mind: over the past five decades, the stock market has racked up an average return of 17% in the six months after the market bottoms.

Consider the last two major stock market downturns, in 2018 and 2020. During both scenarios, markets rebounded strongly and fairly quickly. As I explain below, we could be witnessing conditions for a similar recovery in stocks.

That said, equities continued tumbling last week; Wednesday represented the largest one-day decline in the S&P 500 since June 2020. Stocks fell for the seventh consecutive week, with the S&P 500 down more than 18% (see table). 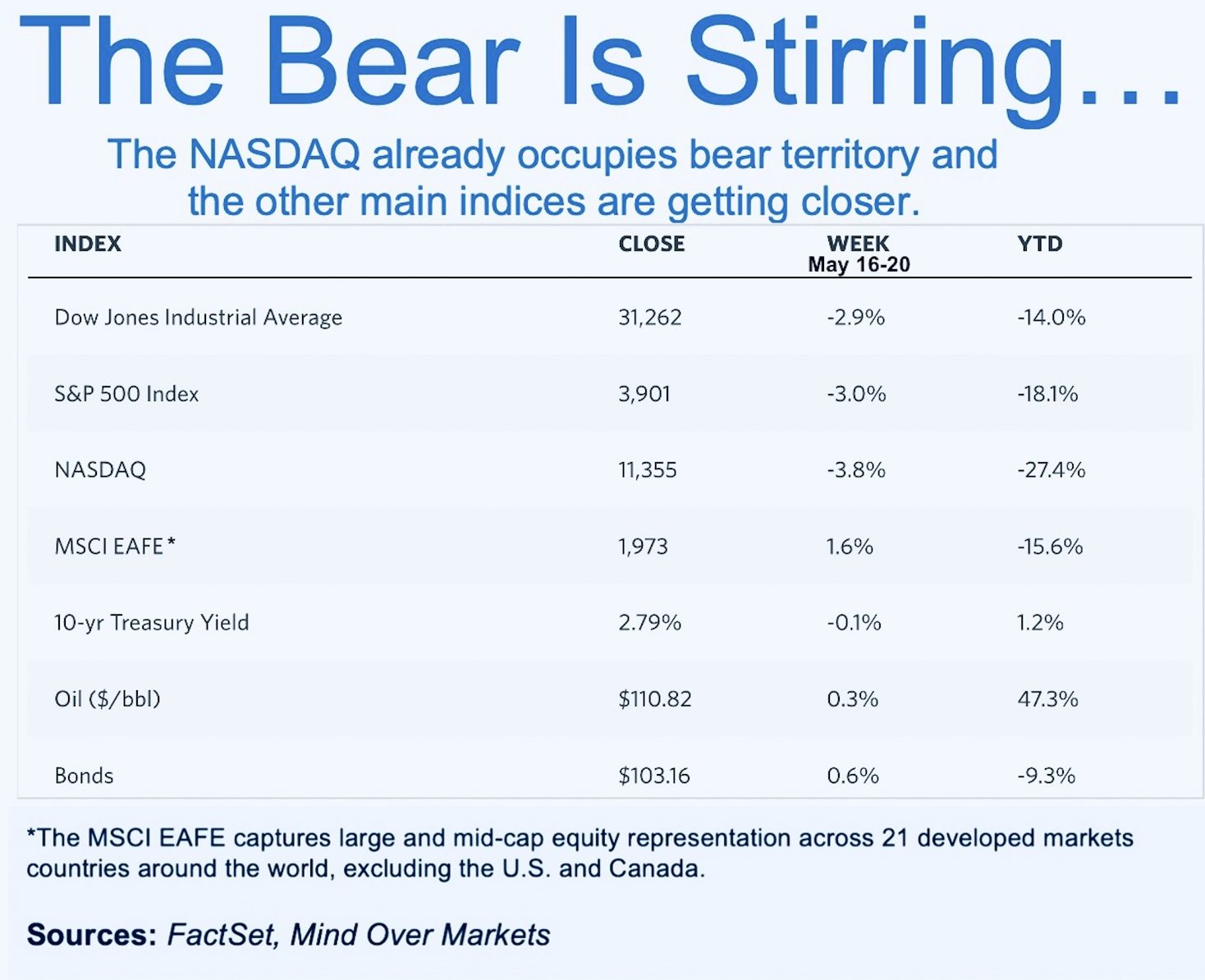 Investors were spooked by disappointing quarterly earnings reports from bellwether retailing giants Walmart (NYSE: WMT) and Target (NYST: TGT). Both “big box” chains missed on the bottom lines, due to pressure on profit margins from higher labor and input costs. But therein lays a contradiction, and also a ray of hope: consumer traffic remained strong.

Despite rising inflation, the American consumer hasn’t pulled back. Retail figures for April were robust. It’s true, consumers are tilting toward bargain brands and stores these days, to combat higher prices, but the problem in the retail sector derives on the supply side and not with customer demand.

Investors seem to be interpreting the latest retail operating results as canaries in the coal mine; the consensus is that more pain is to come.

But in this investment movie, the cavalry (in the form of the Federal Reserve) won’t be riding to the rescue of the stock market. The analyst consensus is for a 50-basis-point hike in the fed funds rate, currently set at 0.75%-1.00%, at the June policy meeting following a similar hike earlier this month.

Fears of higher interest rates, recession, and runaway inflation have put Wall Street in a punishing mood, across the board in all sectors.

But during earnings conference calls, aside from digesting the hard numbers, you should also listen to commentary from top managers. What they say about the future is important, and on that score, I’m encouraged.

Notably, in calls with analysts, CEOs at the major retail stores reported that they expect foot traffic in the summer to be strong. They also expect supply chain disruptions to ease. The retail stocks that got clobbered last week now sell at deep discounts; this is your chance to scoop up intrinsically sound equities for low valuations.

I continue to see a litany of positives: a resilient consumer; low unemployment with rising wages; and solid corporate earnings growth. For Q1 2022, the blended earnings growth rate for the S&P 500 is 9.1%, according to FactSet.

Here’s another positive factor: by front-loading its rate hikes to combat inflation, the Fed has given itself wiggle-room for rate cuts when it appears that inflation is easing, which in turn would serve as a catalyst for an upward surge in stocks.

I advise putting together a shopping list of once-pricey stocks that you’ve wanted to own. Cautiously build positions. Where can you still find these reasonably valued growth opportunities? I can sum it up with a single word: takeovers. Even the hint of a major corporate merger can generate outsized investment returns.

My colleague Nathan Slaughter, chief investment strategist of Takeover Trader, just pinpointed a “mega-merger” in the offing. When it comes to anticipating takeovers, Nathan is the savviest analyst I know. Click here for details.