Why Investing Isn’t a SNAP

The concept behind the Snapchat app, the core offering of Snap (NYSE: SNAP), is that pictures and messages are only available for a short time before they become inaccessible. Youngsters around the world love to Snapchat their latest misadventures to their friends, but I’ve always scratched my head over Snap as an investment and the Snapchat app as an activity.

Wall Street is catching up with my attitude.

Equity markets finished lower Tuesday, weighed down by an ominous profit warning from Snap. The tech-heavy NASDAQ was caught in the downdraft and extended its year-to-date underperformance.

Snap CEO Evan Spiegel on Monday issued a profit warning ahead of the company’s July earnings release. Spiegel said: “The macro environment has deteriorated further and faster than we anticipated when we issued our quarterly guidance last month.”

Headquartered in Venice, California, Snap was founded in 2010 and went public in March 2017. In the immediate wake of its initial public offering (IPO), Snap shares spiked more than 41% to value the loss-generating company at a whopping $33 billion. The company’s valuation has since fallen to $20.9 billion. The stock’s year-to-date return is -72.80% (as of market close Tuesday).

The timeless lesson: Beware of tech companies with trendy products, but weak fundamentals, that rely on ebullient investor sentiment to keep the stock up. This isn’t a viable investing strategy.

Snap is not a big player in terms of its market valuation or technological innovation, but the company’s dire preannouncement provided a wake-up call that earnings headwinds could be worsening. So far, first-quarter earnings season has told us that consumer demand is generally resilient, but inflation and supply chain problems are squeezing profit margins.

And yet, don’t lose sight of the positives. Corporate profits overall are strong, staying elevated in the 10% range (year-over-year). Global brand name companies with pricing power are proving particularly adept at weathering the challenges.

After the recent spate of sell-offs, frothy valuations have come back to reasonable levels, with the S&P 500’s price-to-earnings ratio currently back to its 10-year average. Bargain hunters, take notice.

The S&P Global Flash US Manufacturing PMI, released May 24, indicated that business growth hit a speed bump this month, but activity continued to expand (see chart). 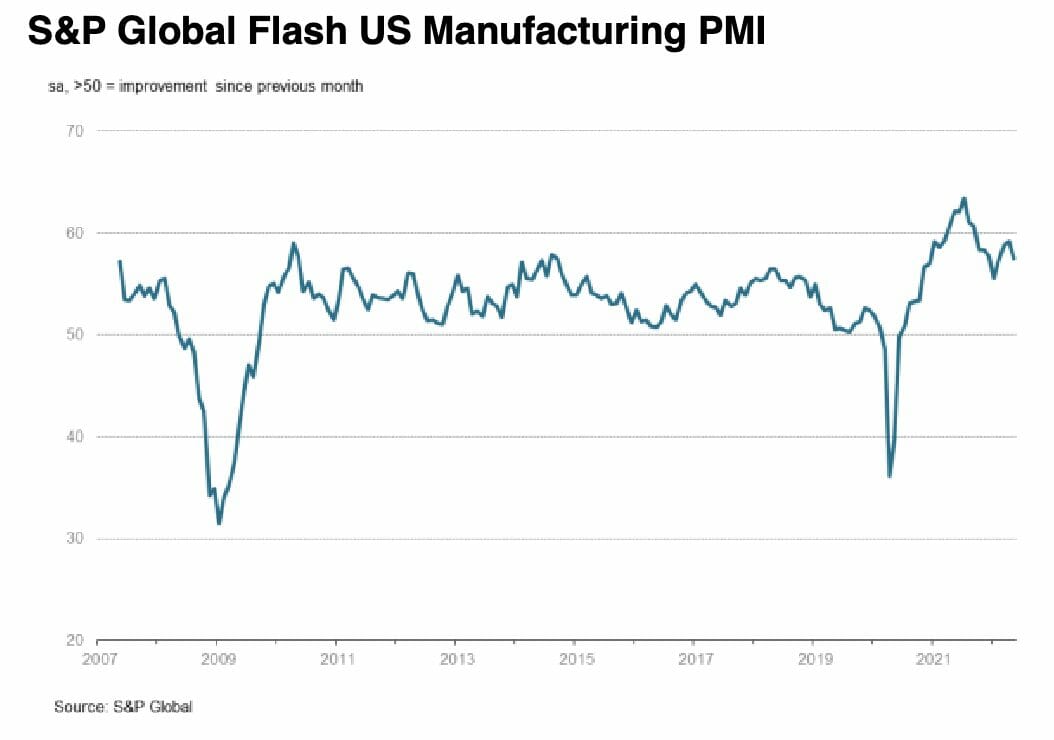 The PMI fell to 57.5 in May 2022 from 59.2 in April, pointing to the slowest growth in factory activity in three months. However, the reading came in line with expectations and underscored solid growth supported by sharp expansions in output and new orders, together with steep increases in jobs growth. In a good sign for companies with supply chain challenges, the PMI reading also pointed to longer supplier lead-times.

That said, new home sales racked up a bigger-than-expected decline in April from March, as affordability got worse due to rising interest rates and a continuing shortage of housing stock.

The economy still shows underlying strength. Consumers have low debt and the labor market is tight; the retail purse strings remain relatively loose. Corporations are plagued by eroding profit margins because of inflation, but the top and bottom lines are still elevated.

Investing conditions should improve. It’s my view that inflation will moderate in early 2023, prompting the Federal Reserve to take a less hawkish stance. Geopolitical uncertainty also will ease (history shows that it always does).

Yes, we should eventually enjoy a sustainable stock market rally. But it will take time. It won’t be a snap.

PS: Looking for new areas of investment growth? Consider reading my new book: The Wide World of Weed and Psychedelics. It’s your definitive guide for making money in the thriving cannabis and psychedelics industries. Click here to get your free copy.