One way to get a quick take on the stock market is to see which stocks are getting the most attention online. According to financial brokerage XTB, the most searched stocks in the United States are Tesla (NSDQ: TSLA), Apple (NSDQ: AAPL), and NVIDIA (NSDQ: NVDA).

That doesn’t surprise me since all three of those companies are industry leaders. And despite their recent pullbacks, they have made their longtime shareholders a lot of money over the past five years.

But recently, each one of them has suffered a sizable share price decline. Since the start of this year TSLA is down 48%, AAPL has lost 23%, and NVDA has taken a 46% haircut.

That has a lot of people wondering if now is a good time to start buying into those names. So the thinking goes, if you liked Tesla at $1,200 a share seven months ago then you should love it at less than $700 a share today.

However, just because these stocks appear cheap does not necessarily mean that you should buy each one of them. Instead, I suggest you consider a different way to play a rebound in those names along with several other industry leaders.

In January 2021, I wrote an article about Elon Musk’s aura of invincibility. I said then that Musk “is the man that can do no wrong in a stock market that will only go up.”

That may no longer be the case given Tesla’s recent swoon. But I adamantly believe that Musk’s pioneering of the electric vehicle (EV) industry will be his lasting legacy.

In that same article, I suggested buying shares of the Global X Autonomous & Electric Vehicles ETF (DRIV). In addition to automakers such as Tesla, the fund owns shares of EV technology hardware and software developers.

You may be surprised to learn that Apple is the fund’s largest position. Tesla and NVIDIA are also among its top holdings.

That’s right; the same stocks that have been getting slammed this year also account for nearly 9% of this fund’s overall performance. For that reason, DRIV is down 26% this year and is back to where it was in December 2020. 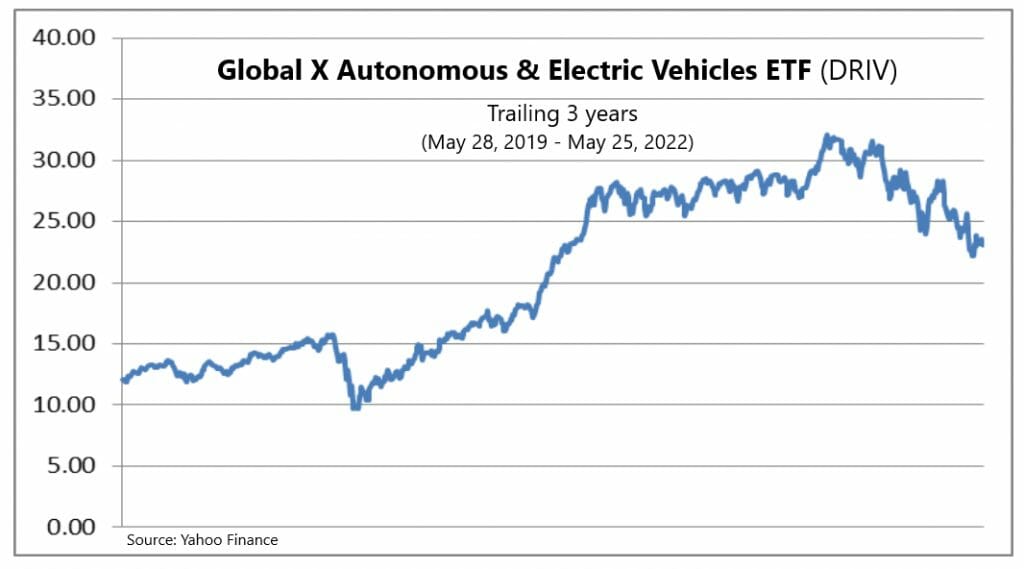 I don’t know if that makes DRIV a bargain or not. But what I do know is that a lot of very good names are held in this portfolio and right now nobody seems to want to really own them.

That spells opportunity in my book. What all of those stocks have in common is that they are major contributors to the EV market.

I don’t pretend to fully understand all of the subtle nuances of how Apple’s smartphone business is impacted by changes in consumer sentiment. But I am confident that the EV market will continue to grow no matter which automakers end up dominating the market.

Two months ago, S&P Global Platts Analytics raised its forecast for EV sales by the end of this decade by 23%. I’m sure record-high gasoline prices influenced that revision, as did the growing influence of the ESG (environmental, social, and governance) movement on Wall Street.

The one thing that I am absolutely sure of is that the EV market will continue to grow. And while I can’t say which companies will end up dominating that market, doubtless DRIV will be holding them in its portfolio.

I’d much rather own Tesla, Apple, and NVIDIA as part of a well-reasoned investment thesis than as a wager on a stock market rebound. Sooner or later, that type of investment will pay off in a big way.

In fact, our investment team has just uncovered the first “Apple” of the EV industry! One unusual, under-appreciated company is secretly siphoning the EV industry’s trillion-dollar profits into investor accounts over and over again, like clockwork. Want to get in on the action? Click here for details.