India: Your Portfolio’s “Jewel in the Crown”

Many reasons have been cited for the stock market’s explosive growth. Among them are cheap labor, historically low interest rates, and the proliferation of information technology.

To be sure, all of those factors played a significant part in the rise of the United States as an economic superpower. Each one of them contributed to a huge increase in productivity and efficiency.

But there is another factor often overlooked. During most of that 40-year span, most of the baby boomer generation was gainfully employed.

Now that the youngest of the baby boomers is nearly 60 years old, most of them are no longer working. Instead of saving for retirement by investing in the stock market, they are taking withdrawals to supplement their Social Security benefits.

Not only are they no longer economically productive. They are also rapidly increasing the cost of Medicare and other taxpayer-subsidized government programs.

That does not bode well for the next 40 years in this country. But it did get me to wondering where else in the world might another baby boomer-sized generation still be in its prime.

In the United States, more than 16% of the population is at least 65 years old while less than 19% is under 15. From a long-term perspective, the economic implications of those numbers are profound.

For that reason alone, I recently made a personal investment in the iShares MSCI India ETF (INDA). After cresting above $50 eight months ago, INDA fell below $41 last month as the global economy sagged under the weight of rising inflation and supply chain bottlenecks. 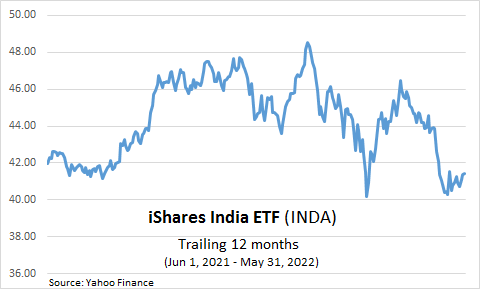 To be clear, I am not attempting to time the market. I have no idea which direction India’s stock market may turn next.

However, having the opportunity to buy into its stock market at a 20% discount was too tempting to pass up. With a population of 1.4 billion, India accounts for roughly 18% of all the people in the world.

In addition, India’s population is growing faster than most other developed countries. Its annual growth rate of 0.95% is far higher than China (0.29%) and the United States (0.57%), the first and third most populated countries in the world.

Changing of the Guard

I don’t often do this, but I made this investment without even looking at the fund’s top holdings. From a long-term perspective, I don’t care what they are and I’m sure they will change over time.

Forty years ago, the top twenty names in the Fortune 500 list of America’s largest corporations included General Motors (NYSE: GM), IBM (NYSE: IBM), and DuPont (NYSE: DD). All three of those companies are still around but are no longer the industry juggernauts they once were.

Likewise, I cannot foresee how technological developments, geopolitical hegemony in Asia, and constantly shifting consumer behavior will alter India’s corporate hierarchy over time. However, I feel certain that India’s future industry leaders will rank among the biggest companies in the world.

I don’t know if India’s stock market will grow at the same rate ours did, but it could. India’s middle-class population is projected to grow at an 8.5% annual rate over the remainder of this decade.

That’s important since middle-class consumers buy a lot of stuff. Instead of renting apartments, they purchase new homes. Rather than get around town on a scooter, they upgrade to an automobile.

I consider my stake in INDA as a “set it and forget it” type of investment. I won’t watch it closely, and I won’t sell it if it hits the skids. Instead, I’ll just sit on it for a long time and hope that its rapidly expanding population does for India what the baby boomers did for the United States.

Editor’s Note: You’re just in time! Dr. Duarte’s inflation-proof income summit is “on air” now. You don’t want to miss his latest investment insights. He’ll show you, step-by-step, how to repeatedly cash in, week after week. The money-making techniques you’ll learn are powerful and potentially life-changing. Click here to grab your spot.