Good Stuff: How to Pick The Best Pot Stocks

Let’s be clear: Marijuana is a commodity. The only issue for buyers is quality. Once the bad players are weeded out (pun intended), there will be a fight over market share. In commoditized businesses, that results in price wars.

Price wars lead to declining prices, which is not what you want as a stock owner.

That said, if you ignore the “green rush,” you’ll be leaving money on the table. Let’s look at a few basic criteria you should follow when investing in cannabis equities.

Some marijuana companies are “pure play” stocks, in that they grow, market and sell cannabis products exclusively. Others provide some form of infrastructure for those businesses.

Pure plays offer the greatest risk and greatest rewards. More conservative investors may prefer to have smaller exposure to the sector. Be vigilant. The SEC has issued warnings about fraudulent marijuana stocks.

I’m talking about penny stocks that trade on the pink sheets. That’s dangerous territory, especially in the marijuana industry, which is susceptible to exaggerated claims, financial irregularities, and pump-and-dump schemes. That’s why I’m particularly rigorous when it comes to the cannabis sector.

It’s also why I like “picks-and-shovels” plays, rather than growers of cannabis. They tend to make more reliable profits, much in the same way that the people who made money in the gold rush weren’t the miners, but the folks who sold picks and shovels.

The best marijuana stocks will have at least one of these three characteristics, preferably all three:

The persistent federal ban creates risk for all marijuana stocks. With the flick of a pen, marijuana use and even cannabis by-products, like oils, could be outlawed. That could wipe out tons of business. I don’t think that will happen, but federal prohibition has weighed on the marijuana sector’s potential. Legislation to remove the federal ban has passed the U.S. House, but currently languishes in the 50-50 U.S. Senate.

Any company that wants to move into the cannabis space in a meaningful way will need a lot of working capital. The capital isn’t just needed to produce and distribute the product, but to engage in R&D and survive price wars.

Cannabis companies feature similar traits to pharmaceutical firms, in that they must constantly innovate and improve on their products to maintain competitiveness.

Any successful marijuana company will eventually have to make a profit; many never do. There’s a danger with commoditized businesses because they can throw tons of money at selling their products, but the margins are so low that profits may be difficult to come by. That said, a company that’s losing money is worthy of investor patience, if it’s pursuing a growth strategy that appears likely to pay off down the road.

What else do I look for in a marijuana stock? I’m partial to multi-state operators (MSOs), which boast economies of scale and market power. The following chart underscores why: 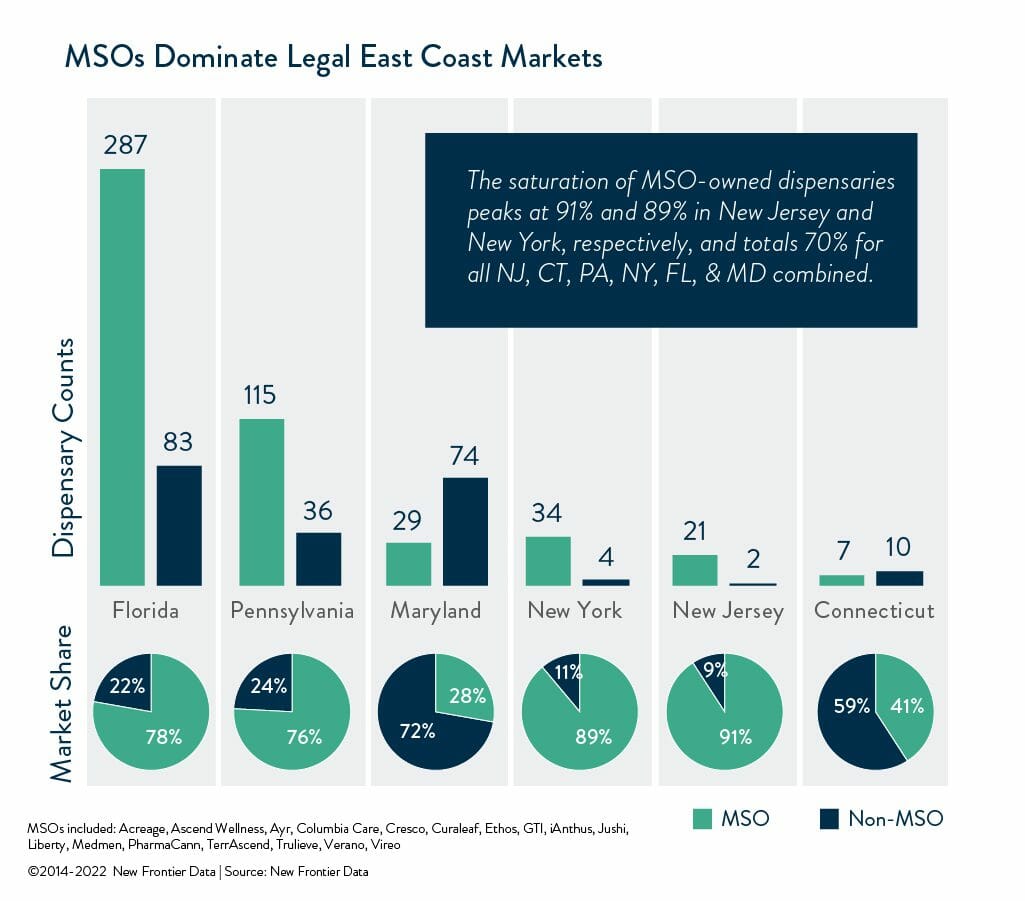 Among other favorable criteria for a cannabis investment: the company must have quality management; a solid balance sheet; and a competitive edge against industry rivals. A common red flag is excessive debt, without sufficient revenue to cover liabilities.

The federal ban makes it difficult for marijuana companies to access financial services. Bankers are leery of pot companies, because they fear federal blowback, which means insufficient cash flow and mounting debt are common problems in the sector.

In the meantime, are you worried about inflation, recession, and rising interest rates? The marijuana industry as a whole is resistant to macroeconomic ups-and-downs. The mainstreaming of marijuana is making investors rich, in good times or bad.

Your portfolio needs exposure to marijuana stocks, but as I’ve just explained, selectivity is key. Indiscriminate investing in cannabis can lead to disaster. Opportunities abound in the sector, but so do risks.