How to Keep a Cool Head Over Hot CPI Data

Ugh. The much-anticipated consumer price index (CPI) report for May arrived early Friday morning. Inflation came in much hotter than expected, sending stocks sharply lower. Yet another breakfast ruined by the CNBC chyron.

Below, I’ll show you how to stay invested, without getting paralyzed by bad news. But first, let’s face the latest CPI numbers. To quote an old pop song, they were hot hot hot.

The U.S. Bureau of Labor Statistics (BLS) reported Friday that the headline CPI in May rose 8.6% over the year versus estimates of 8.3%. That’s the highest rate since 1981. Month-over-month, the CPI rose 1%, versus expectations of 0.7%.

Core inflation (excluding the volatile food and energy sectors) was up 0.6% in the month and 6.0% over the year (see chart). 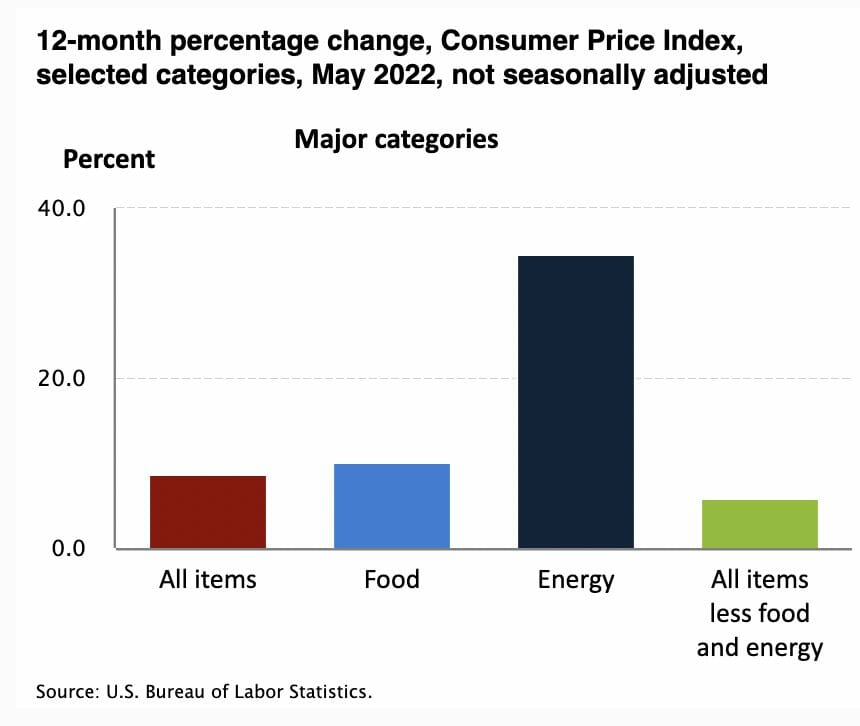 After the opening bell Friday, the main U.S. stock market indices promptly (and predictably) hit the skids. The Dow Jones Industrial Average, the S&P 500, the NASDAQ, and the Russell 2000 were all trading deeply in the red. Markets are currently pricing in three half-point Federal Reserve rate hikes by the end of this year. The 10-year Treasury note rose above 3%; tech stocks are getting hammered.

Those are troubling inflation numbers, to be sure. But as always, perspective is required. Much of the pain that people feel reflects inflationary forces that are real, but unlikely to persist. Headline inflation in May was partly driven by a 10.1% rise in food prices, and a staggering 34.6% rise in energy (mostly due to gasoline prices). As of this writing, the national average price of gasoline was $4.98 per gallon.

Blaming corporate greed is nonsensical as well, because companies are in business to make a profit and when input costs increase, they have to raise prices. Even strong pricing power, as wielded by global purveyors of branded consumer products, has its limits. Are some companies taking advantage of inflation to boost their bottom lines? Yes, of course. But it’s not the main dynamic behind inflation.

Americans are understandably gnashing their teeth over inflation, but keep in mind, inflation is a global phenomenon, largely fueled by the pandemic and the Russia-Ukraine war. COVID and Russia’s invasion represent a pair of black swans that bedevil supply chains and raw material accessibility.

Take a look at the following chart: 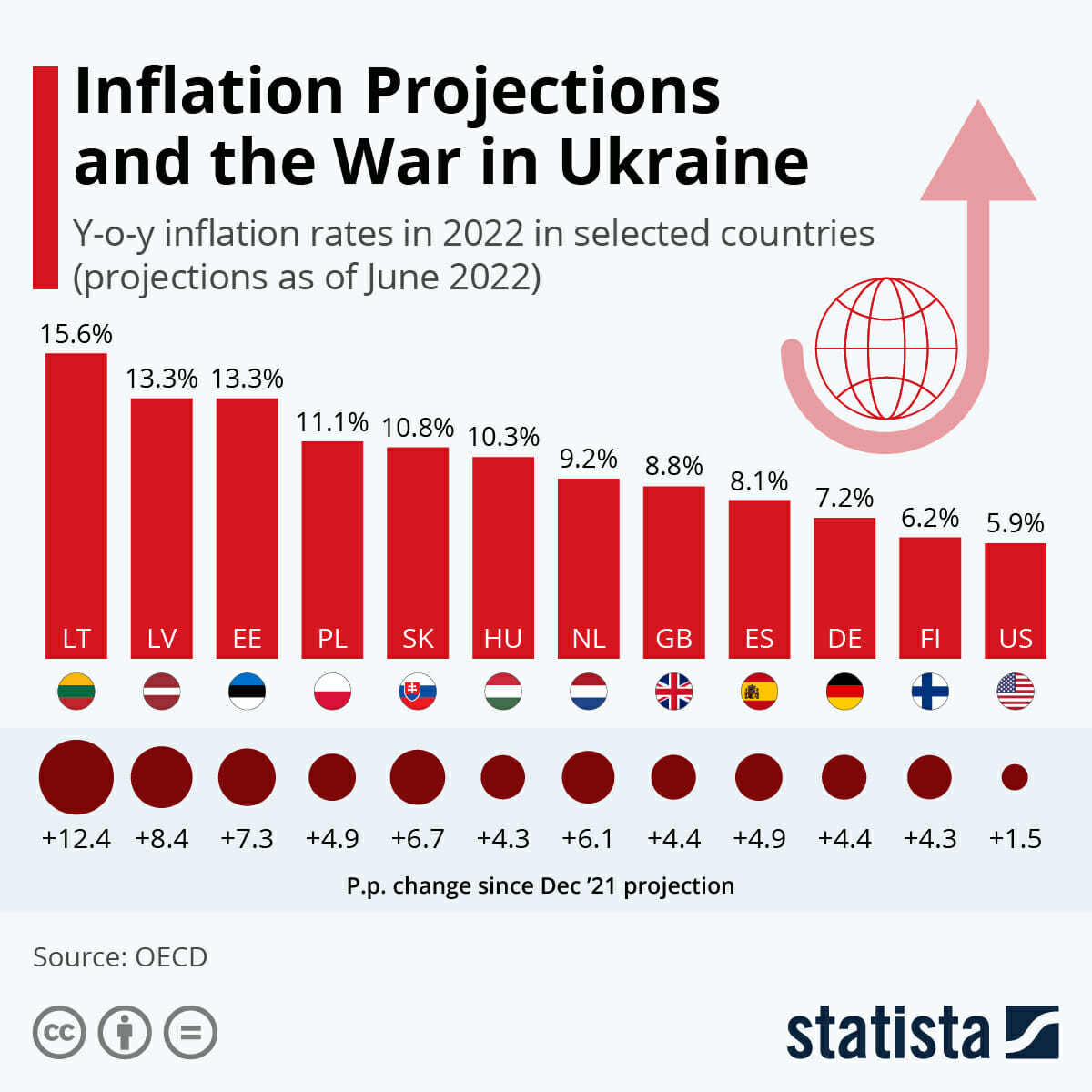 The pain of soaring consumer prices is especially acute in Europe and countries neighboring Ukraine. Eurozone inflation reached a record 8.1% in May (estimated), amid skyrocketing energy and food costs. Annual inflation in the 19 countries that use the euro currency surged past the previous record of 7.4% reached in March and April, according to the latest data from the European Union statistics agency, Eurostat.

Surging inflation, largely caused by supply chain disruptions and resource scarcities, is disproportionately hurting low-income people. Prices for crude oil, food and shelter are going through the roof. The interruption of grain supplies from Ukraine, the world’s breadbasket, is causing not only higher grocery prices but also exacerbating food insecurity and hunger.

What’s more, financial experts estimate that Russia’s invasion of Ukraine will drag the country’s economy back to 2007, erasing 15 years of gains.

Here’s a glimmer of hope: The Organisation for Economic Co-operation and Development (OECD) predicts that pressures on supply chains and commodity prices will eventually ease by early 2023. In addition, the effects of higher interest rates should also help quell inflation. That said, core inflation is expected to remain elevated in most major economies throughout the summer.

What it means for investors…

Whether inflation stays hot or starts to cool, it’s nonetheless a stealthy wealth destroyer. Taxes on capital gains, dividends and nominal interest on investments are not inflation-indexed; neither are various income taxes in some states. Unprepared investors could face higher stealth taxes, or an “inflation tax” as it’s known, and suffer significant wealth destruction.

As inflation keeps rising, investors will need higher nominal sums to keep up with retirement expectations in the face of deteriorating purchasing power. This problem is pervasive for every income level and asset class, because 401k plans incur a capital gains tax when funds are withdrawn in retirement, unlike defined benefit pension plans which are indexed to inflation.

In a progressive tax system, failure to index the brackets to inflation will eventually result in effective tax increases if inflation is sustained, as inflation in wages increases individual incomes and moves individuals into higher tax brackets with higher percentage tax rates. Put simply, this “inflation tax” results in higher tax burdens on taxpayers, usually without their knowledge or consent.

Investors that are hedged against inflation are in a much better position to survive it. That’s why you need the advice provided by our premium trading service the Weekly Cash Machine, helmed by my colleague, Dr. Joe Duarte.

Dr. Duarte’s inflation-proof income summit is “on air” now. You don’t want to miss his latest investment insights. He’ll show you, step-by-step, how to make money while simultaneously keeping inflation at bay. Click here to secure your spot.