Survival Tactics for a “Revenant” Market

Metaphor alert! Last night, this bear market put me in the mood to re-watch the 2015 film The Revenant, in which a fur trapper played by Leonardo DiCaprio gets attacked by a bear. His companions leave him for dead in the frigid wilderness, but despite his grievous wounds, he survives.

A “revenant” is a person who has returned from the dead. Likewise, if your portfolio has been mauled by the bear, your holdings can live to see another day. Below, I’ll steer you toward a survival tactic that not only beats the bear, but also generates robust and steady income.

Meanwhile, we’re officially in a bear market, which is generally defined as a 20% or more decline from a high. On Tuesday, the main U.S. stock indices performed as follows: the Dow Jones Industrial Average -0.50%; the S&P 500 -0.38%; the tech-heavy NASDAQ +0.18%; and the small-cap Russell 2000 -0.39%. In pre-market futures trading Wednesday, the indices were attempting a comeback.

Stocks have been getting mauled, with the S&P 500 in bear market territory for the first time since the coronavirus pandemic outbreak in March 2020.

During the coronavirus-induced crash in 2020, the S&P 500 bottomed out only 33 days after its previous high, representing the shortest bear market on record. What followed was a powerful bull market that was eventually derailed this year by supply chain disruptions, rising inflation, the Russia-Ukraine war, and the Fed’s monetary tightening.

The rising cost of gasoline also has a demoralizing affect on the populace, with the average price nationwide now exceeding $5 per gallon (it’s more than eight bucks a gallon in parts of California).

As with real-life bear attacks, bear markets aren’t common occurrences. However, examining previous bear markets going back to the Nixon/Ford era shows that stocks could fall a lot further.

In the previous seven bear markets, the S&P 500 fell by an average of 38% before turning around. It often took years before the index had recouped all of its losses and returned to its previous peak (see chart). 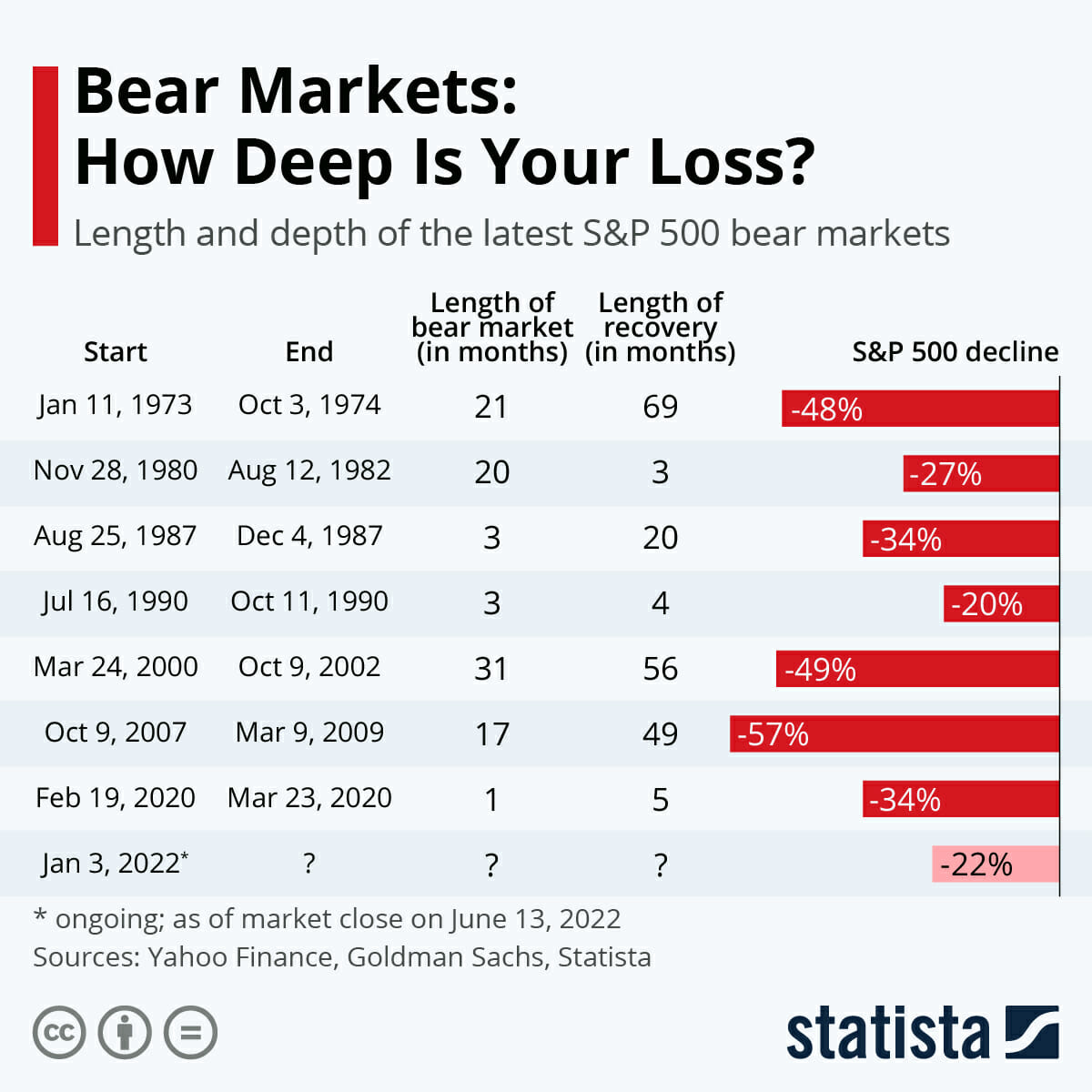 However, when it comes to stock slumps triggered by the rate hike cycle, we’ve seen this movie before.

The current Fed-induced decline is an echo of the previous tightening cycles of 1994 and 2018, during which investors worried that monetary policy was getting too hawkish. Equities fell 8.9% in 1994 and 19.8% in late 2018, but over the following six months, posted respective rebounds of 5.2% and 25.3%. We face additional headwinds this time around not related to the Fed, but the historical examples are instructive.

I think super-investor Peter Lynch said it best: “Never get out of the market.”

In these perilous market conditions, if you’re a new retiree or your golden years are around the corner, you must emphasize preservation of capital without incurring a disproportionate opportunity cost.

Read This Story: Prune Your Portfolio for Healthy Growth

While no one knows for sure how long or deep this market slump might be, income investors, in particular, should bear-proof their holdings.

But here’s the rub: If you’re in or nearing retirement, you can’t afford the time nor income of taking a big hit. You must adopt a practical and not historical approach.

Most investors, especially income investors who are about to retire or can’t rely on a paycheck, aren’t able to weather a crash that clobbers their portfolios at exactly the time that they’re withdrawing income.

The good news is, my colleague Robert Rapier boasts a track record of generating outsized income regardless of market conditions.

As the chief investment strategist of Rapier’s Income Accelerator, Robert has devised an investing method that allows him to extract multiple payments from the same stock over and over again, whether the broader market is going up, down or sideways.

Robert calls it his “Dividend Multiplier” and it has reaped steady riches for his followers. Armed with his money-making system during the bear market, you’ll not only survive…you’ll also thrive. Click here to learn more.