In football, baseball, and investing, winning is all about the fundamentals. This is especially important when the game isn’t going your way.

In fact, there’s an old saying which summarizes the best way to regroup: when you’re in a losing streak, go back to the fundamentals.

In football it’s all about blocking and tackling.

In baseball it all boils down to pitching and keeping your eye on the ball when you get up to bat.

And in investing, it’s all about anticipating the future while managing risk in the present.

The Past is Gone

The COVID pandemic and the subsequent war in Ukraine have changed everything, at least what most of us took for reality.

The story is nowhere near finished, so a lot can still happen as the ripples of the “chaos pond” continue to spread throughout the global landscape. But those of us who hope to still be trading stocks in the next few years have to start somewhere.

The Principles of Good Investing

There are three important principles to stay in the investment business:

The One Price Chart That Tells the Story

If I were on a desert island with an Internet connection and was given a choice of one price chart to review, I would choose the New York Stock Exchange Advance Decline line (NYAD). 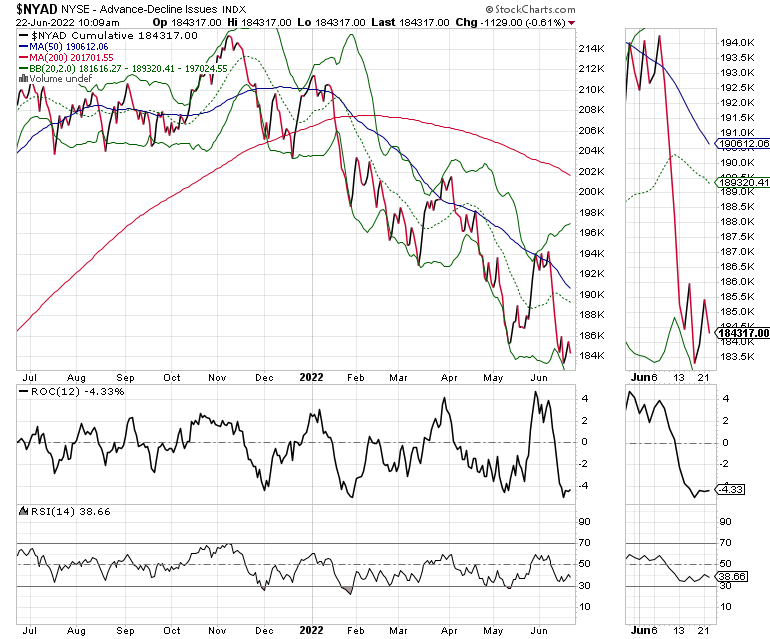 That’s because this one indicator offers the most reliable, in my opinion, opportunity to gauge the status of the stock market.

When gauging the trend consider the following:

Also note that NYAD broke down after the Federal Reserve began to forecast its upcoming higher rate cycle in late 2021-early 2022.

The stock market is a tough place. Yet when this bear market is over, the new bull market will make being patient through these tough times well worth it. If you anticipate the future and manage risk, that is.

That’s because higher interest rates can slow, but can’t stop the macrotrends that were in place prior to the start of the rate hikes and they most certainly can’t stop the rebound once they reverse rates.

The Housing Sector is Creating a Bargain Bonanza

The current data for housing is horrible. Mortgage rates are rising. Housing starts, new home and existing home sales are cratering. And homebuilder and homebuyer sentiment are cratering.

But the fact remains that inflation and the ongoing post-COVID reality is increasing the number of people migrating from high tax, high gasoline price, and high rent states to the sunbelt. Meanwhile, the lack of housing supply which began in 2008 and expanded due to the relocation spurned by COVID hasn’t changed dramatically.

Experts tell us that the housing sector will eventually collapse. And they certainly could be correct. It’s happened before. And in the present, the housing stocks look dismal.

Yet, time after time we get earnings reports from homebuilders which beat estimates. And although the companies are clearly growing cautious, they continue to run their businesses.

Maybe they’re whistling past the graveyard. But maybe they’re betting on the big macro demographic shifts. Maybe they’re trading on what they’re seeing.

For example, in my neighborhood, a new row of townhomes is rising and the builder is laying out his next pad, next to the ones where the framing is almost done. A couple of miles away, I’m seeing a similar development.

I realize that this may be a regional phenomenon and that just as in the past homebuilders are known for overbuilding and eventually going bankrupt.

And certainly, there is no guarantee that everyone who wants a better place to live will be able to get one. But from a supply-demand standpoint, homebuilders and landlords (those who survive the Fed’s rate hikes) will be in a favorable position once things level out.

Technical analysts, those who make buy and sell decisions based on price charts, are likely cringing when they review those of the homebuilder stocks. 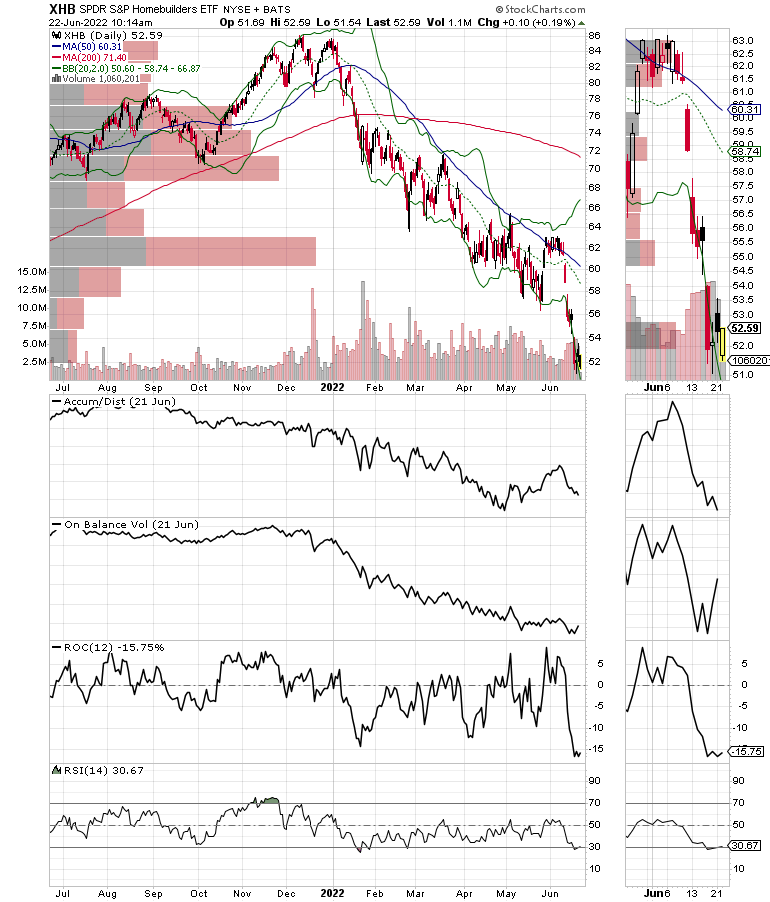 The S&P SPDR Homebuilders ETF (XHB) certainly tells a tale of misery. It features a litany of negatives including:

In other words, sellers and short sellers are overwhelming the buyers in this sector

The charts are horrible. But the homebuilder stocks are dirt cheap.

I picked five homebuilder stocks randomly and reviewed their present valuation criteria based on their price-to-earnings (P/E) ratios and compared them to the S&P 500.

What the figures clearly show is that homebuilders are classic value stocks at the moment. Indeed they are selling at roughly one fifth of the value of the stock market as measured by the S&P 500.

There’s a lot of handwringing going on at the moment. Certainly, it’s justified, at least to some degree given the current state of the financial markets.

Yet, as the data for the homebuilders show, there are bargains to be had which at some point will attract value investors.

Given the Fed’s messaging about the continuation of its rate hikes and the negative effect this has had on the stock market, it may not be time to jump into housing stocks with both hands. But it’s also a time to be keenly aware of the value that is being created in this market.

After all, the fundamental principles of successful investing are managing risk in the present while anticipating the future.

I own shares in DHI, LEN, and GBRK in my private investment account.

PS: Dr. Joe Duarte has pinpointed a tiny, unknown company that has developed a revolutionary “black box” technology. You need to get in on the ground floor of this game-changing opportunity before the investment herd finds out and sends the share price soaring. Click here for details.