I recently re-watched John Ford’s Rio Grande (1950), starring John Wayne, in which white children abducted by Apaches are rescued in the final reel by the U.S. cavalry. This Hollywood trope made me think of the Federal Reserve.

Investors are accustomed to the Fed riding to rescue when unexpected shocks drive the market down.

Consider the 1998 Long-Term Capital Management blow-up, the 2001 dot.com bust, the 2009 mortgage implosion, and the 2020 COVID-caused crash. Following each of these events, the Fed swooped in to save the day. Whether a dramatic cut in interest rates or a bond buying binge to feed credit to the market, the Fed’s intervention stemmed the bleeding.

But this time around, the script is different. The Duke isn’t coming. As the U.S. central bank grapples with rapidly rising inflation, monetary salvation is off the table.

Read This Story: How to Play an Inflation-Driven Bear Market

Investors can withstand short, swift downturns. However, when week after week of selling erodes their retirement balances, they get nervous.

The major U.S. equities indices have experienced their worst first six months of any year since 1970. Central bank hawkishness and soaring inflation are clobbering investor sentiment.

Russia’s invasion of Ukraine shows how quickly geopolitical events can hurt global economic conditions. Analysts currently project that the global economy will continue to slow for the rest of this year and into 2023, in large part a consequence of war-induced supply disruptions.

Of course, war is just one of many major concerns. Inflation has proven stickier than many economists expected. The Fed has been aggressively boosting rates, to make up for lost time.

And yet, last week’s decline in commodities prices and concomitant pullback in bond yields showed that inflation’s rise is not inexorable and there’s still a chance for the Fed to ease up on tightening in the final months of the year.

A report that consumer sentiment is getting more favorable about inflation also cheered Wall Street. The University of Michigan’s Surveys of Consumers reported last Friday that consumers expect inflation to rise at a 5.3% annualized rate as of the end of June. That expectation is down from a preliminary reading released earlier this month, which showed inflation was expected by consumers to increase at a rate of 5.4%.

Amid this mixed bag of data, investors saw enough positives last week to wade back into the market (see chart). 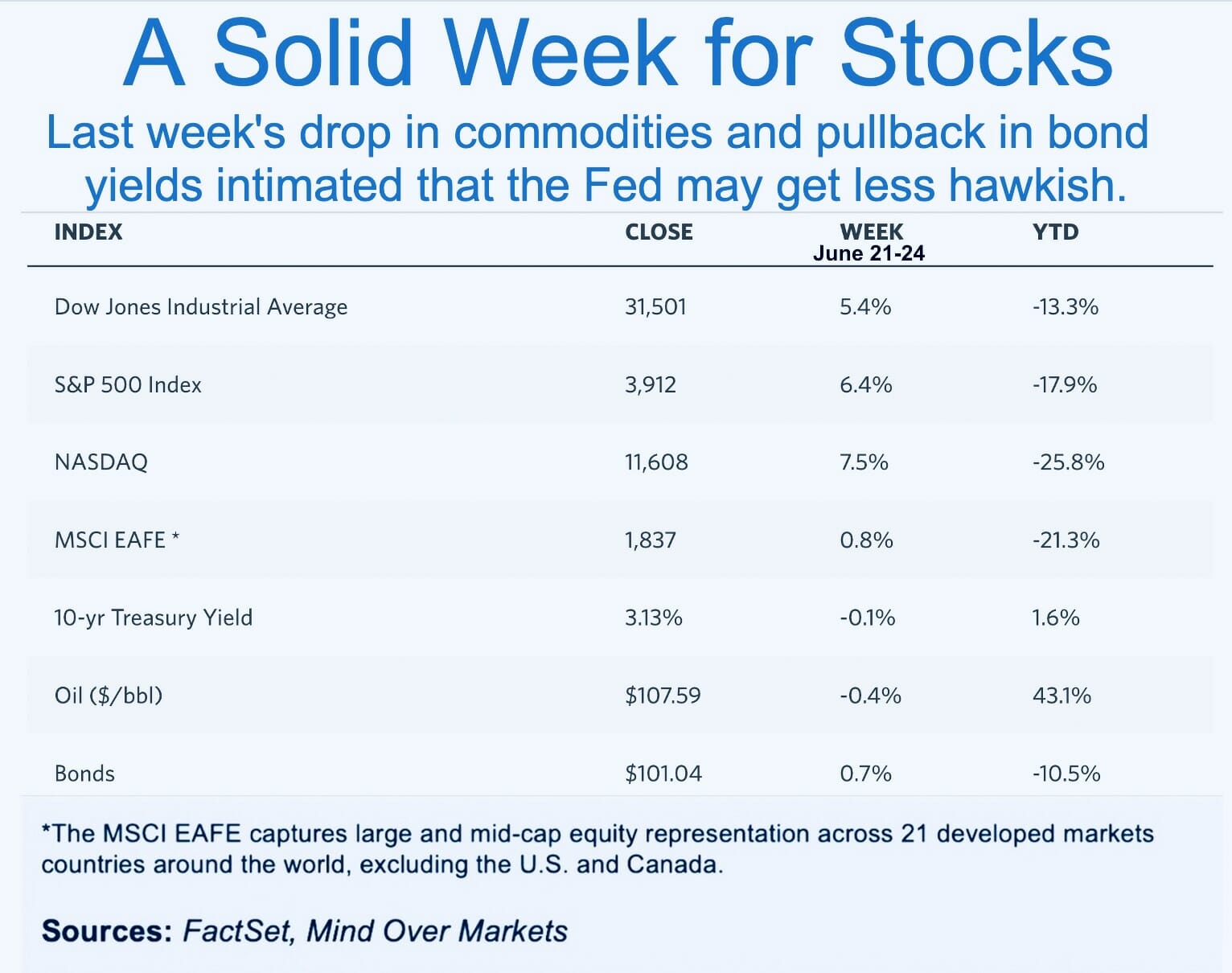 Indeed, the selloff so far this year in stocks and bonds has enhanced future growth opportunities for long-term investors.

Economic growth is slowing but the labor market remains strong and household savings are high, suggesting that a recession is not a foregone conclusion. Job openings are double the number of unemployed workers.

Corporate earnings growth is decelerating but hasn’t fallen off a cliff. According to research firm FactSet, analysts expect S&P 500 earnings to grow 10% this year and 9% in 2023 (on a year-over-year basis).

However, as the second half of 2022 gets underway, consumer demand is likely to lose steam in reaction to rising rates. Jobless claims have been slowly rising over the past two months, as businesses grow more cautious.

Sectors that are sensitive to interest rates, such as technology, housing, and automobiles, already are slowing. Mortgage applications and existing home sales have been slumping.

With crude oil prices higher by 43% year to date, energy was the only sector to post gains in the first half of 2022. Utilities and consumer staples outperformed, as investors piled into safe havens that are less vulnerable to the economic cycle.

Investors are pricing into equities an economic recession, which provides opportunities because there’s still a good chance that the economy will avoid two consecutive quarters of negative growth.

Looking for ways to generate profits, and simultaneously mitigate the risks I’ve described above? Consider the advice of my colleague, Jim Pearce.

Jim is the chief investment strategist of our flagship publication, Personal Finance. We’ve launched a premium advisory that’s an adjunct to this service, called PF Pro.

PF Pro takes Jim’s advice to the next level, for even greater gains. As Jim himself says: “If you like the profits you’re getting from Personal Finance now…you’re going to love what I’ve got in store for you next!” Click here for details.