Often ignored during bear markets and difficult geopolitical periods is the irrefutable fact that as the world readjusts to what’s left after a difficult period, new ways to do things usually emerge from the rubble. A perfect example is the baby boom and the related economic global economic expansion after World War II.

Accordingly, it is thus plausible that once the current geopolitical situation is resolved, we may enter one of those periods. And if there’s an area where we will surely see some serious adjustment, it’s energy generation.

Anyone who’s owned uranium and nuclear power related stocks over the last year has to be scratching their heads as why the nuclear energy sector remains near the bottom of the investing heap, even as the world careens toward what some are calling a catastrophic energy crisis.

Yet, as I discuss below, the situation may be changing.

The Heat Is On

I live in Texas and I was fortunate enough to not have experienced the catastrophic loss of power that many in the state went through in the winter of 2021, when the electrical power grid came close to crashing. But I know many who did and it wasn’t pleasant to experience or to witness.

Along with a mechanical and weather related failure of the wind and solar components of the grid, part of the reason for the dire situation that occurred was the going off line of a major nuclear facility in the Houston area just before the weather turned sour.

This summer, with temperatures above 100 degrees Fahrenheit on a regular basis (in the month of June alone), and with forecasts for the same or worse into the month of July, not a day goes by when I wonder if the same energy crisis can’t happen again.

Of course, the reasons behind the strain on global electric grids is highly complex, with causes ranging from the push to a conversion to green energy to geopolitics (think Ukraine). Moreover, what many fail to consider is the fact that infrastructure ages and the quest for natural resources has its ups and downs.

Still, in a modern world, we need power. And electricity is the most important form of such power since it’s the energy source that runs everything, especially as electric vehicle sales steadily increase.

Sure, solar and wind can help. And oil and natural gas aren’t going anywhere, except they are getting harder to find or to extract due to red tape. But nuclear power looks set to have its day, and not just in terms of uranium mining.

That’s because the International Energy Agency (IEA) estimates that 63% of the nuclear plants in the world are over 30 years old, with many nearing the point at which they will need significant upgrades or get shut down.

What that means is that companies at all stages of the nuclear power spectrum, from design and engineering to fuel transport and especially uranium mining, could be a significant sector for investing in the future.

All of which brings me to a recent analysis from the IEA calling for an increase in the use of nuclear power. The IEA is a Paris based group whose membership is mostly composed of G-20 and aspiring G-20 countries. Its stated goal is that of “shaping a secure and sustainable energy future for all.” Interestingly, missing from the group are Russia, Saudi Arabia, Iran, and OPEC-type countries.

Specifically, according to Oil Price.com, the IEA is starting to beat the drums for nuclear energy as a way to reach the net zero carbon future by doubling global nuclear capacity over the next 30 years.

As a result, those of us who have been long suffering investors in nuclear power may get our day in the sun.

The Wide World of Uranium Stocks

The world of uranium stocks is full of mining companies which toil in the penny stocks universe. I prefer to avoid them. There are also indirect ways to invest such as through companies which invest in properties and pay dividends based on royalties. That can also be unreliable.

Amid the clutter, however, there are two huge mining concerns, BHP Group (NYSE: BHP) and Rio Tinto Group (NYSE: RIO) whose property portfolios include uranium properties. 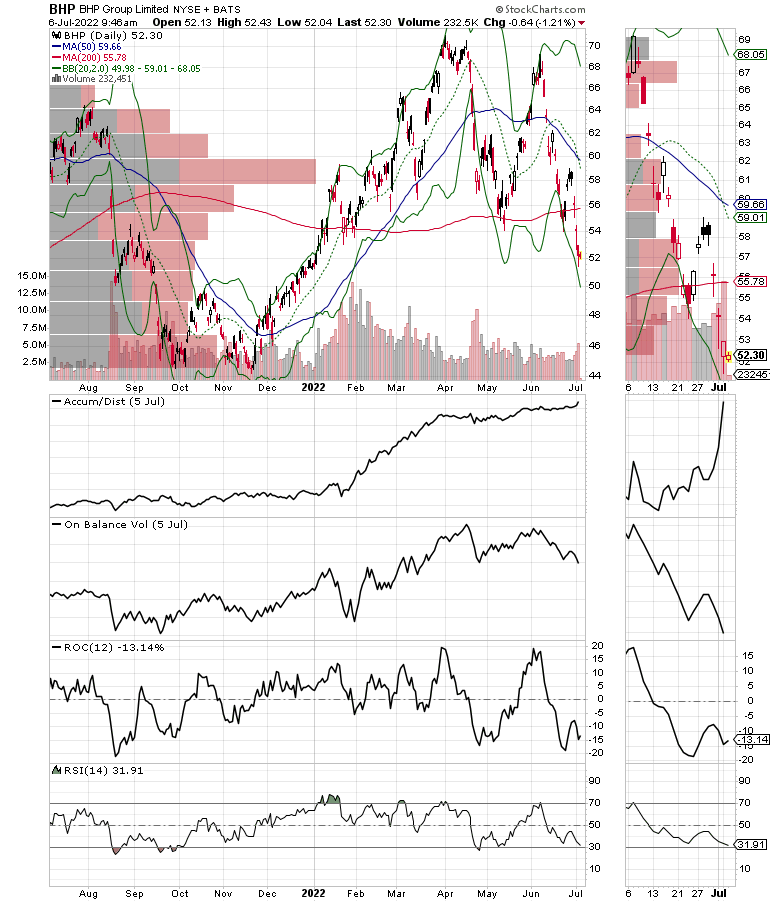 You can see by the price chart for BHP that unless you’re adept at short to intermediate term trading, the road to profits in the sector can be challenging. Indeed, aside from its uranium properties, BHP has been struggling because of rising expectations about a potential slowing in the global economy and how that dynamic may interfere with its other ores, especially copper.

In other words, even if the uranium business is humming, difficulties in other parts of the company could bring the stock price down.

Getting it All in One Place

Consequently, given the fact that uranium can be a tricky sector, it makes sense to consider using an exchange-traded fund (ETF), such as the Global X Uranium ETF (URA), which offers a diversified portfolio based not just on uranium miners but also on companies whose products are involved in exploration, refining, materials and equipment used in refining as well as the nuclear industry. These companies aren’t necessarily involved in other sectors to the same degree as companies along the lines of BHP. 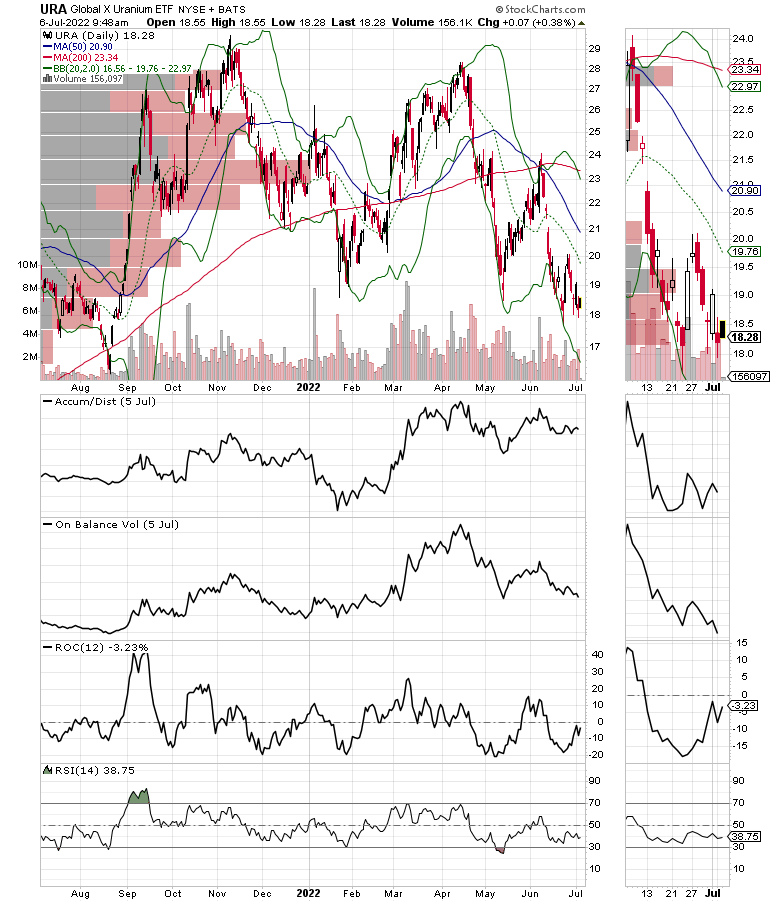 The ETF is suffering from a lack of buyers at the moment, which can be a benefit for patient investors with a long-term time frame.

There is some price support near $18 but the really important price area is $24. That’s because that’s where the largest Volume by Price (the VBP, which is the big bar on the left side of the chart is located). VBP is a great indicator for pinpointing important price points on price charts.

When a stock rises above a large VBP price, such as the one at $24 for URA, it means that the buyers have overtaken the sellers at that price point and that the odds favor higher prices in the future.

If you’re looking for a short-term trade, use the Relative Strength Indicator (RSI) to pinpoint whether URA is overbought or oversold. With RSI recently having hit the 30 area, this ETF is now oversold.

Uranium mining and nuclear power related stocks could become increasingly prominent in the next few months as the Ukraine war-induced energy crisis develops. This sector could easily catch on fire if Russia cuts off oil and natural gas supplies from Europe this winter.

As a result, having a small position in URA now and adding to it over time may be just what the doctor ordered.