The Real Story in the Housing Market

There’s always a bull market…somewhere. Sometimes you have to drive around to find it.

If you read the news regarding the housing market, it’s hard not to be bearish. Just recently, homebuilder sentiment hit a new low. A few days before, data emerged suggesting that home prices may have topped out. And to make matters worse, mortgage demand is reportedly falling as rates rise just as existing home sales fell for the fifth straight month.

If conditions are so bad, why are homebuilders still building houses? And why do price charts suggest that their stocks have made a credible bottom?

Last Saturday, in the midst of yet another 100 degrees plus day in the Dallas Fort Worth (DFW) metroplex, I decided to go out and kick some tires (figuratively speaking, of course) to have a look at the status of the house building boom in these here parts.

What I saw was eye opening, as well as contrary to what the daily negative data on housing indicates.

Watch This Video: Has The Stock Market Stabilized?

In fact, in contrast to the dark forecasts for decreases in home sales due to rising mortgage rates, news about rising inventories, and the generally accepted potential for a recession, what I saw was a boom town scenario.

The Lay of the Land

Let’s put this in perspective. According to a recent CNBC survey, Texas is the fourth most stable housing market in the U.S.. behind Utah, Washington, and Florida. It’s also the most affordable of the top 10 based on the price appreciation data. Moreover, compared to other markets, its housing starts rate of 8.9/1000 population hovers at the average of the top 10 (at 8.72). I’ll have more on housing starts below.

Foreclosure rates in Texas are at 44% of the average for the top 10 markets, although underwater mortgages are above the average for this group. Interestingly, realtors in the area are telling customers not to expect bidding wars and that even though the odds of selling their homes for a good price remain above average, it could take much longer now than it did even a few months ago. But there is no sense of panic.

Here are more interesting findings based on the most recent data from the U.S. Census Bureau, measuring population shifts in 2020-2021.

All of the states in the Top 10 (see above) experienced population growth, with Idaho showing the fastest rate (2.9%) and Washington growing the least (0.3%). Florida, Utah, Texas, and Arizona, sunbelt states which grab population shift headlines on a regular basis, grew at 1%, 1.7%, 1.1%, and 1.4% respectively. These percentages are deceiving, however, since Florida and Texas have much larger baseline populations.

Perhaps the most striking observation is that although the state of Washington is number two on the list of most stable housing markets, its population only grew 0.3% during the measured period. I see a lot of Washington state license plates in DFW.

Census Data and Boots on the Ground Observations

I expect that more recent data would show further growth in the dynamic. Now here is what I saw when I drove to the northernmost area of the Metroplex last Saturday:

The bottom line is that inflation, recessions, a decline in home building, and the major issues that are gathering the headlines were not apparent here.

With headline statistics showing a slowing in housing, it’s important to dig into the actual numbers. And it looks as if the reason for the strength in homebuilders is the regional distribution of where they are working.

For example, the June housing starts headline was that housing starts dropped by 2% to an annualized rate of 1.559 million, the lowest level since September 2021. The big decline was due to single family home starts falling to 982,000.

But a deeper look at the numbers shows a different picture. In fact, even though the South’s housing starts fell, the actual number of new starts was 825,000. Meanwhile, the Northeast had a mere 156,000 new starts while the West delivered 363,000 new starts. The Midwest clocked in at 215,000.

So, what’s really going on, even though numbers suggest there is a mortgage related slowing, is that the South accounts for 53% of the new housing starts. Moreover, the regions with rising percentages account for only 33% of the new starts.

In fact, despite the reported fall in existing home sales for the month of June, the details again show that 44% of the sales occurred in the South.

In other words, the regional housing starts statistics which favor the South roughly correspond to the data pertaining to the stable markets above, as well as to regional sales data. The population shift to the Southern U.S. is real, and ongoing.

I can drive around DFW all day long and describe what I see as a bullish picture. But none of that matters if the homebuilder stocks are not responding.

When in doubt, aside from what you are seeing on the ground, look at what the market is doing, especially in response to news. And with the housing sector, a great snapshot of the market’s opinion is via the price action of the SPDR Homebuilder ETF (XHB). 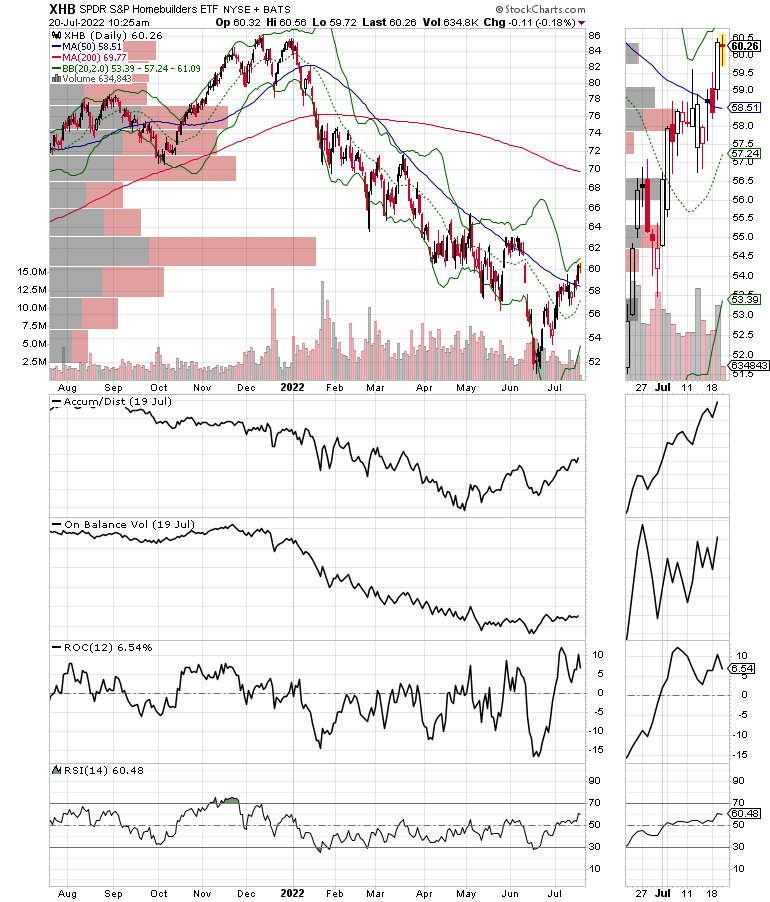 And here is what is most salient about this area of the market, at least at the moment:

It’s Still All About Supply

Success in investing always comes down to knowing the status of supply and demand.

In this case, the headlines are not indicative of what’s really happening on the ground. Yes, rising mortgages are causing a slowing in home sales, both new homes and existing homes.

But a deep dive into the actual data shows that even though rising mortgages are having a negative effect on sales, the overriding macro that is driving the market is that demand is still outstripping supply of housing on a regional basis.

Indeed, when you look at the regional housing starts data, it shows that even though the South may be slowing along with the rest of the country, the demand for housing from the high numbers of people relocating still favors homebuilders.

And it’s that macro, which shows no sign of slowing, as my Saturday afternoon drive suggests, that may be enough to keep homebuilders in profit mode long enough for the Federal Reserve to reverse its rate hiking cycle. Because in the end, it’s all about supply. And supply, at least in the areas where people are moving to, regardless of what aggregate supply is doing nationally, is still favorable for builders.

Can this all go wrong? Yes, which is why I’ll be digging into the data carefully on a regular basis and taking that drive north a bit more often. If I see that houses are sitting empty, or that building has slowed, I will certainly change my tune.

At this point, I’m not betting on any of that. That’s because sometimes a drive around the block combined with a deep dive into the numbers beyond the headlines can make a difference in how you look at the world and where you put your money.