Cashing In on Cheap Beer

I worked construction as a laborer the summer after my senior year of high school before heading to college. Eight hours a day, I hauled brick and mortar in the blazing hot sun.

One of the bricklayers I worked with, Tommy, was often teased by his colleagues for wearing raggedy clothes and driving a rusted-out junker of a car. He didn’t care. The way he saw it, the clothes would end up getting ruined anyway and the car was nothing more than a means of getting to and from work.

But when it came to beer, Tommy refused to drink anything but Heineken. Back then, Heineken was regarded as an expensive import that signified wealth and fine taste. The sight of Tommy swilling a Heineken each day at the end of his shift elicited chuckles from all of us.

One day, I asked Tommy why his parsimonious ways did not extend to his choice of beverages. He gave me a cold stare and replied, “Son, life is too short to drink cheap beer.”

Apparently, not everyone shares that sentiment. According to the New York Post (referencing an article by the Wall Street Journal), “In the four weeks that ended on July 2, retail sales of economy beer ticked up by 5.4% compared to the same period last year.”

The article went on to note, “By comparison, retail sales of economy beer dropped last year by 10.9%.” It is worth noting that a year ago, inflation was not yet a concern and consumers had lots of money to spend.

Now, inflation is raging out of control. Last month, the trailing 12-month growth rate for the Consumer Price Index for All Urban Consumers (CPI-U) was 9.1% compared to 5.4% one year prior.

At the same time, the Personal Savings Rate in the United States is at its lowest level in thirteen years. In short, prices are rising while consumers are low on cash.

The drop in demand for craft beer has been especially tough on The Boston Beer Company (NYSE: SAM), maker of Sam Adams Boston Lager. In April 2021, SAM hit an all-time high above $1,300. Last month, it bottomed out below $300. 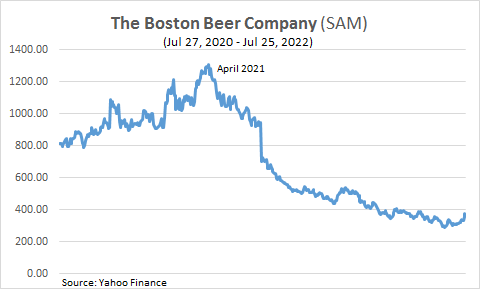 Not all of that decline is due to the shift towards cheap beer. Last summer, Boston Beer incorrectly anticipated that hard seltzer sales would remain strong. Instead, the company had to dump thousands of cases of its Truly brand of hard seltzer at a loss after consumers switched back to regular beer.

That problem persists to this day. In fact, the company appears to be doubling down on its hard seltzer business as evinced by this quote from its Chairman and Founder, Jim Koch, in the press release accompanying Boston Beer’s fiscal 2022 Q2 results:

Over the last three years we experienced unprecedented growth in the hard seltzer category largely driven by the success of our Truly brand. I continue to be optimistic about the long-term growth outlook for Boston Beer’s diversified beverage portfolio, despite the greater than expected continuing decline in demand in the hard seltzer category that we have seen year to date.

Sometimes, it pays to be stubborn if you’re certain that a shift in consumer sentiment is only temporary. But in this case, I think Koch may be engaging in wishful thinking.

It appears that the options market disagrees with me. Last week while SAM was trading at $373, the call option that expires on December 16 at the $380 strike price could be bought for $40 (call options increase in value when the price of the underlying security goes up).

For that trade to be profitable, SAM would have to rise above $420 before the end of this year. That works out to a 12% rise in less than five months.

Apparently, a lot of options traders share Tommy’s sentiment. In their case, life is too short to not drink hard seltzer.

Even though I have a high tolerance for risk, this is one trade that I would avoid. From a technical perspective, SAM is now overbought and will bump up against firm resistance near $400.

I also wouldn’t buy a put option on SAM (put options increase in value when the price of the underlying security goes down). They are as equally expensive as the call options.

A better trade might be a “short straddle,” which entails selling both a call and put option at the same price and same expiration date. Last week, that trade would have generated $8000 of options premium for a single contract.

In this case, I would be betting on SAM to go no lower than $290 and no higher than $450 by the end of this year. If stays within that range then this trade would be profitable.

If I am wrong and SAM falls or rises by more than that, I would lose money on this trade. The loss on either the put or call option would exceed the options premiums I received for taking that risk.

I never thought that I might one day risk my hard-earned money on a trade inspired by Tommy the bricklayer. On the other hand, Tommy probably never thought that the inquisitive lad fetching his brick and mortar 45 years ago would go on to become a stock market analyst.

Consumers are sending some very loud signals to the stock market. Last week, Walmart reduced its profit guidance for this year. The company noted that rising inflation is forcing its customers to spend more money on low-margin food products and less money on higher-margin merchandise.

That behavior is consistent with the shift towards cheaper beer. When money gets tight, consumers are quick to compromise.

The good news is that there are ways to profit from sudden shifts in consumer sentiment. And right now, there is a surge in demand for legal marijuana that is still in its early stages.

Indeed, marijuana represents a powerful investment megatrend. As legalization of marijuana gathers steam around the world, sales of weed are skyrocketing and investors are getting rich. But pot stocks can be risky; you need to be selective.