Investing in the Most Important Resource on the Planet

Humans require food, water, air, and shelter to survive. But societies around the world face a growing global water crisis, spawned by a wide variety of factors, including pollution, overpopulation, and poor agricultural practices.

It may seem ironic, since over 70% of the earth’s surface is covered by water. We live on a blue planet. When I was younger and heard that the world was running out of fresh water, it didn’t ring entirely true to me.

After all, unlike fossil fuels, which are consumed and then converted into waste products, water remains water. It can be cleaned up and reused. We don’t “consume” water in the same way we consume fossil fuels. We use it and recycle it.

As I grew older, I realized the flaws in my thinking. Yes, there’s plenty of water in the world. But freshwater supplies are declining, and purifying brackish water, seawater, or polluted water requires enormous inputs of energy. Such purification is also expensive.

Read This Story: Water: The Most Precious Commodity of All

Combined with low rainfall in the West, it shouldn’t be surprising that landscape irrigation is the reason this region has some of the highest per capita residential water use in the country. These also are the areas where irrigation for agriculture (and for golf courses) is exceedingly higher, and in some cases rapidly depleting the nation’s aquifers.

It is possible to invest in an index fund that covers the entire water sector, but such an investment will include growth stocks, foreign stocks, and companies from riskier sectors. In fact, 47% of the holdings in the S&P Global Water Index (ISPGTAQUA) are foreign companies, and less than 50% are utilities.

For income seekers, this means higher risks than for a conventional U.S. water utility, but also slightly higher yields (2.2%) than the average U.S. water utility. Even though five of the Top 10 index holdings are classified as utilities, the only pure water utilities are American Water Works (NYSE: AWK), UK-based United Utilities (OTC: UUGRY), and UK-based Severn Trent (OTC: STRNY).

Notably, the S&P Global Water Index has significantly outperformed the S&P 500 since its inception on 11/19/2001. 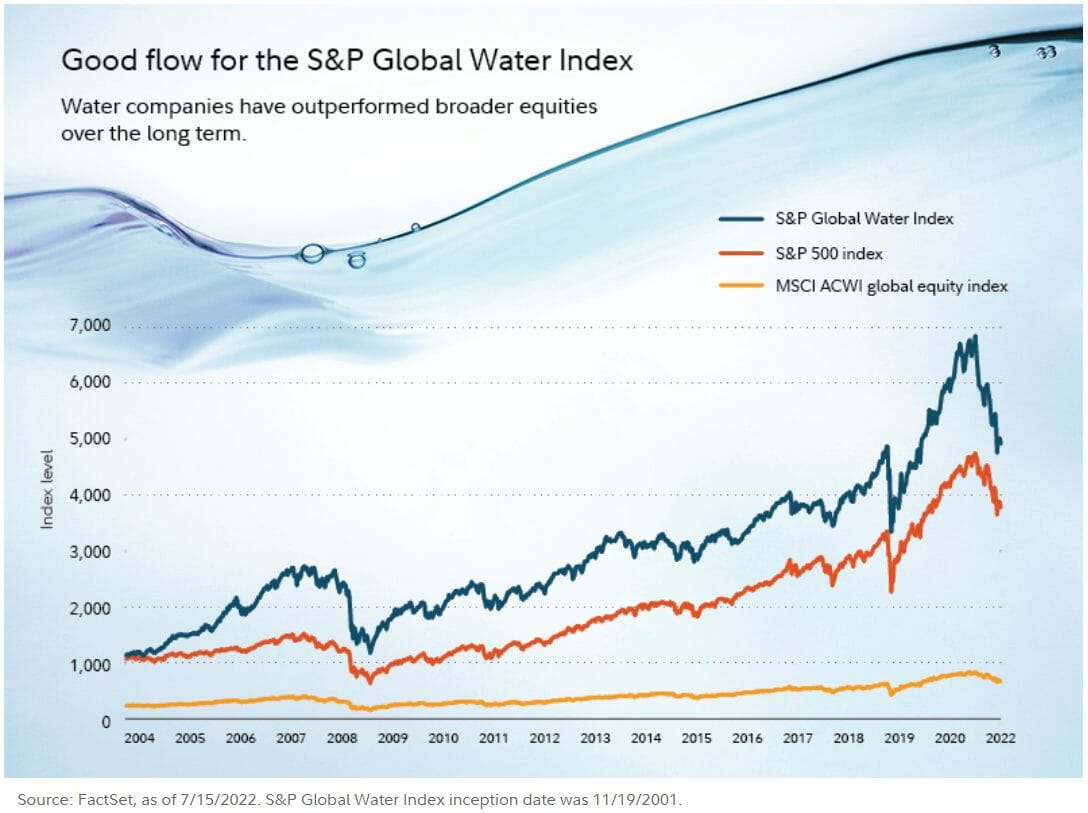 It’s becoming harder to invest in a pure water utility. Much like the declining supplies of fresh water, there is a declining pool of publicly traded utilities providing that water.

Read This Story: Your #1 Play on The World’s Most Precious Commodity

Over the past few years, through a combination of buyouts, mergers, and water utilities expanding into other utility services, the number of pure water utilities has dwindled. Thus, it probably makes more sense to invest in a water index, or to spread your bets around the sector.

There will continue to be huge opportunities for companies that can economically produce fresh water, for companies that produce and own water infrastructure, and for water utilities. Don’t overlook this sector that promises to become increasingly important in the future.