At the forefront of the stock market’s list of concerns are the actions of the Federal Reserve and how higher interest rates will affect the economy. Certainly, that is justified. But as I noted in this recent article, the effects of the Fed’s rate hikes should not be a surprise, because they’ve been slowly developing for months.

Yet, a little-known weather phenomenon with a dramatic history could lead to an explosive second half of hurricane season, which began on June 1 and extends through November 30. Ironically, hurricane season has been very quiet to this point, although forecasts called for an “above average” season.

And while rising interest rates can lead to economic pain, hurricanes are terrible natural phenomena which often deliver long-lasting repercussions throughout people’s lives, the environment, and the economy.

As the season progresses, the odds increase of a major storm occurring whose devastating effects could alter investing patterns for shares of key sectors and companies.

There is a natural occurrence in the tropics known as the Loop Current, through which tropical seawater flows into the Gulf of Mexico. Because Loop Current water is warmer than normal Gulf water, it both warms the Gulf and acts like a furnace which warms the air when it evaporates. The deeper the Loop Current reaches, the higher its furnace potential, and thus its potential ability to enhance hurricane strength.

To put that in perspective, the Loop Current numbers for 2021’s Hurricane Ida were a temperature of 86 degrees F at the surface and similar heat as far down as 500 plus feet.

Hurricane Katrina in 2005, which devastated New Orleans, is another instance of how the Loop Current can increase a hurricane’s strength and increase its devastation. In May 2022, the Loop Current had a surface temperature of 78 degrees to approximately 330 feet. It could get hotter and deeper as the summer progresses.

This year, the Loop Current is traveling further north in the Gulf of Mexico than in prior years and it’s eerily similar to the 2005 edition. In addition, this influx of warm water is entering a Gulf region which is already warmer than average, setting up the potential for even stronger hurricanes once the season reaches its prime time.

To date, we’ve had a very quiet season. But it’s not over by any means, as demonstrated by last year’s most dramatic storm, Hurricane Ida. As the summer heats up, so do Gulf waters, and so do the odds of major storms occurring.

This year’s record heat could mean big storms in the latter part of the season, which is just about to get under way in August with an average peak in September. Ida hit the Gulf Coast of the U.S. on August 29, on the anniversary of another historic hurricane from 2005, Katrina. Their occurrence closely correlates with the increase in storm and hurricane activity depicted on the above chart.

Ida flooded New Orleans, plunged the city into darkness and destroyed as many as 40% of the homes in part of the region. And although Ida’s damage was not quite as dramatic as Katrina’s, as it moved up the U.S. Northeast coast, it caused massive flooding and by the time it was over, 53 deaths.

That storm damage accounted for billions of dollars in losses, but also led to billions in rebuilding.

Several sectors are affected by storms. Let’s focus on lumber and energy.

The price of lumber (Lumber) has certainly been slumping of late. This is due to the Federal Reserve’s interest rate increases, leading to higher mortgage prices and a subsequent slowing in the housing market.

But there is a difference in the price of lumber and the performance of the stocks of the lumber producers, whose sales often rise in response to increased demand after hurricane damage. 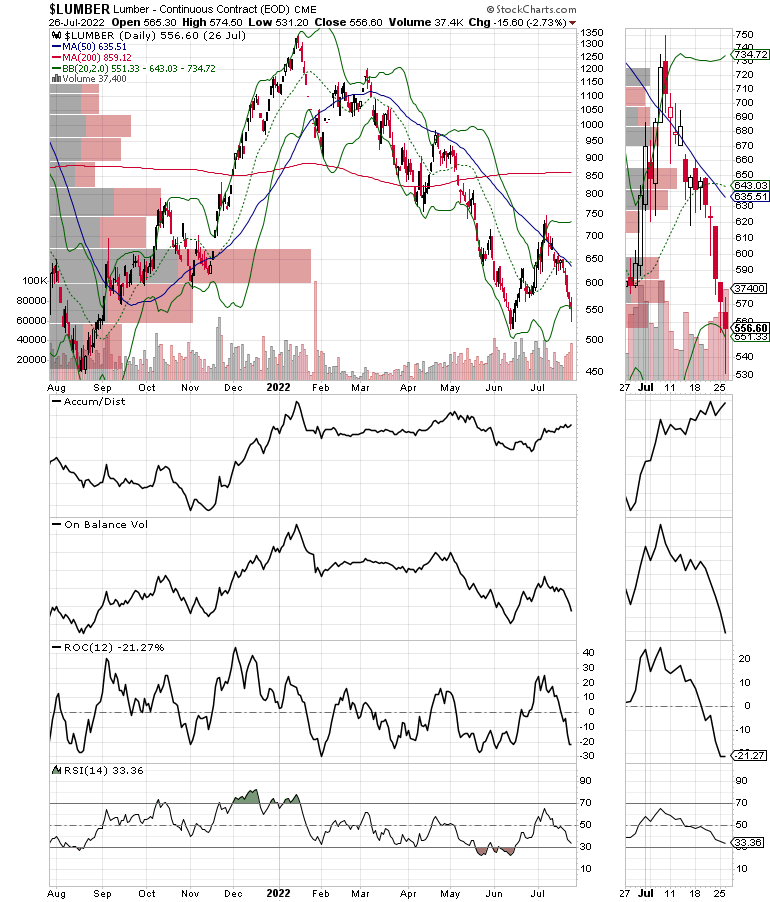 Take shares of lumber producer Weyerhaeuser Inc. (NYSE: WY). What separates WY from the rest of the lumber sector is that it’s structured as a real estate investment trust (REIT), which controls 14.1 million acres of timber and related production facilities. Thus, aside from the supply and demand issues related to lumber, because it is a REIT, WY is also very interest rate sensitive. 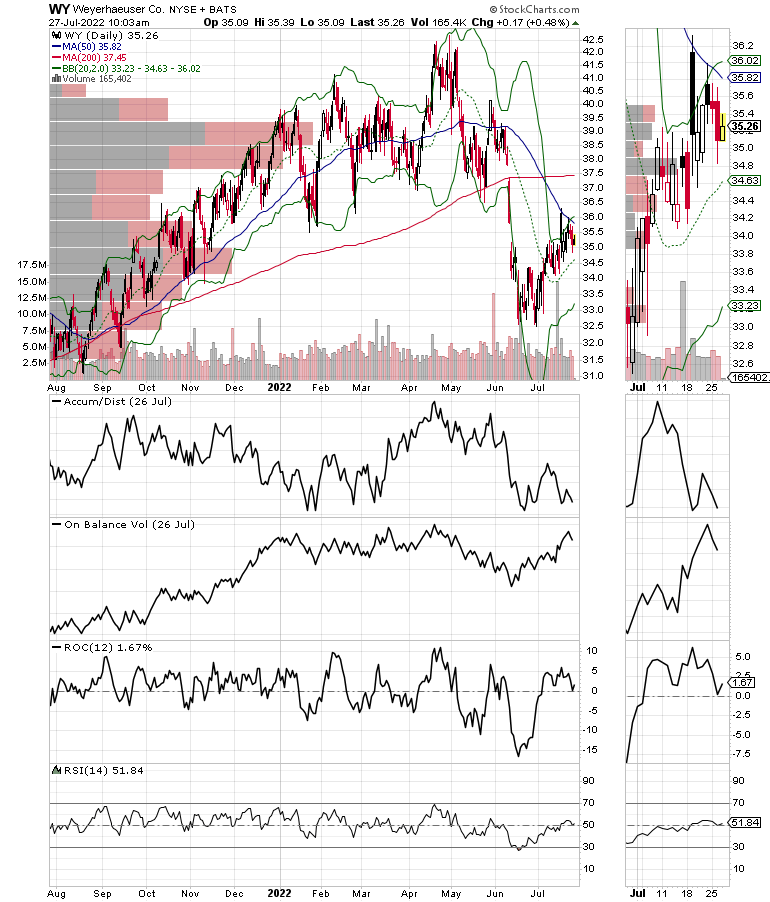 As the Federal Reserve began to trumpet its interest rates increases in December 2021 and indeed followed through early in 2022, shares of Weyerhaeuser declined due to decreased demand from homebuilders who began to experience a slowing of business also related to higher interest rates.

But a look at the price chart for earlier in 2021 shows that WY shares rallied beginning in August, just as Hurricane Ida hit New Orleans. Note the correlation between the price trend in WY to that of the chart for hurricane and storm activity.

This year, WY has again bottomed out and is starting to attract some money. This is evident in the On Balance Volume (OBV) indicator’s rise. Curiously, the Accumulation Distribution Indicator (ADI), which is an indication of what short sellers are doing, is still bottoming out, as short sellers are not convinced that lumber stocks can survive rising interest rates.

If, however, higher interest rates push the U.S. economy into recession, especially if hurricane season heats up, shares of WY could be boosted by this dual effect.

The energy sector has been volatile in 2022. But the effects of hurricane season are often positive for oil and natural gas stocks, especially those with connections to offshore supplies in the Gulf of Mexico. 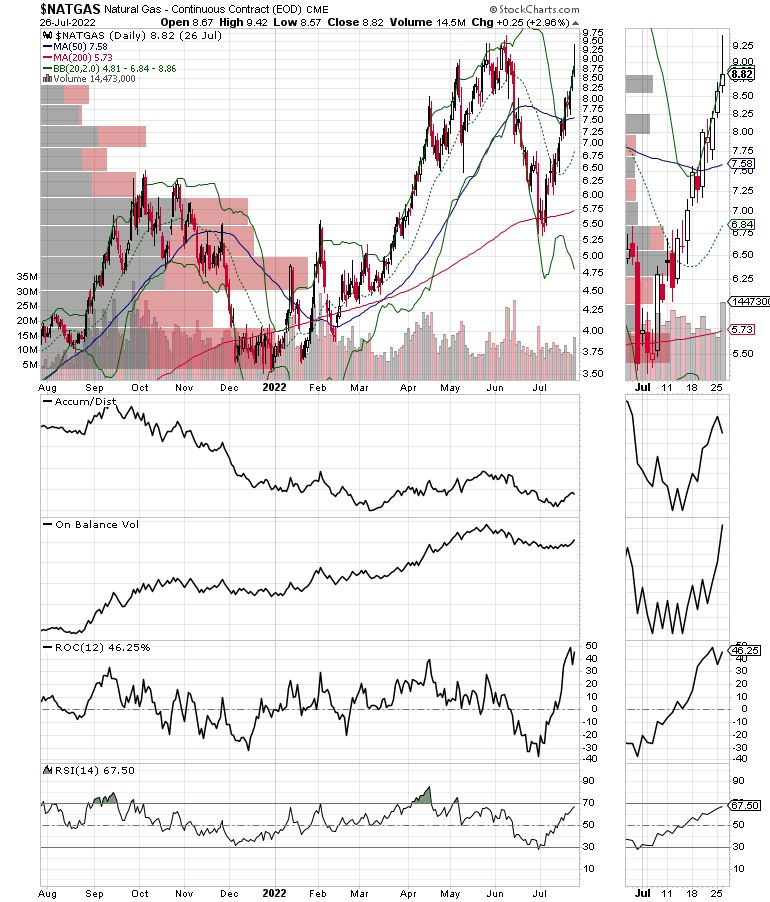 This year, the situation has been exaggerated by the war in Ukraine and the subsequent reduction of natural gas supplies to Europe by Russia. This particular event has led to a rapid increase in the price of U.S. Natural Gas (NATGAS) over the last few weeks. 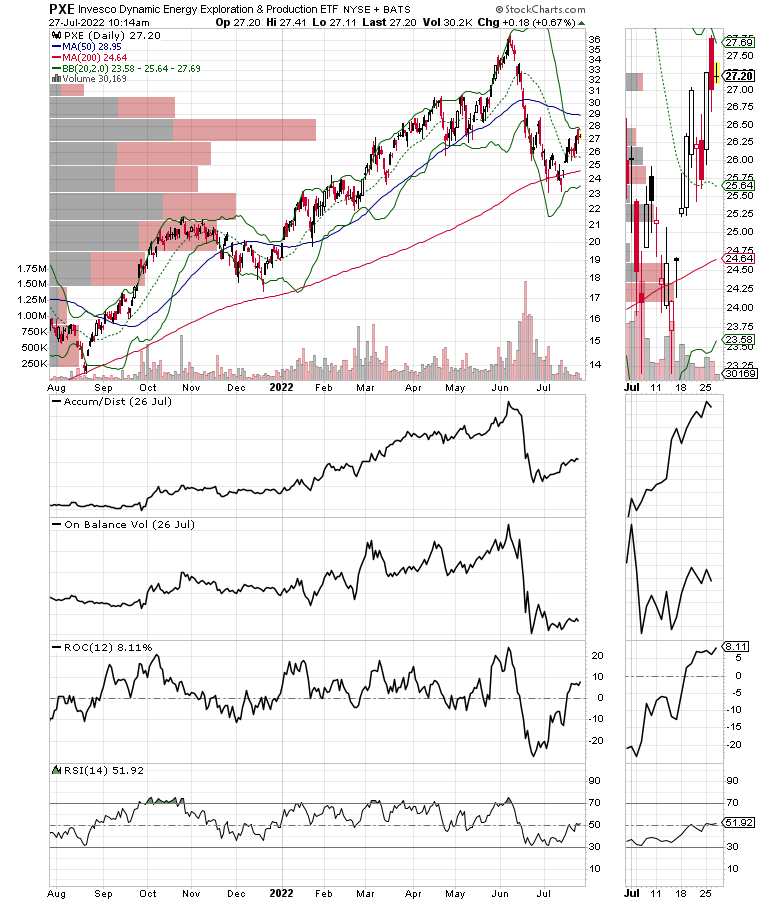 Because of the inherent volatility of natural gas stocks, owning a diversified portfolio of them such as in the Invesco Dynamic Energy Exploration and Production Portfolio (PXE) makes sense.

Note that in contrast to the action in WY, and despite a sizeable pullback in July, PXE has been in a bullish trend throughout 2022. Moreover, as the European natural gas situation has worsened, PXE has resumed its uptrend after finding support near its 200-day moving average.

Given the fact that natural gas prices are already high, if there is a major hurricane in the next few months which further hampers natural gas supply, PXE could well return to its old highs.

Hurricanes are terrible events. Thus, it would be a terrific development if the 2022 hurricane season turned out to be a dud.

At the same time, from an investment standpoint, it’s reasonable to be prepared. Two ways to do so include investing in lumber and natural gas and energy stocks on a seasonal basis.

Editor’s Note: Many investors are sitting on the sidelines, waiting for the next shoe to drop. However, despite current market turmoil, you don’t have to be a passive investor right now.

Cryptocurrency offerings can be risky and many coins have endured a rough patch lately. But you can still make money from crypto; the key is finding the right plays. Our colleague Jimmy Butts has done the homework for you.

As chief investment strategist of Capital Wealth Letter, Jimmy has pinpointed the three best ways for investors to cash in on crypto’s coming resurgence. Click here to learn more.