The REIT Way to Beat Inflation and Higher Rates

The monetary oracles have spoken. The Federal Reserve on Wednesday hiked interest rates by 0.75%, matching the size of the Fed’s last move in June, which was its largest single-meeting rate increase since 1994.

Inflation and rates continue to rise. That’s why you should consider real estate investment trusts (REITs). Below, I explain why. I also pinpoint a REIT that’s in the health care sector, putting it in the right place, at the right time.

Thanks to their tax-advantaged structure, REITs are required to distribute a minimum of 90% of their income to investors. As a result, many investors treat them as bond-like investments.

When interest rates go up and inflation is on the ascendancy, Treasury bonds and other more conventional fixed-income securities become more attractive. But that thinking actually overlooks two key features that make REITs especially appealing when rates and inflation are rising.

The first is that REITs have the ability to increase rents along with rates and inflation. In the case of residential REITs, leases are typically renegotiated on an annual basis given the REITs’ ample leeway to grow cash flows in tandem with the economic environment.

While many commercial or industrial leases are negotiated on five- or even 10-year terms, many include provisions for stepping up rental rates based on a benchmark such as the London Interbank Offered Rate or the 10-year Treasury.

So, unlike a bond, REITs have the ability to change their income streams to account for higher rates. And just as bonds have a principal value, REITs have what amounts to a net asset value or the price their real estate properties would fetch in the open market.

When inflation and interest rates are ticking up, hard assets come into higher demand. Accordingly, real estate has long been a traditional inflation hedge, since property values tend to appreciate in that type of environment.

But if you actually purchase a piece of property, you’re locking up a substantial sum of money for an extended period of time and reducing your ability to diversify your investments.

REITs, on the other hand, allow you to diversify your real estate investments across a wide variety of both geographies and types of properties at a relatively low cost. Over the long haul, while REIT share prices are more volatile than the values of actual real estate, their return profiles are virtually identical.

The upshot: REITs make much more sense for most investors than a direct investment in property.

Rx for rising rates and inflation…

One REIT that I find particularly attractive is Medical Properties Trust (NYSE: MPW).

Based in Birmingham, Alabama, MPW buys health care facilities and leases them back to the former owners. This is an increasingly popular way for medical providers, and especially hospitals, to fund essentials such as technology and staff upgrades, while lowering their overall operating costs. In some instances, MPW actually builds the facilities and recovers its investment through long-term leases.

Founded in 2003, MPW has grown to become one of the world’s largest owners of hospitals, with approximately 431 facilities and 43,000 licensed beds in nine countries and across four continents. MPW’s financing model facilitates recapitalizations and allows operators of hospitals to unlock the value of their real estate assets.

With a market capitalization of $10 billion, MPW is on the higher range of mid-cap status. As a REIT, MPW pays out at least 90% of its earnings to shareholders to avoid taxes. At the current rate, MPW shares yield 6.9% percent, significantly more than the 6% of the typical health care REIT and the 4% of regular REITs.

I don’t see MPW’s payout as being at risk. In fact, it should rise from here due to continued acquisitions.

Many of the REIT’s leaseback deals generate returns of around 10%, are “triple-net” leases (the lessor pays for maintenance and insurance) and they allow for annual inflation increases.

In general, health care REITs are perceived as being riskier because of their lack of diversification and outlook being tied to the financial health of the medical providers.

However, any changes that affect the profitability of the providers are not likely to have a material impact on health care REITS, unless the problems are so severe that they cause a default. MPW’s clients are well-established hospital operators, many of them with award-winning facilities.

What’s more, only about 1% of U.S. hospitals close in any one year. Most hospitals have been around for decades and have entrenched ties to their communities, making closure or relocation unlikely.

MPW also does not fund or own any medical office buildings, outpatient or assisted living facilities, which have traditionally been the focus of health care REITs and are more likely to suffer from economic downturns.

An added benefit for investors: as a REIT, a substantial portion of MPW’s dividend is not taxed because it’s considered a return of capital to investors.

Finally, largely due to America’s aging population, health care spending in the country is expected to continue rising (see chart). 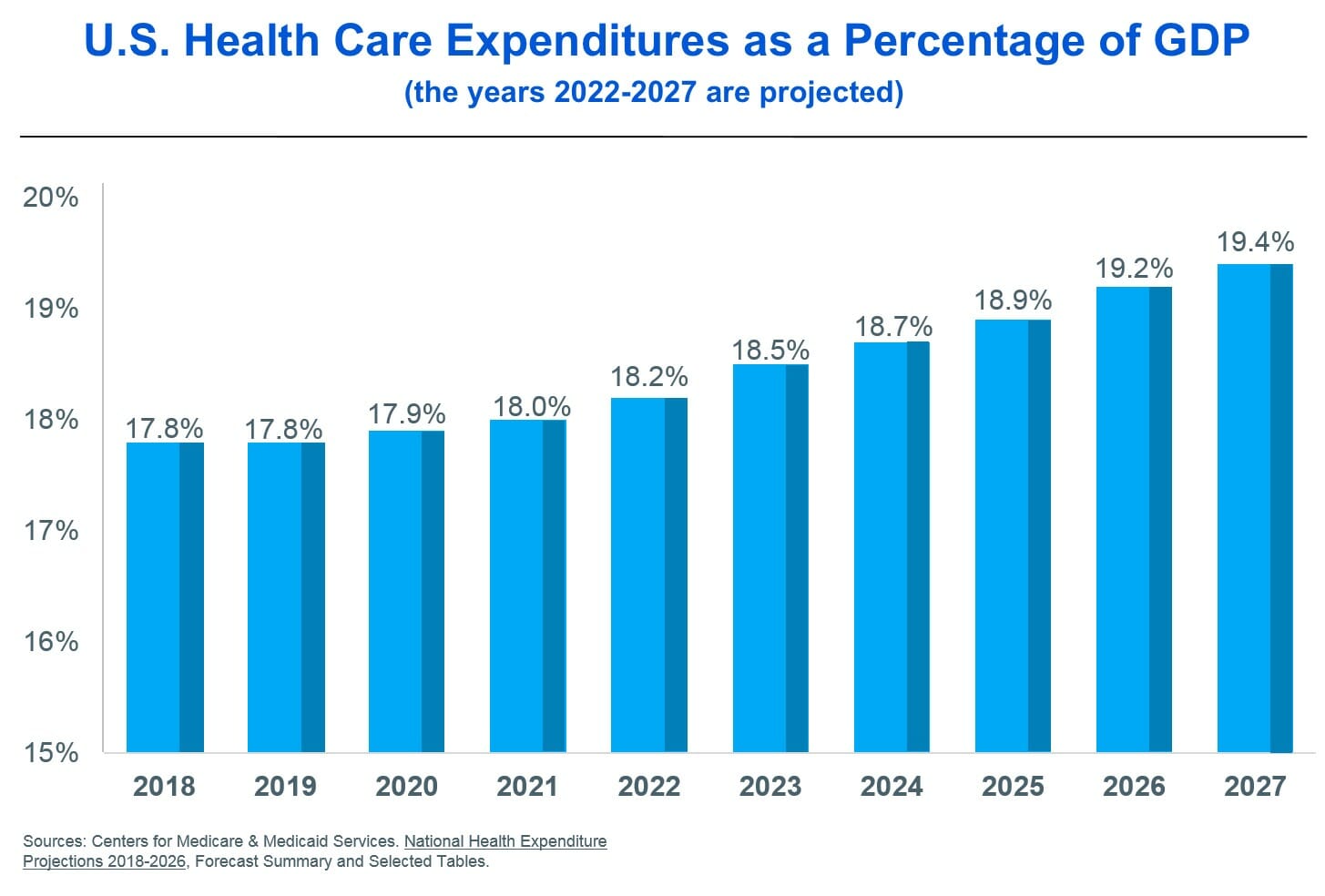 Few trends are more powerful than global demand for health services. Populations around the world are aging and middle classes in emerging markets are getting more affluent. Global expenditures on doctors, hospitals and pharmaceuticals are all going in one direction: up.

MPW offers all of the interest rate and inflation protection of a more conventional REIT, while also leveraging the upside potential of shifting American demographics.

PS: Knowing your risk tolerance will help you decide which investment strategy is right for you. For example, if you have a low risk tolerance, you may want to emphasize safe haven investments even though your time horizon indicates you could be more aggressive. For our special report on safe, high-income stocks, click here.