Don’t get too comfortable in your beach hammock. We’ve received a flurry of crucial reports in recent days, on monetary policy, the economy, employment, and housing. Tomorrow, we’ll get big news on inflation.

Taken together, the data this week could determine the direction of financial markets for the rest of the summer. Investors are understandably uneasy. So where do we stand?

Let’s start with the most powerful people in Washington. No, not the politicians in the White House. I’m referring to the monetary mandarins in the Marriner S. Eccles Federal Reserve Board Building.

The Federal Reserve on Wednesday hiked interest rates by 0.75%, matching the size of the Fed’s last move in June, which was its largest single-meeting rate increase since 1994.

Fed Chair Jerome Powell said at his press conference: “I do not think the U.S. is currently in a recession. There are too many areas of the economy that are performing too well.”

Wednesday’s 0.75% move by the Fed was in line with analyst expectations, which means the hike already was priced into the markets, which is good news for equity investors moving forward. Wall Street is betting that, in terms of hiking rates, we’re nearing the peak and September may bring a dovish pivot.

In its policy announcement, the Fed stated: “Recent indicators of spending and production have softened. Nonetheless, job gains have been robust in recent months, and the unemployment rate has remained low. Inflation remains elevated, reflecting supply and demand imbalances related to the pandemic, higher food and energy prices, and broader price pressures.”

The rate hike decision was unanimous among Fed officials. The Fed cited the pandemic and Russia-Ukraine war as the major sources of inflationary pressures, which contradicts partisan political arguments that fiscal stimulus has been the primary driver of inflation.

Read This Story: Inflation: It’s Not Just You, America

Regardless, the Fed has been able to significantly raise rates without crashing the financial markets, a difficult feat. And if the markets don’t crash, the economy is less likely to crash.

This three-quarter-point move is the second straight hike by the Fed in its most aggressive drive in three decades against inflation.

Investors on Wednesday expressed their approval of the Fed’s efforts to corral inflation, and they interpreted Powell’s remarks as slightly dovish. The major U.S. stock market indices rose as follows: the Dow Jones Industrial Average +1.37%; the S&P 500 +2.62%; the NASDAQ +4.06%; and the Russell 2000 +2.39%.

We’ve had a lot of data to digest. The U.S. Labor Department reported Thursday that in the week ending July 23, the advance figure for seasonally adjusted initial jobless claims was 256,000, a decrease of 5,000 from the previous week’s revised level, but higher than the estimate of 250,000.

However, as Jerome Powell pointed out on Wednesday, the resilient jobs market and strong household finances are inconsistent with recessionary conditions. The consumer hasn’t freaked out (yet) and dramatically curtailed spending, although major retailers in Q2 earnings reports this week have been citing a slowdown in the acquisition of discretionary items.

After the opening bell Thursday, the major U.S. stock indices started trading in positive territory, despite the Q2 GDP report, but bounced between green and red as the day wore on.

Brace yourself for continued volatility. On Friday, we’ll get the latest personal consumption expenditures (PCE) price index reading, for June. The core PCE data for May suggested that perhaps inflation is peaking.

Amid the backdrop of tightening monetary policy and slowing economic growth, sales of new single-family houses in the U.S. fell to a two-year low in June, as prospective home buyers faced a “perfect storm” of unfavorable conditions: rising interest rates, a shortage of homes to buy, and the elevated prices of homes.

According to figures jointly released on July 26 by the U.S. Census Bureau and the U.S. Department of Housing and Urban Development, new home sales fell to a seasonally adjusted annual rate of 590,000 in June, the lowest level since the depths of the pandemic in April 2020 (see chart). 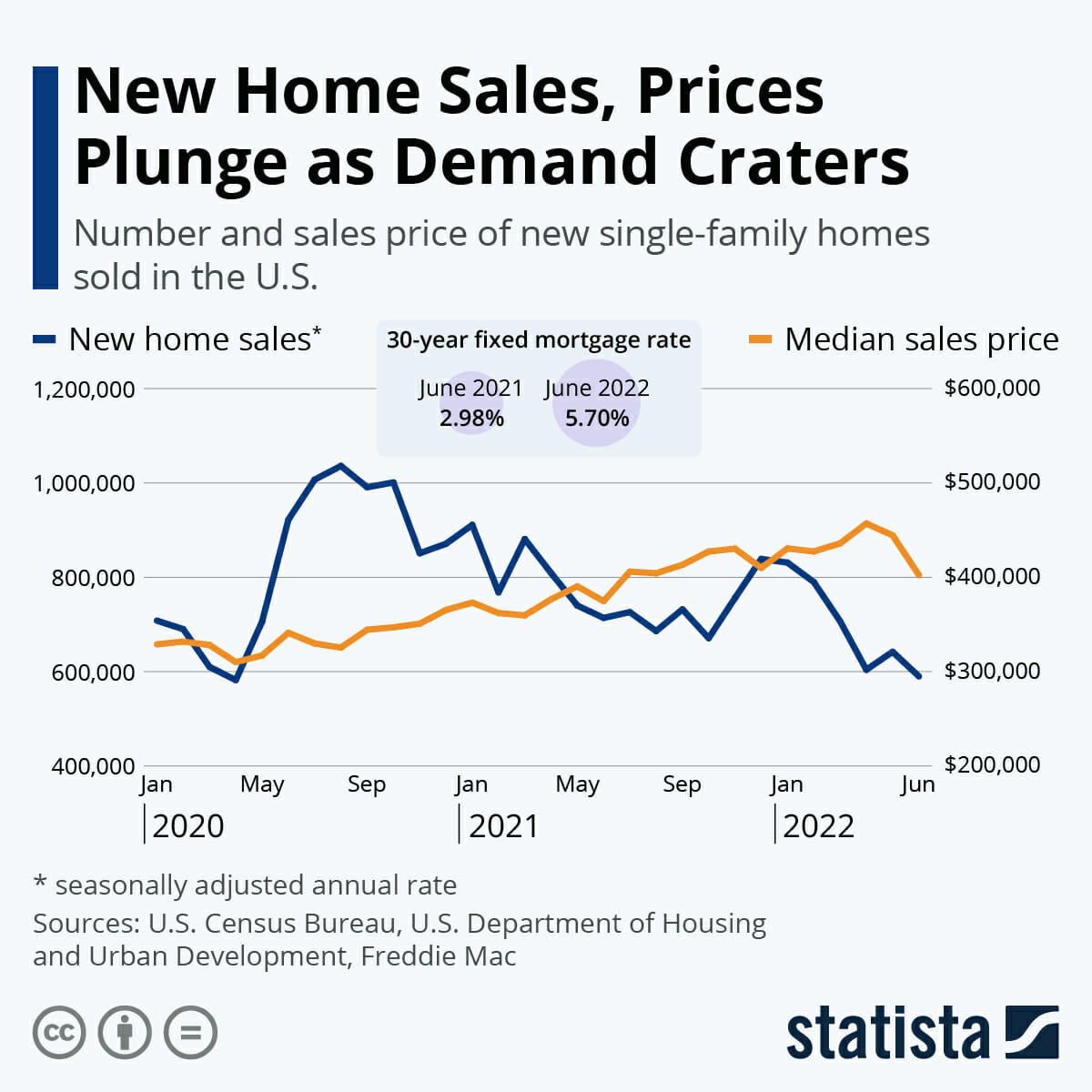 Home prices have been dropping, but many buyers are nonetheless getting priced out of the market. The housing market is a bellwether for the overall economy, so the latest data in this sector adds to the growing litany of worries.

Despite all of the headwinds I’ve just described, the major stock market indices have regained momentum and they’re well off their June lows. Wall Street is forward looking, and there’s a growing sense that the worst is behind us.

Are you looking for new growth opportunities that can thrive under the conditions I’ve just described? Consider the advice of my longtime colleague Dr. Stephen Leeb, the chief investment strategist of our premium publications, The Complete Investor and Real World Investing.