We’ve gotten a flurry of economic reports this week, some of them encouraging but most of them weak. The overall stock market has risen anyway. Investors have shrugged off the mixed bag of data, because they were expecting the numbers to be much worse.

Although U.S. economic growth has contracted and inflation remains hot, investors have been cheered by upbeat forecasts from bellwether companies such as Apple (NSDQ: AAPL) and Amazon (NSDQ: AMZN).

Such is the expectations game. It’s called the Wall of Worry, and investors have been climbing it this week, brick by brick.

The stock market in the first half of 2022 had been pricing in an earnings and economic collapse; that scenario has not occurred. There’s increasing sentiment among traders that the worst is behind us.

As of this writing Friday, after the opening bell, the major U.S stock market indices were extending their gains from Thursday and were on track for their second weekly gain.

International stocks also rose Friday, for their best month since late 2022. Global traders are betting that slowing economic growth in the world’s largest economy will put the brakes on monetary tightening.

It helps that economic growth in the euro zone has been better than feared, despite Russian President Vladimir Putin’s weaponizing of natural gas and rampant inflation in the region.

Eurostat reported Friday that the 19-member bloc’s gross domestic product (GDP) grew 0.7% quarter-over-quarter in the April-June period, and 4.0% year-over-year. Economists had expected a 0.2% quarterly rise and a 3.4% year-over-year gain.

The last day of the trading week witnessed a data dump that taken together depicted a conflicting picture. However, amid the gloomier numbers, there were enough silver linings to keep stocks aloft.

U.S. inflation remains elevated, that much is clear. The U.S. Bureau of Economic Analysis (BEA) reported Friday that the personal consumption expenditures (PCE) price index for June in the U.S. rose 6.8% on a year-over-year basis, the highest rate since January 1982. That number is up from 6.3% in each of the previous two months.

The “core” PCE, which removes volatile food and energy, increased 4.8% in June from a year ago, up one-tenth of a percentage point from May. It had reached a 40-year high of 5.3% in February.

The University of Michigan’s closely watched consumer sentiment index, released Friday, came in at 51.5 for July, registering little change from its historic low of 50 in June. The July number represents a year-over-year plunge in sentiment of 36.6%, which bodes poorly for future consumer spending.

But in some good news on that front, the BEA reported Friday that overall consumer spending in the U.S. rose 1.1% month-over-month in June, defying inflation, high interest rates, and consensus expectations for an increase of 0.9%. The 1.1% jump compares with the 0.2% increase posted in May. 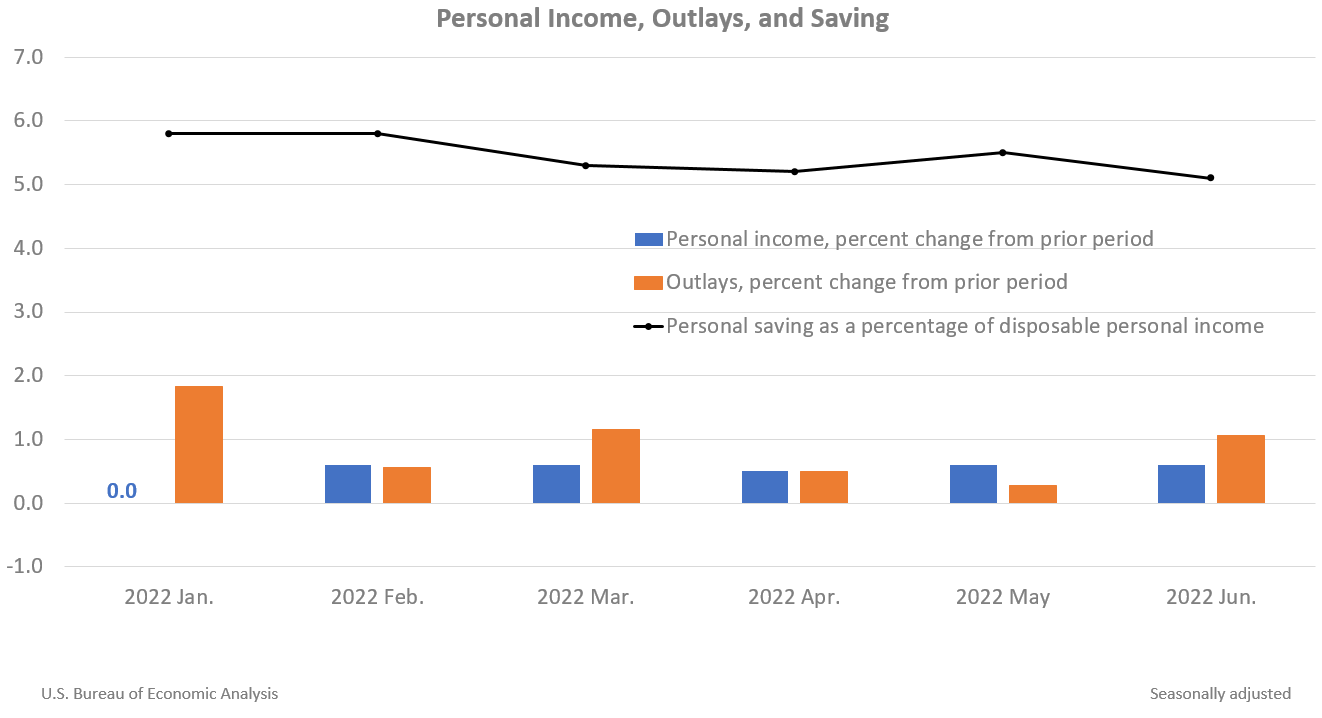 In bad news, the BEA reported Thursday that the economy contracted by an annualized rate of 0.9% in the second quarter following -1.6% growth in the first quarter. Two consecutive quarters of negative GDP are typically viewed as a “technical recession,” but many analysts are reserving judgment.

The National Bureau of Economic Research (NBER) Business Cycle Dating Committee, which is in charge of declaring recessions, is unlikely to put the U.S. economy in that category just yet.

NBER examines more than just GDP growth, and key factors such as employment expansion are still in solid shape. Investors are looking beyond recession fears and anticipating better days ahead.

Watch This Video: The Bear Gets Milder…For Now

Second-quarter S&P 500 operating results also have been a mixed bag, but overall, Q2 earnings are still on course for respectable year-over-year growth of 4.8%.

Making sense of the barrage of data…

Amid these conflicting economic signals, how should you trade? I bring your attention to my longtime colleague Dr. Stephen Leeb, the chief investment strategist of our premium publications, The Complete Investor and Real World Investing.

I first started working with Steve in 1990. Over the past three decades, through peace and war and bull and bear markets, Dr. Leeb has proven uncannily prescient about investments.