We now attempt to divine the enigmatic intentions of the High Priest of Finance, Jerome Hayden Powell.

As the head of an independent agency subject to little congressional or executive intervention, the chairperson of the U.S. Federal Reserve wields an enormous amount of power over America’s economy…and by extension, over your portfolio.

The only real check on a Fed chairperson’s authority is the requirement that policy be set through the consensus of the Federal Open Market Committee (FOMC).

It’s significant, then, that Fed Chair “Jay” Powell has been dropping hints that the central bank might make a dovish pivot in September, in response to a contracting economy.

The following chart shows rates peaking at 3.5% in December and then gradually coming down: 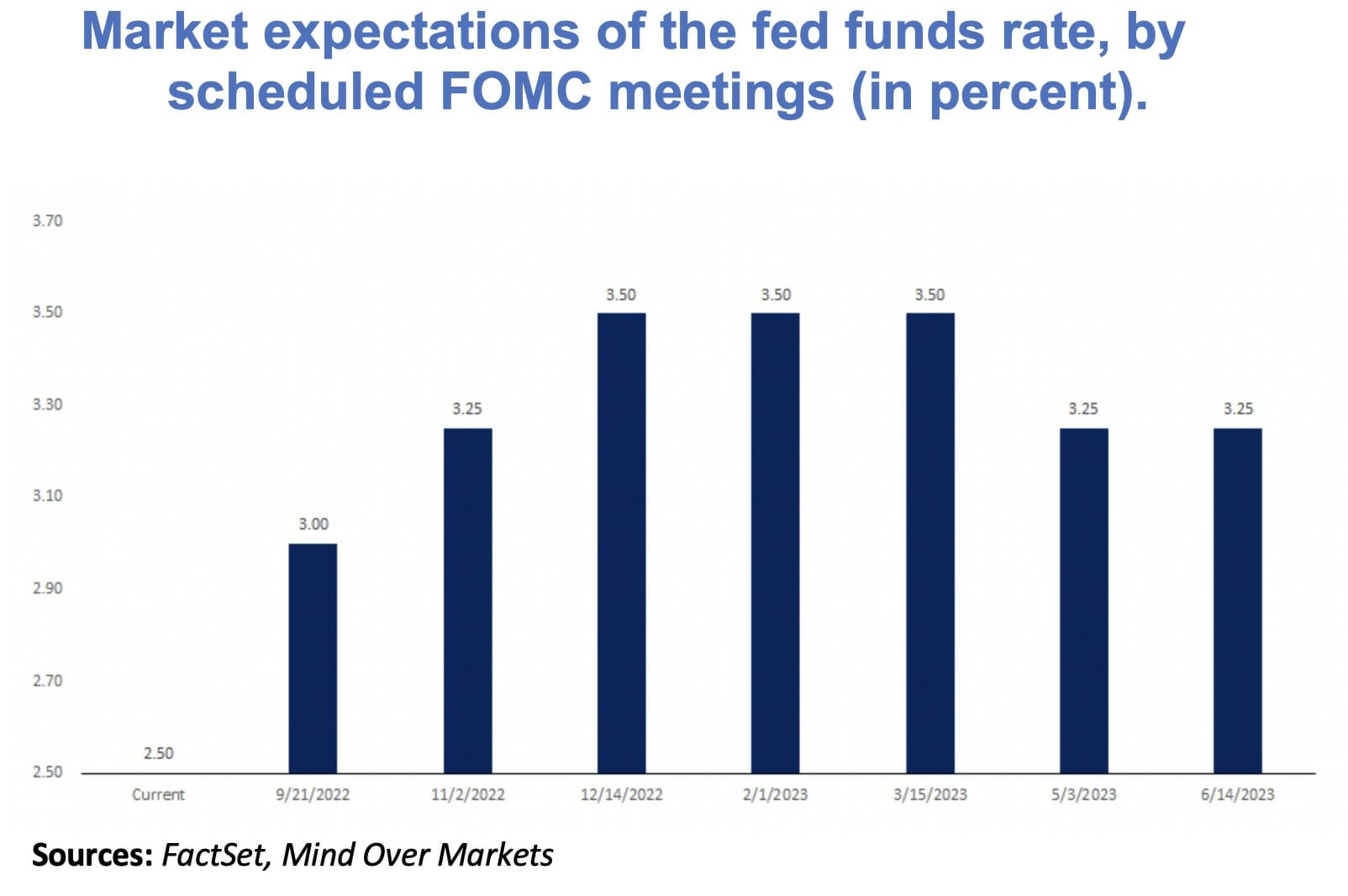 The Fed last week hiked rates by another 0.75%, but Powell also left the door open to a smaller rate hike at the bank’s next meeting in September. He noted the Fed could eventually slow the magnitude of rate hikes.

Specifically, Powell stated at his July 27 press conference: “As the stance of monetary policy tightens further, it likely will become appropriate to slow the pace of increases while we assess how our cumulative policy adjustments are affecting the economy and inflation.”

Those ostensibly bland words sent stocks soaring. Indeed, in July we witnessed one of the most powerful stock market rallies on record. On the first trading day of August on Monday, the major U.S. stock market indices took a breather and closed in the red. In pre-market futures trading Tuesday, stocks were extending their slide.

Volatility is here to stay, but investors are generally embracing risk-on assets again. In particular, retail investors have turned bullish on technology stocks. Growth is back in vogue.

But don’t get complacent. The rally is fragile. A black swan could throw optimistic assumptions into a cocked hat.

The Russia-Ukraine war could deliver a geopolitical shock (e.g., a nuclear power plant gets blown up and spreads radiation throughout Europe, which has been a recent concern); China could invade Taiwan (the fraught headlines about House Speaker Nancy Pelosi’s trip to that island democracy are causing market jitters); inflation could significantly worsen; the pandemic could take a turn for the worse; agricultural shortages could trigger a global food crisis…the list of dangers is long.

Of course, the insidious aspect of a black swan is the fact that, by definition, it’s a complete surprise.

S&P 500 companies that have posted negative Q2 EPS surprises have seen an average price increase of +1.2% two days before the earnings release through two days after. This percentage increase is well above the five-year average price decrease of -2.4%.

In search of growth…

Amid these uncertainties, where can you find reliable growth? I bring your attention to my longtime colleague Dr. Stephen Leeb, the chief investment strategist of our premium publications, The Complete Investor and Real World Investing.