American’s overpaid, overfed and overcoddled television pundits are in a verbal slugfest as to whether the U.S. is technically in a recession.

Federal Reserve Chair Jerome Powell said last week that he doesn’t think the U.S. is in a recession. The pessimists beg to differ. My suggestion is that you view the data holistically and not get hung up on semantics.

The U.S. in the first half of 2022 experienced two consecutive quarters of negative gross domestic product (GDP) growth. Some analysts use only this criterion to determine whether we’re in a recession, but most weigh other factors as well.

Recessions in the U.S. are officially declared by a committee of eight economists at the private, non-profit National Bureau of Economic Research (NBER). The numerous metrics applied (e.g., two straight quarters of negative GDP) tend to be backward looking.

The NBER committee purposely takes its time in making an announcement, often as much as a year after a recession has actually started. So when we get the official word from NBER, we’ll either be in the middle of a recession or at the tail end of one.

The economic optimists currently point out that a recession determination is belied by healthy readings on such vital indicators as jobs, consumer spending, corporate earnings, and personal and business balance sheets. What’s more, corporate profits and management guidance this earnings season have been surprisingly upbeat.

Where commentators come down in the debate largely depends on political affiliation and not necessarily empirical data. Generally, Republicans argue we’re in a recession and Democrats disagree.

How long will this partisan wrangling over a “recession” continue? At least until the November midterm elections are over.

Meanwhile, China has its red knickers in a twist over Taiwan. U.S. stocks sold off Tuesday, as U.S. House Speaker Nancy Pelosi (D-CA) embarked on an Asian tour, with Taiwan on the schedule.

China views the democratic island off its coast as a natural part of the mainland, much the same way Russian President Vladimir Putin considers Ukraine to be an integral part of Mother Russia.

Indeed, Putin’s revanchism has encouraged China’s own territorial ambitions, which in turn has prompted the Pentagon to war-game simulated Chinese attacks of Taiwan.

This brinkmanship between the world’s two largest economies is roiling markets, in large part because the island is home to tech companies that play outsized roles in the global economy. However, in pre-market futures trading Wednesday, the major U.S. stock indices were bouncing back, as corporate earnings continue to show strength.

Investors also are encouraged by the latest manufacturing data. The Manufacturing ISM Report On Business conveyed mixed results this week, but with more good news than bad.

Economic activity in the U.S. manufacturing sector grew in July, with the overall economy racking up a 26th consecutive month of growth, according to ISM’s survey of the nation’s supply executives.

The July Manufacturing PMI registered 52.8%, slightly down from the reading of 53% in June.

However, July’s figure beat expectations and indicates continuing expansion in the overall economy, after the severe pandemic-induced contraction in April and May 2020. Any reading above 50 constitutes expansion.

The report states: “Companies continue to hire at strong rates, with few indications of layoffs, hiring freezes or headcount reduction through attrition.”

The survey provided evidence that supply constraints are easing, with prices paid by factories for key inputs declining to a two-year low. That’s a sign that inflation probably has peaked.

In further good news from the survey, the ISM Manufacturing Employment subindex in the U.S. increased to 49.90 points in July from 47.30 points in June 2022, beating consensus forecasts of 47.40 (see chart). 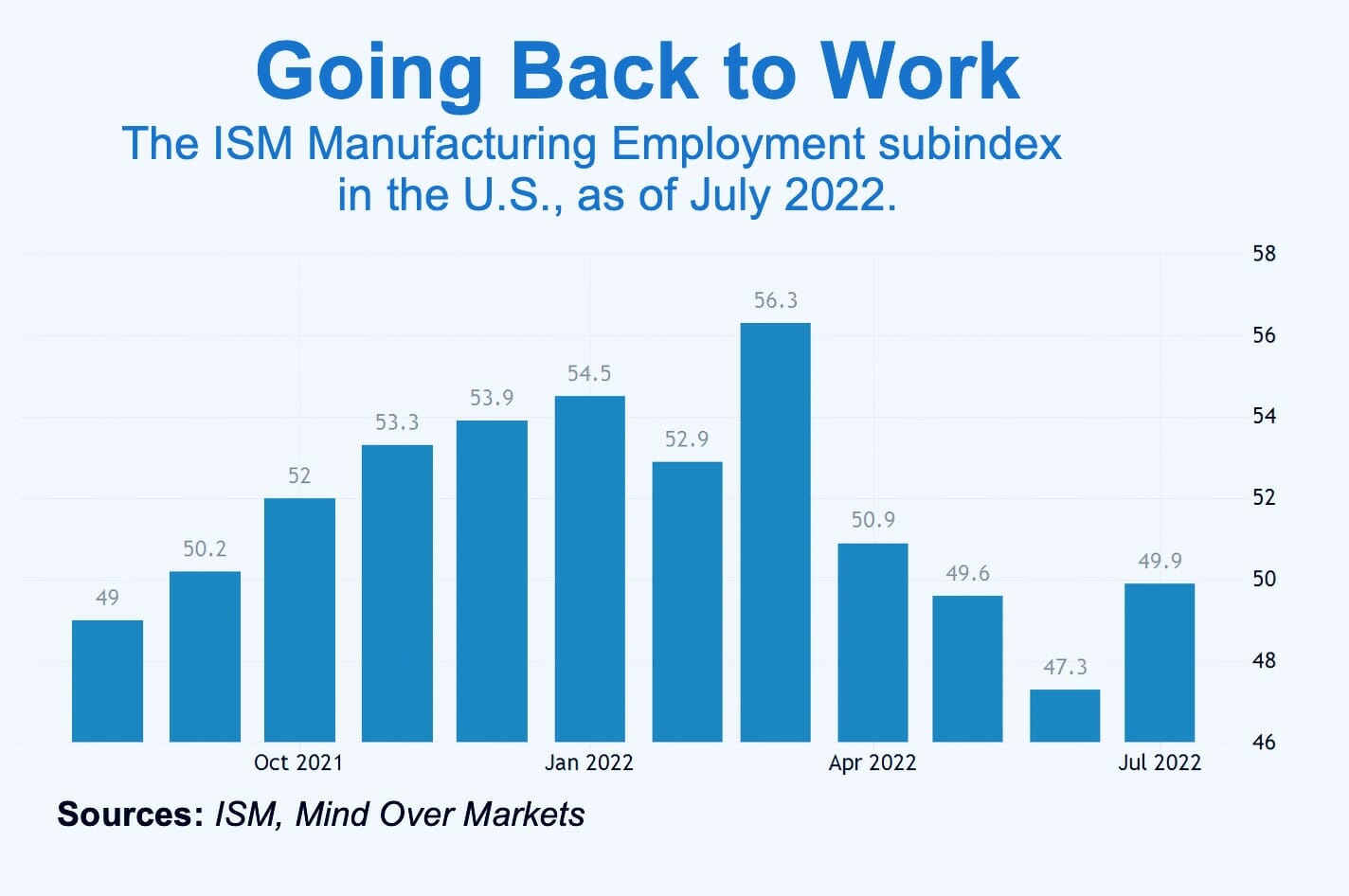 The ISM report is adding fuel to the debate as to whether the U.S. economy is in a recession. What stance should you take? Hit the mute button. Stick to company fundamentals. Keep your eye on corporate earnings and forward guidance.

You should also consider the advice of my longtime colleague Dr. Stephen Leeb, the chief investment strategist of The Complete Investor and Real World Investing.