Signs of a New Bull Market in Tech

There may be a new bullish trend emerging in the semiconductor sector.

Semiconductor stocks have been hammered over the last seven months. Supply chain worries derailed a sizeable rally that had been fueled by expectations of a boost in business form the automotive sector, as electric vehicles (EV) sales climbed in 2021.

Enter the war in Ukraine and the Federal Reserve’s interest rate hikes and the sector collapsed as rising commodity prices and supply chain disruptions turned investors sour on the chip sector.

The Bears Just Missed It

As the stocks of many tech companies dropped over the last few months, the bears missed several factors, which I noted many times when I highlighted earnings results of tech stocks in my premium service Profit Catalyst Alert.

One was that even as their stocks were getting crushed, many technology companies beat earnings and revenue expectations and gave upbeat future guidance notices during this period. Meanwhile, an abundance of tech company CEOs repeatedly noted on their conference calls that demand remained robust for their products. Even more recently, tech CEOs have noted that supply chain issues have been easing.

First, this was a classic case of tight supply and increasing demand, the recipe for all bull markets. Second, and equally important, there was plenty of notice that supply chain issues were improving, which meant that companies would be able to fulfill their growing order backlog. But the bears completely missed both of these facts.

In other words, short sellers and panicked investors were not listening to the CEOs, and tech stocks kept falling. As a result, their lack of understanding of the situation set up what could be a great buying opportunity, for at least the intermediate term.

When it became clear that Congress was about to pass the CHIPS act, through which the U.S. will grant nearly $280 billion in cash and tax incentives to the semiconductor industry to build plants in the U.S., the bears had to cover their short positions and the chip stock rally began.

The CHIPS bill is not without problems. For example, because Congress is involved, there’s plenty of pork in it. Indeed, much of the criticism of the pork aspects of the bill is based on the fact that the original bill had a $52 billion price tag on it, while the final bill’s tally was $280 billion.

Other criticisms are focused on the fact that it takes a long time to build a new chip production plant. But what’s being left out of the criticism is the fact that in Texas alone, Texas Instruments (NYSE: TXN) and Samsung (OTC: SSNLF) have already broken ground on new factories, while Intel (INTC) is making plans for a $20 billion plant in Ohio.

And while some of the criticism is fair, there’s still plenty of money that will make its way to increasing the manufacturing capacity for semiconductors in the U.S., which is a big deal.

Specifically, aside from providing jobs, the net effect will be a huge improvement in the supply chain for semiconductors. The sector has responded with the stocks of affected companies rising in price. But the chip sector is not alone.

So, who are the winners? Consider the EV companies and others who make chip dependent products. 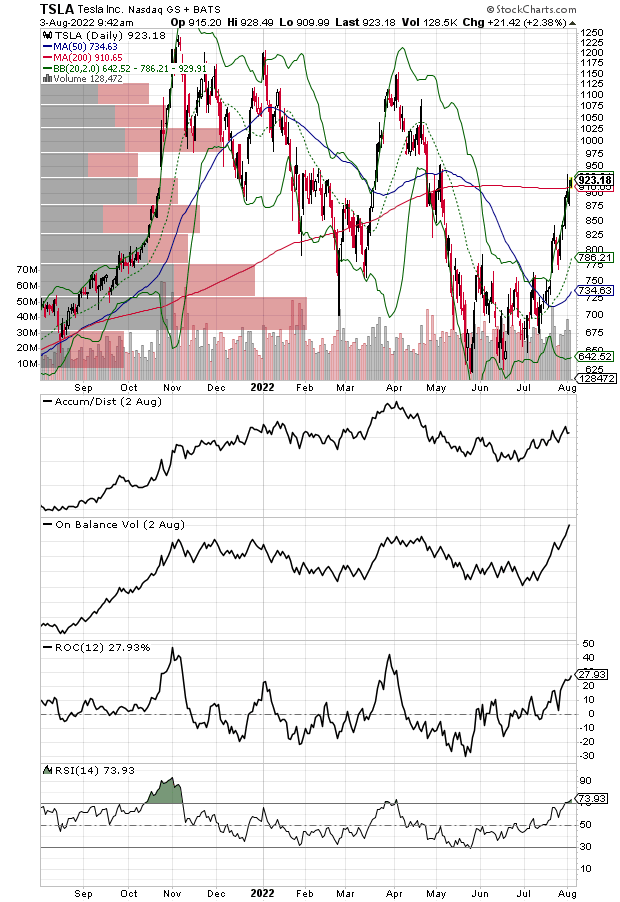 Sure, Tesla (NSDQ: TSLA) is the obvious one. And its shares rallied accordingly as the news hit of the CHIPS act passing and heading for the president’s desk.

Like it or not, TSLA remains the big player in EVs. Anything that makes the company’s life easier will help its controversial bottom line. But perhaps the biggest help will be the mitigation of the company’s geopolitical vulnerability from its factories in China and Germany.

That’s because in Germany and Europe, TSLA and other companies are facing an energy crunch as the war in Ukraine progresses and Russia cuts Europe’s natural gas supply. Moreover, in terms of its relationship to China, Tesla like other companies has been hampered by uncertainty due to frequent COVID-related shutdowns and recent Taiwan tensions.

TSLA shares have moved back above their 200-day moving average, a bullish sign that buyers are coming back to the stock. 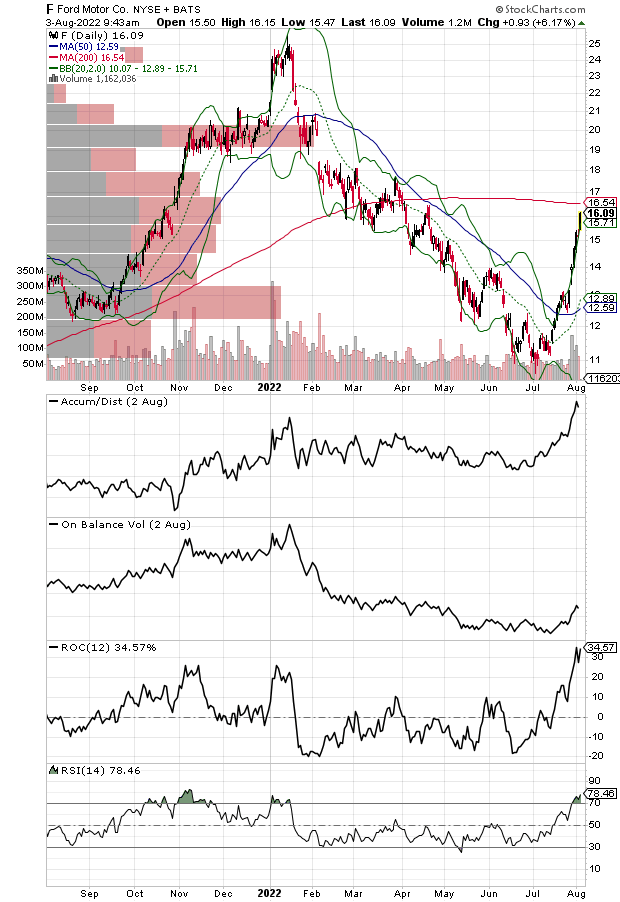 A dark horse company whose shares also jumped on the news was Ford Motor Company (NYSE: F). That’s because Ford is vying to become a much bigger player in EVs. The company recently announced layoffs of as many as 8,000 employees in its gas powered engine division, to reallocate resources to EV production. The job cuts raise about $50 billion for the transition. 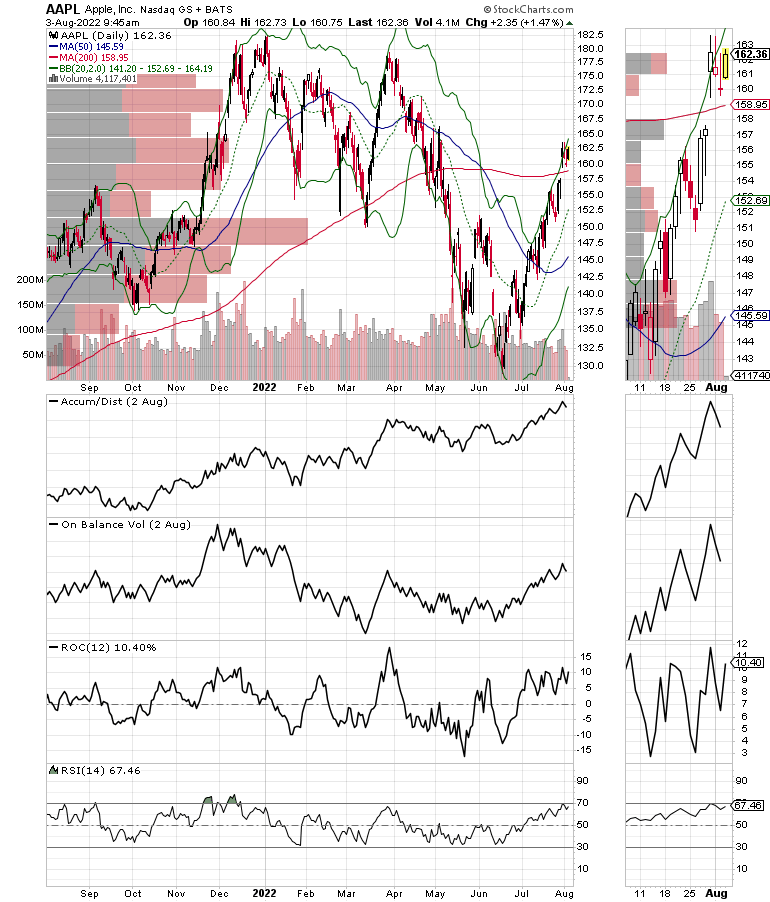 On the other side of the spectrum is Apple (NSDQ: AAPL), whose shares recently jumped on better-than-expected earnings news based on iPhone sales beating expectations.

Apple’s poorly kept secret is that it wishes to enter the EV business, which means that it will also benefit from semiconductor production increasing onshore in the U.S. Apple continues to make behind-the-scene moves in its quest for a slice of the EV pie.

Trading Them All Together

A great way to trade the chip sector is via the Van Eck Semiconductor ETF (SMH), an exchange-traded fund that carries all the big names in the sector, ranging from Nvidia (NSDQ: NVDA) to lesser known names such as On Semiconductors (NSDQ: ON). 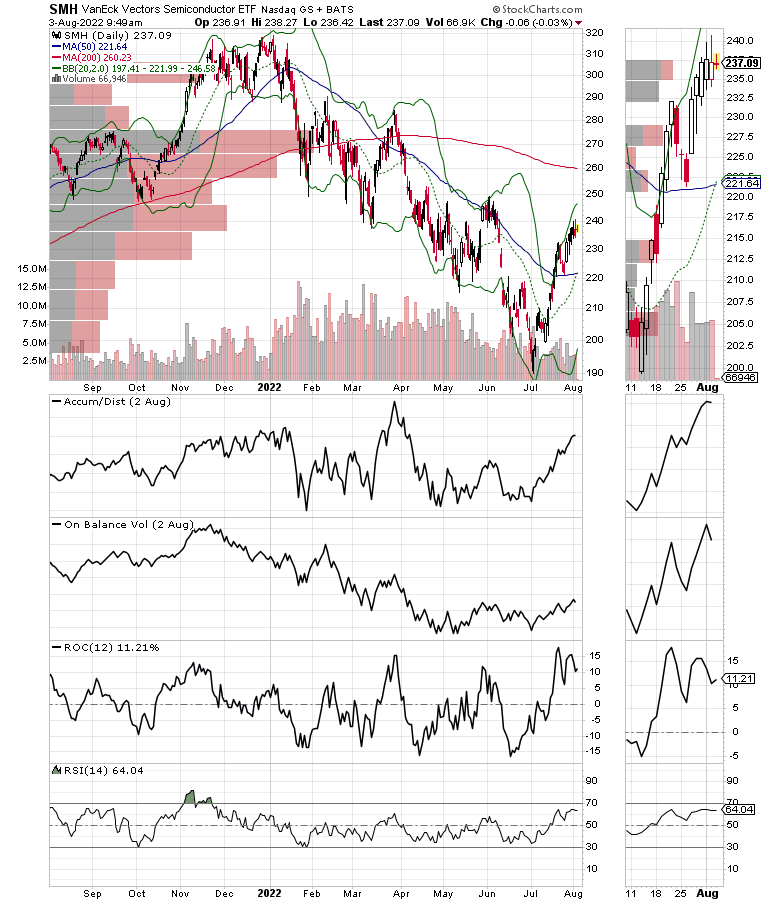 And although the chip stocks tend to trade as a whole, meaning that when one rallies, most of the others follow, SMH offers healthy diversification. This was greatly exhibited recently when shares of Intel (NSDQ: INTC) got clobbered after missing earnings and SMH did not fall significantly as most other semiconductor stocks were moving higher.

Here’s where things get positive for SMH. According to its price chart:

On the other hand, the rally could run into resistance, because there are some large Volume by Price (VBP, the big bars on the left of the price chart) that lurk at the $250-$270 price change.

That’s where buyers and sellers are congregating in large numbers and where the big decision on the future of prices will be made. A move by SMH above this price range would be bullish, while a failure would likely mean a decisive selloff.

Semiconductor stocks have a lot going for them right now, as a tradeable price bottom emerges. This is partially due to the passing of the CHIPS act by Congress, which will likely alleviate future supply chain problems for the technology sector.

Perhaps more importantly, investors were just not listening to company CEOs who were telling them that order backlogs were growing, demand was rising, and they had just beaten their most recent quarterly expectations.

The long-term fate of the price trend for SMH, and indeed the rest of the market, is a complex situation involving interest rates, geopolitics, and other factors. But today, the chip sector looks appealing for investors.

By trading the entire sector via an ETF such as SMH, investors can capitalize on the price trend for the underlying stocks as well as protecting themselves from bad news from a single company in the sector.

Editor’s Note: The next wave of technological innovation is poised to take off. When we’ve put inflation and the pandemic behind us, certain tech companies will explode on the upside. Our experts have come up with eight shocking next wave predictions for the future. Click here for details.