Will The Summer Rally Fizzle Out?

But don’t get too comfortable in your beach chair. The dog days of August could still bite investors.

When the next inflation numbers come out later this month, the summer rally could go from sizzle to fizzle. Here’s a look at the factors behind the recent stock market rebound, and the risks that could derail it.

The ISM non-manufacturing purchasing managers index for July, released Wednesday, showed unexpected strength, coming in at 56.7%, above the 55.3% posted in June and the highest in three months. The July number surpassed consensus estimates of 54%.

In addition, the Prices Index decreased for the third consecutive month in July, down 7.8 percentage points to 72.3%. 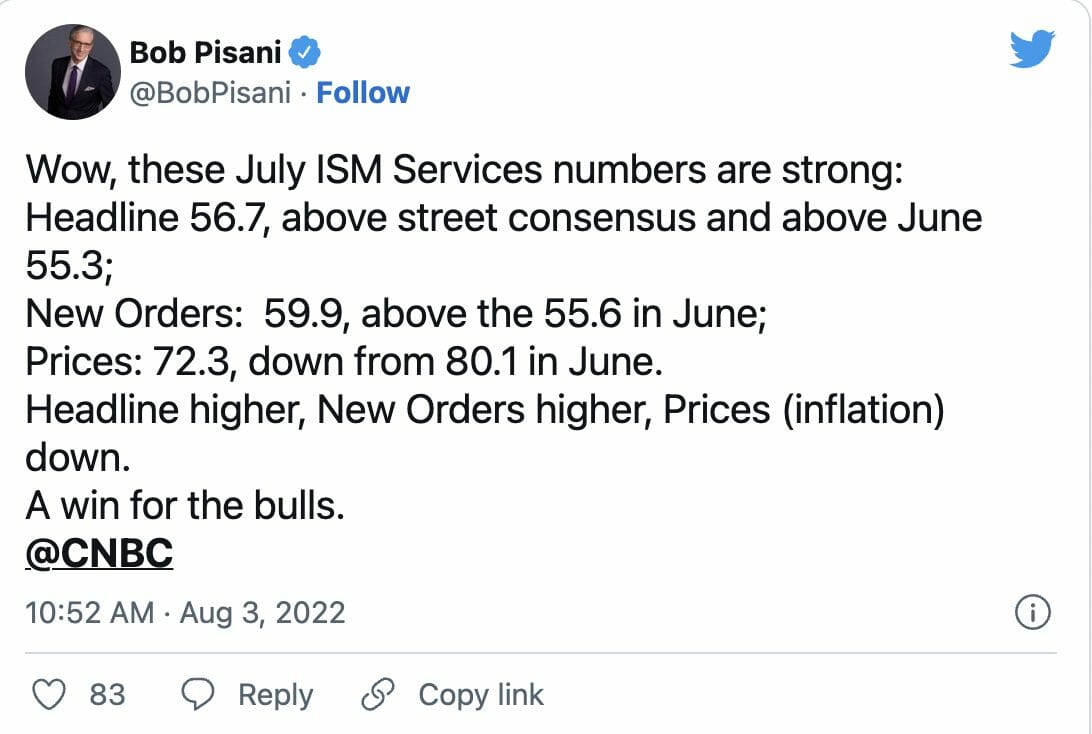 The tech sector has jumped the most, lifted by passage in the House and Senate last week of the CHIPS and Science Act.

Read This Story: Signs of a New Bull Market in Tech

President Biden is set to sign the bill on August 9. Beaten-down semiconductor stocks are regaining favor, amid this rare show of bipartisanship in Washington.

President Biden has had good luck with the U.S. House, but lousy luck with the House of Saud. His efforts to convince Saudi Arabia to significantly boost oil production came to naught this week, which is embarrassing for the White House but bullish for the energy sector. Constrained supply will keep crude prices elevated.

Biden two weeks ago visited Saudi Arabia, the world’s largest oil exporter and de facto OPEC Plus leader, in an effort to get the cartel to throw open the spigots.

Biden was criticized by human rights activists for his deference to the Saudis. The Kingdom has received international opprobrium for its gruesome murder of an ex-pat Saudi journalist who was critical of the regime.

In particular, Biden’s widely publicized fist bump with Saudi leader Mohammed bin Salman Al Saud was not a good look for the president. In return for his cajolery (some would say debasement), Biden was snubbed.

At its meeting in Vienna Wednesday, OPEC Plus agreed to a 100,000 barrel per day production hike for September. That increase is paltry (tantamount to a rounding error), which suggests oil prices are on track to stay high into the foreseeable future.

Unless derailed by an economic downturn that’s more severe than expected, the energy sector’s winning streak should continue.

OPEC ministers also warned Wednesday that global supplies are critically low and insufficient to meet anticipated demand in 2023. They decried the lack of investment during the worst of the pandemic in energy production and said the cartel’s ability to boost production remains limited.

When energy demand imploded in 2020 due to the coronavirus outbreak, the super-majors slashed capital expenditures. The rapid economic recovery from the pandemic left them flat-footed and supply shortages ensued.

The OPEC Plus cartel, which includes allies such as Russia, also is motivated by fears that the global economic slowdown will undercut demand. Western sanctions against Russia represent another wild card, because they have thrown the supply-and-demand equation out of kilter.

Oil prices have fallen from recent peaks and retail gasoline prices have significantly declined, but crude prices remain high, which impedes the fight against inflation.

Energy: in the earnings driver’s seat…

As of this writing, the S&P 500’s blended year-over-year earnings growth rate for the second quarter is 6.0%, which is higher than the estimate of 4.0% at the end of the second quarter (June 30). “Blended” combines actual results with projected ones.

This improvement in the S&P 500’s earnings performance was largely driven by positive earnings surprises generated by the energy sector, which to date has racked up a blended growth rate of an astounding 290.3%.

The blended year-over-year Q2 revenue growth rate for the S&P 500 of 12.3% is larger than the estimate of 10.1% at the end of the quarter (June 30). The energy sector, once again, has been the largest contributor to the increase.

The super-majors this earnings season have been reporting record profits and revenues, for the most part blowing past consensus expectations on the top and bottom lines.

Stay on your guard…

We’ve witnessed a sharp stock market rally, but risks abound, including the Russia-Ukraine war and tensions between the U.S. and China over Taiwan. And if recent signs that inflation is abating are proven wrong, we’ll probably get selloffs again.

Does all this uncertainty have you on edge? Consider the advice of my colleague Dr. Stephen Leeb, chief investment strategist of The Complete Investor and Real World Investing.

Over the past three decades, through peace and war and bull and bear markets, Dr. Leeb has generated big gains for his followers.