Why Is Buffett Big on Texas?

The stock market is frustrating these days, which is why it’s a useful time to review long-term investment strategies.

I often observe what Warren Buffett is doing, especially outside of the stock market, because this activity often points to a much bigger picture of the economy. Buffett’s asset machine, Berkshire Hathaway (NYSE: BRK.B), owns a wide variety of businesses that offer a glimpse into what’s happening in the real economy via their earnings streams.

Plainly speaking, if Warren is making money or making a big bet anywhere, it’s worth looking at that business sector closely.

And lo and behold, Warren seems to be big on Texas, where he’s making a contrarian play on real estate in the midst of a Federal Reserve interest rate hike rampage.

Buffett’s Nebraska Furniture Mart (soon to be renamed NFM) is building a megastore, hotel, and convention center in Austin, Texas. This is in addition to the already existing Grandscape complex anchored by a massive NFM which houses a movie theater, shopping mall, hotels, restaurants, a multistory luxury apartment building, and three live music venues, all located in the northernmost region of the Dallas Fort Worth (DFW) metroplex.

Grandscape is a destination whose parking lot, restaurants and retail outlets are usually packed to the brim. On any given morning you can drive by its southwest corner and smell the aroma of the barbecue pits from a shop called the Hard Eight. On the north end, there is a massive Scheel’s Sporting Goods store with an indoor Ferris wheel and an equally imposing overhead aquarium. And the Lava Cantina night club often features name acts such as DJ Snoopadelic, aka Snoop Dog.

Why Is Buffett Pouring Billions into Texas?

Specifically, Austin is where large tech companies such as Apple (NSDQ: AAPL) and Tesla (NSDQ: TSLA) have recently relocated large parts of their operations. Dell (NSDQ: DELL) has made the Austin area home for years. Property values are rising, but remain affordable, and there is a huge growth vibe in the region.

Recently, the state of Texas reported that its tax haul for 2022 surpassed previous records with collections of $75.21 billion. That’s over 25% year-over-year growth and reads more like a headline from a Berkshire Hathaway earnings report for a blowout quarter than a stodgy state of Texas press release.

Much of the gain was due to higher oil and natural gas revenues, which added up to nearly $11 billion to the haul. But sales tax collected equaled over $46 billion with motor vehicle and franchise taxes adding another $11 billion.

It all adds up to the fact that the Texas economy is booming, or at least outperforming much of the U.S.

Moreover, North Texas (where I live) and Austin, where the new NFM will be built, are growing their populations at a faster clip than other areas of the state, which affects local business activity and tax collections positively into the future. This often translates into tax breaks for companies which accentuates the virtuous cycle.

In addition, the growth in Texas is at least partially due to a population migration from California which had a 12% decrease in tax revenues over the same period as well as New York State which had a nearly 4% reduction. Both of these states continue to move toward higher taxes while property values remain highly unaffordable, factors that are likely to continue to influence the current migration dynamic.

According to Berkshire Hathaway’s most recent earnings report, the company made money from its railroad, manufacturing, utilities, reinsurance, and natural gas pipeline and energy businesses, whereby its insurance and real estate brokerage businesses lost money.

Specifically, Berkshire’s insurance businesses like Geico have taken a beating lately, a move that has prompted the company to close out its physical presence in several states including California.

Several of the big winners have to do with the migration dynamic as population shifts increase demand for transportation, and energy-related factors.

The stock market seems to disagree on Warren’s emerging big bets, sunbelt housing and the population shift in the United States. Shares of Berkshire Hathaway have been pounded along with the stock market of late. 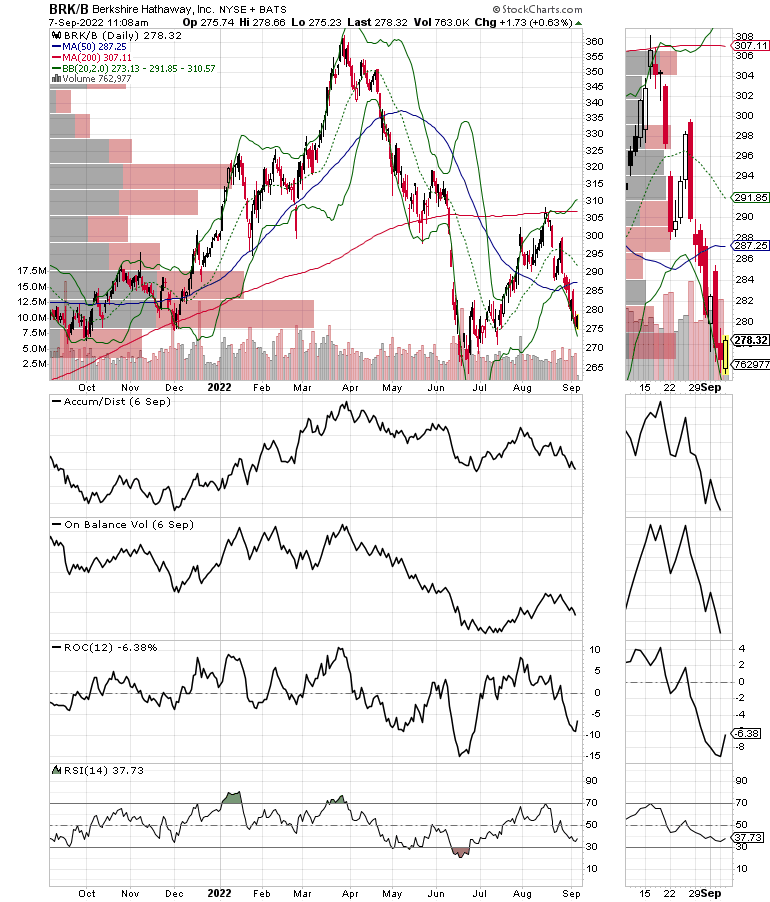 In fact, based on analysis of the down trending Accumulation Distribution Indicator (ADI), the price chart for BRK.B suggests that short sellers are having a field day. Moreover, the On Balance Volume (OBV) indicator’s own decline suggests that stockholders are bailing out as well.

Interestingly, however, there have been no insider sales, or share purchases in Berkshire within the last six months.

That suggests that the company is focused on its long-term business strategies, which are backed by the nearly $31 billion in cash on its balance sheet. BRK has been putting that cash to work as it dropped by $9 billion from March to June.

My Money Is with Warren

Patience is a virtue and equally important is the central theme to Warren Buffett’s investing philosophy: “Own the business, not the stock.”

Buffett clearly saw the Texas future early, because although it’s now a huge hit, his North Texas NFM anchored Grandscape project started in 2011. And now that the demographics are further increasing in his favor, he’s adding an Austin store.

This is on top of owning some of the largest realtors in North Texas, e.g. Ebby Halliday, Dave Perry Miller, and Allie Beth Allman and Associates. Berkshire also owns at least 19 other major realtors in other sunbelt states including Florida, Georgia, North Carolina, and Alabama. along with related mortgage and loan servicing businesses.

It’s possible that Buffett’s real estate holdings will continue to suffer as the Fed raises rates. However, his huge macro bet, based on migration patterns in the U.S. and tax data, suggests the odds are in his favor.

Editor’s Note: Looking for an investment opportunity that takes advantage of the investing principles espoused in this article by Dr. Joe Duarte? Click here for details.