As the U.S. midterm elections approach, the latest polls show that six out of 10 Americans think the nation’s economy is in an economic recession.

A majority of Democrats assert we’re not in a recession, whereas a majority of Republicans and Independents disagree. (Two starkly different realities in America. So what else is new?)

Read This Story: Politics and Your Portfolio: They Don’t Mix

For investors, the practical question is, to what extent does tumult in the financial markets reflect underlying economic weakness? After all, as economist Paul Samuelson once famously quipped, the market has predicted nine of the last five recessions.

Since the beginning of the year, market volatility has returned with a vengeance. Despite the powerful stock market rally this summer, we’re still officially in a bear market.

For the first half of 2022, the U.S. suffered two consecutive quarters of negative gross domestic product (GDP) growth. However, many economists still haven’t characterized that period as a recession since the contraction was not accompanied by a similar deterioration in other key economic factors, such as employment.

The major U.S. stock market indices snapped a three-week losing streak to close out the holiday-shortened week in positive territory. Stocks extended their gains on Monday, but equities hit a brick wall Tuesday with the release of the latest inflation report.

The U.S. Bureau of Labor Statistics (BLS) reported Tuesday that the consumer price index (CPI) rose higher-than-expected in August. Shelter, food and medical care were among the most inflationary sub-indices.

On a “core” basis, which excludes the volatile food and energy components, the CPI in August rose 6.3% over last year and 0.6% over the previous month. Expectations had called for a 6.1% annual increase and 0.3% monthly increase in core CPI.

Tuesday’s CPI report is one of the last inflation readings the Federal Reserve will see ahead of its September 20-21 meeting, when the central bank is expected to announce its third consecutive 75-basis-point interest rate hike.

The CPI report for August was a shocker that sent equities into a tailspin. The major U.S. stock market indices closed sharply lower Tuesday, as follows: the Dow Jones Industrial Average -3.94%; the S&P 500 -4.32%; the technology-heavy NASDAQ -5.16%; and the small-cap Russell 2000 -3.91%. Tech stocks were among the hardest hit, with chipmakers leading the decline. The NASDAQ 100 dropped 5.54%.

Tuesday’s selloff was across the board, with all Dow stocks, and all S&P 500 sectors, finishing in the red. The benchmark 10-year Treasury yield climbed above 3.42% and the CBOE Volatility Index (VIX), aka “fear index,” spiked more than 16%.

One positive for the stock market this year has been healthy (albeit slowing) corporate earnings growth. The year-over-year earnings per share (EPS) growth rate for the S&P 500 in the second quarter came in at 6.0%, according to FactSet.

It’s noteworthy that recession fears are spreading throughout C-suites. FactSet (the data provider for Investing Daily) searched for the term “recession” in the conference call transcripts of all the S&P 500 companies that conducted earnings conference calls from June 15 through September 8.

Among those companies, 240 cited the term “recession” during earnings calls for the second quarter, which far exceeds the five-year average of 52 (see chart). 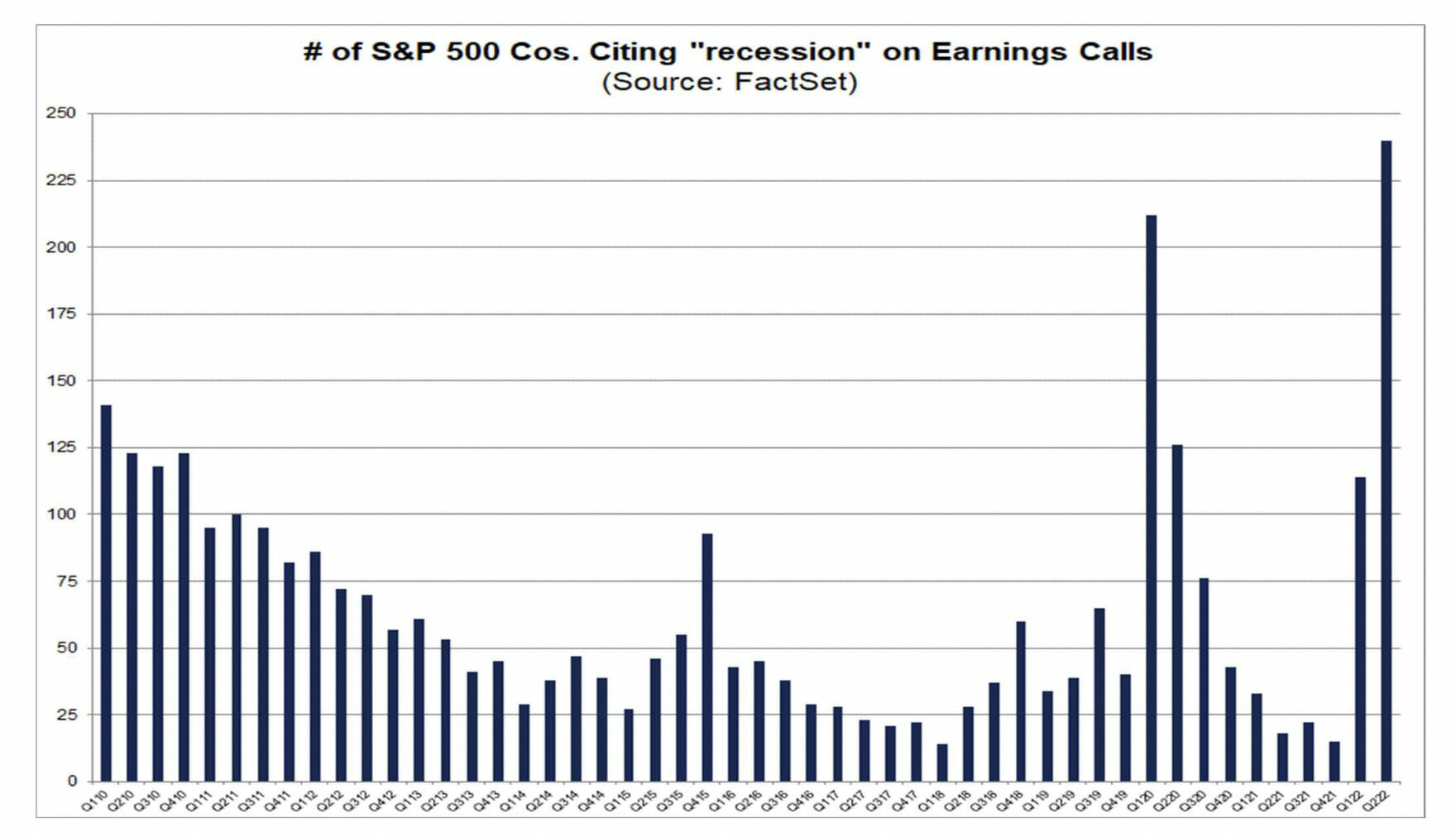 The financials (53) and industrials (37) sectors accounted for the highest number of companies that cited “recession” on Q2 earnings calls.

Accordingly, analysts have been more pessimistic in their revisions to earnings estimates for the third quarter compared to recent quarters.

And yet, although their growth rate is slowing, earnings projections haven’t imploded. Analysts expect earnings growth of 4.8% for Q4 2022, and 7.9% for calendar year 2022. Strong jobs growth and resilient consumer spending also defy the recession narrative.

But risks remain. Notably, the Russia-Ukraine war continues to take a bloody toll on the global economy. The war also is exacerbating inflation in the U.S. and overseas.

As Ukraine achieves stunning successes on the battlefield, Russian President Vladimir Putin is getting challenged by Russia’s pro-war elite. A particularly aggressive move by Putin could easily spook the markets.

Want to mitigate the risks that I’ve just described, without sacrificing performance? Turn to my colleague Jim Fink, chief investment strategist of Velocity Trader. Jim has developed a proprietary investing method that consistently beats Wall Street in markets that are going up, down or sideways.