In addition to being a financial analyst, I’m also a physician, so please forgive the following medical metaphor.

As it fights inflation, the Federal Reserve is cutting off the stock market’s blood supply, thereby creating the potential for a bad case of gangrene in the economy.

In medicine, a “compartment syndrome” develops when a severely injured limb, such as what we may see with a crush injury, swells to the point that because of the constraints of the skin and underlying tissues, the deeper tissues start to lose their blood supply as they get squeezed.

If this lack of blood to the deep tissues is not remedied, gangrene develops and the limb is eventually lost. Moreover, the potential complications of advancing gangrene such as sepsis and the potential death of the patient rise significantly the longer treatment is delayed.

The cure, of course, is to surgically open the skin via precisely placed incisions in order to ease the pressure and to relieve the constraints on the blood supply to allow healing to begin.

This works if surgery is done in time, although there will be lasting scars and there is no guarantee that full function will return to the injured limb.

The Fed Is Crushing the Stock Market

The Federal Reserve squeezing the financial system like a crush injury squeezes a limb and the stock market is developing a compartment syndrome as higher interest rates and qualitative tightening (QT) are squeezing the market’s blood supply, liquidity.

Liquidity, of course, is at its core the amount of money that is available for business transactions, including stock trading. When the Fed “eases” it not only lowers official interest rates such as the Fed Funds and Discount Rate, it puts money in the banking system by purchasing bonds from financial institution. As a result, market interest rates, such as the U.S. Ten Year Note yield (TNX) fall.

During “easy” times, there is plenty of money in the system to lend and to trade stocks.

When the Fed “tightens” it reverses the process and interest rates rise.

You can see the effects of the Fed’s recent interest rate increases have led to an increase in the U.S. Ten Year note yield (TNX), which seems headed for the 3.5% yield area.

What makes this particular cycle of “tightening” more severe, however, is the fact that the Fed is taking money out of the financial system systematically by a process known as QT, in which it sells bonds from its balance sheet on a monthly basis. Currently, QT is proceeding at a pace which removes $95 billion per month from the financial system.

Since the process started in September, if all goes as scheduled, over the next year the Fed will have removed $950 billion from the financial system. That’s nearly a trillion dollars that won’t be on the books for the likes of JP Morgan (NYSE: JPM), and Goldman Sachs (NYSE: GS) among other big money firms, including hedge funds, and mortgage lenders.

That means that the U.S. economy will have a trillion dollar deficit to deal with. And that means that a potential trillion dollars won’t be available to trade stocks, or make loans, or perhaps even make payroll for some, which means unemployment could increase, regardless of the massaged monthly employment report numbers.

I like to compartmentalize the stock market into three different components: sentiment as in the options market, the trend in stocks – measured by the market’s breadth, and liquidity measured by the Eurodollar Index (XED).

I measure the market’s sentiment by focusing on the CBOE Volatility Index (VIX), which I wrote about in some detail recently. I recommend reviewing that article for background.

Concisely, however, with VIX rises it means that fear is rising in the market. Rising fear often precedes a decline in stock prices.

Finally, I measure liquidity via the Eurodollar Index (XED). Eurodollars are offshore unregulated U.S. Dollar deposits used by large financial entities and corporations to move money from one place to another quickly in order to meet obligations.

Because they are unregulated, the changes in financial conditions, the ease and availability of funds are quickly evident. As a result, changes in the trend in XED offer clues as to how liquid the system is at any one time.

When you put the VIX, the NYAD, and the XED together in the same chart, you can see the market’s sentiment, its state of liquidity, and the effect of sentiment and liquidity on stock prices. 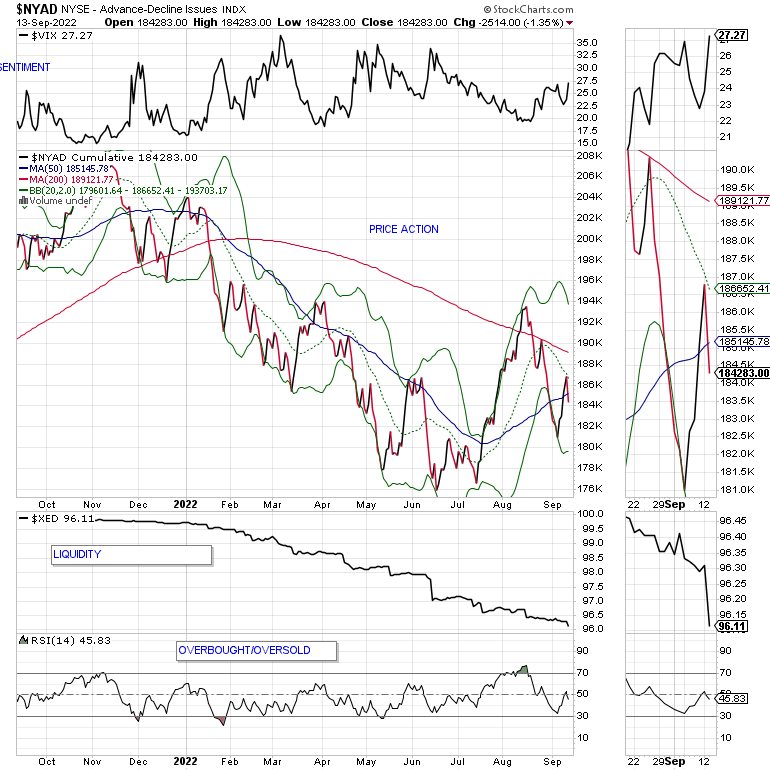 Note the high rate of correlation between the rise and fall in VIX, as it pertains to the NYAD. Moreover, note that XED has been falling steadily since December 2021 when the Federal Reserve made it clear that it would be raising interest rates for an extended period of time.

Moreover, the current picture is at the very least concerning. Consider the following:

When stocks crashed on 9/13/22, NYAD reversed its recent short term bounce and moved back below its 50-day moving average (blue line). Moreover the decline in stocks was accompanied by a steep rise in VIX and an even sharper crash in XED.

What that means is that traders are getting increasingly bearish, that liquidity is drying up, and that stocks are getting squeezed – a financial compartment syndrome.

The Federal Reserve is creating a financial market compartment syndrome and risking economic gangrene by aggressively reducing the liquidity in the financial system.

Liquidity is the lifeblood of the economy and the equity market. When traders get bearish and liquidity dries up, stock prices fall.

Even though, we’ve seen this process unfold over the last nine months, it seems to be accelerating.

Only when these conditions are reversed do the odds of a reliable and sustainable rising stock market on trend return.

Of course, as I previously noted, if a compartment syndrome is not treated in a timely fashion there is no guarantee of a full recovery.

Editor’s Note: Want to mitigate the risks described in the above article, without sacrificing performance? Turn to our colleague Jim Fink, chief investment strategist of Velocity Trader. Jim has developed a proprietary investing method that consistently beats Wall Street in markets that are going up, down or sideways.