Swimming in a Shark-Infested “Dark Pool”

Every morning, I scan the list of stocks with the biggest daily moves. I do it partly out of curiosity, but also to see if there is a major story brewing.

Last Tuesday, I noticed that AMTD Digital (NYSE: HKD) was up more than 300%. That day, trading volume was nearly ten times its 10-day average.

Clearly, somebody was buying a lot of HKD and I wanted to know why. I was especially curious because the overall direction of the stock market last week was down thanks to a hot inflation report for August.

However, the more I looked into HKD the less sense it made to me. Initially, I assumed the company had become the subject of a hostile takeover bid. That was not the case.

In fact, AMTD Digital went public just two months ago. On July 15, the stock started trading at $13. One week later it was up to $68, which is not unusual for a “hot” IPO (initial public offering).

But here is where the story starts to get weird. Over the next couple of weeks, HKD skyrocketed above $2,500. 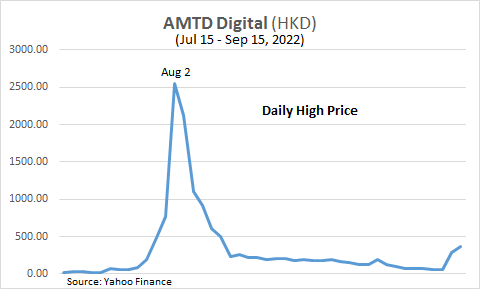 I’ll save you the trouble of doing the math. That works out to a gain of roughly 32,000% in less than a month.

Okay, somebody (presumably an institutional investor) wanted to buy a lot more shares of AMTD Digital and was willing to pay a lot to get them. That is also not usual in the weeks following an IPO.

However, most institutional investors have a maximum price that they are willing to pay for any stock. Assuming, of course, that their motivation is to generate a positive return on investment.

At the risk of sounding paranoid, I can’t help but wonder if that really is what motivated those purchases. It could be a long time, possibly decades before HKD ever reaches $2,500 again.

By the start of last week, HKD was back below $60. Trading volume fell to only 12,100 shares that day. Whatever excitement drove it higher a month prior seemed to have evaporated.

That was two weeks after AMTD Digital released its fiscal 2022 full-year results. The company reported a 17% increase in net profit after tax compared to the previous year.

That’s a solid result, but it does not justify the extreme share price appreciation that occurred both before and after it became known. However, there was a comment in the press release accompanying those results that got my attention:

Subsequent to the fiscal year-end date of April 30, 2022, AMTD IDEA Group announced the injection of AMTD Assets Group into the Company. MTD Assets, one of the four subsidiary groups of AMTD Group, holds a global portfolio of premium whole building properties, with a fair market value of approximately US$500 million.

Bear in mind, AMTD Digital is purportedly in the business of “investing in and developing digital media and multi entertainment segments.” It is not clear how the acquired real estate assets support that mission statement.

What might explain it is that AMTD Digital is based in Hong Kong, and almost all of its stock is held by institutional investors. Those same investors have close ties to the Chinese government, which often dictates where state-controlled assets end up being held.

Perhaps what is really going on with the stock is nothing more than insider trading. If so, then we may soon hear about a lot more properties being “injected” into the company’s balance sheet.

Another possible explanation for last week’s share price surge is a short squeeze. A short squeeze occurs when speculators that have sold the stock short have to cover their positions by buying shares.

At first, that explanation didn’t seem to fit, either. According to the New York Stock Exchange, short interest in AMTD Digital was close to zero. And since almost all of the shares are held by institutional investors, that made sense.

In other words, short volume in HKD is equal to nearly half of its float. That’s a huge number and indicative of a stock that is either grossly overvalued or about to go bankrupt.

It appears that two deep-pocketed groups of investors have lined up on either side of this trade, and only one of them can prevail. Eventually, either the short sellers will capitulate and cover their positions or the institutioanl investors will abandon the stock.

I don’t know which side will win, but it should be fun to watch. And I definitely won’t participate in this trade since there is no way of knowing what might happen next. I don’t like the idea of swimming in the deep end of the dark pool with so many sharks circling around me.

But I know of one analyst on our team, who can navigate even the most treacherous waters: Jim Fink.

My colleague Jim Fink is chief investment strategist of Velocity Trader. Jim has developed a proprietary investing method that consistently beats Wall Street in markets that are going up, down or sideways.