Awaiting Word From The Oracle

“Now you’re not naive enough to think we’re living in a democracy, are you buddy? It’s the free market. And you’re a part of it.” Those words were uttered in the movie Wall Street (1987), by the cinematic villain we all love to hate, Gordon Gekko.

In this great democracy of ours, the person with the most power right now over our daily lives isn’t President Biden, nor any member of Congress. It’s Federal Reserve Chief Jerome Powell. Yes, he’s appointed by the president and his appointment must be approved by Congress, but Powell is essentially unelected. And just a few words from him on Wednesday will move trillions of dollars.

At the conclusion of its two-day meeting Wednesday, the Fed’s policy-making Federal Open Market Committee (FOMC) will announce its latest monetary stance and it’s widely expected that it will hike rates by 75 basis points (bps). Powell will then give his customary press conference in the afternoon, and if history is any guide, his choice of words will move markets sharply up or down.

Previous expectations had called for a milder rate hike of 50 bps, but hotter-than-expected inflation readings have quashed those hopes. If the Fed surprises Wall Street and hikes rates by 100 bps, stocks would probably swoon. As investors anxiously await word from the Fed’s oracle, volatility has accelerated.

A normal yield curve is one in which longer maturity bonds have a higher yield compared to shorter-term bonds, because of risks associated with time. If they sense a recession is on the way, many investors will start to invest in long-term U.S. Treasury bonds, because they’re pessimistic about the short term. Bond prices and yields move in opposite directions.

Historically, inverted yield curves tend to signal an impending recession, but keep in mind, the lag time is from six to 18 months.

We’ve witnessed higher yields on a global basis, as the world’s central bankers tighten monetary policy in their respective countries.

Another sign that traders fear a recession is the recent downward slope of crude oil prices, reflecting expectations of less energy demand due to an economic slowdown.

Meanwhile, corporate earnings growth has decelerated. For the third quarter of 2022, the estimated earnings per share (EPS) growth rate for the S&P 500 is 3.5%, according to research firm FactSet.

In light of recession worries and the earnings growth slowdown, it’s noteworthy that sentiment still skews to the “Buy” side (see chart). 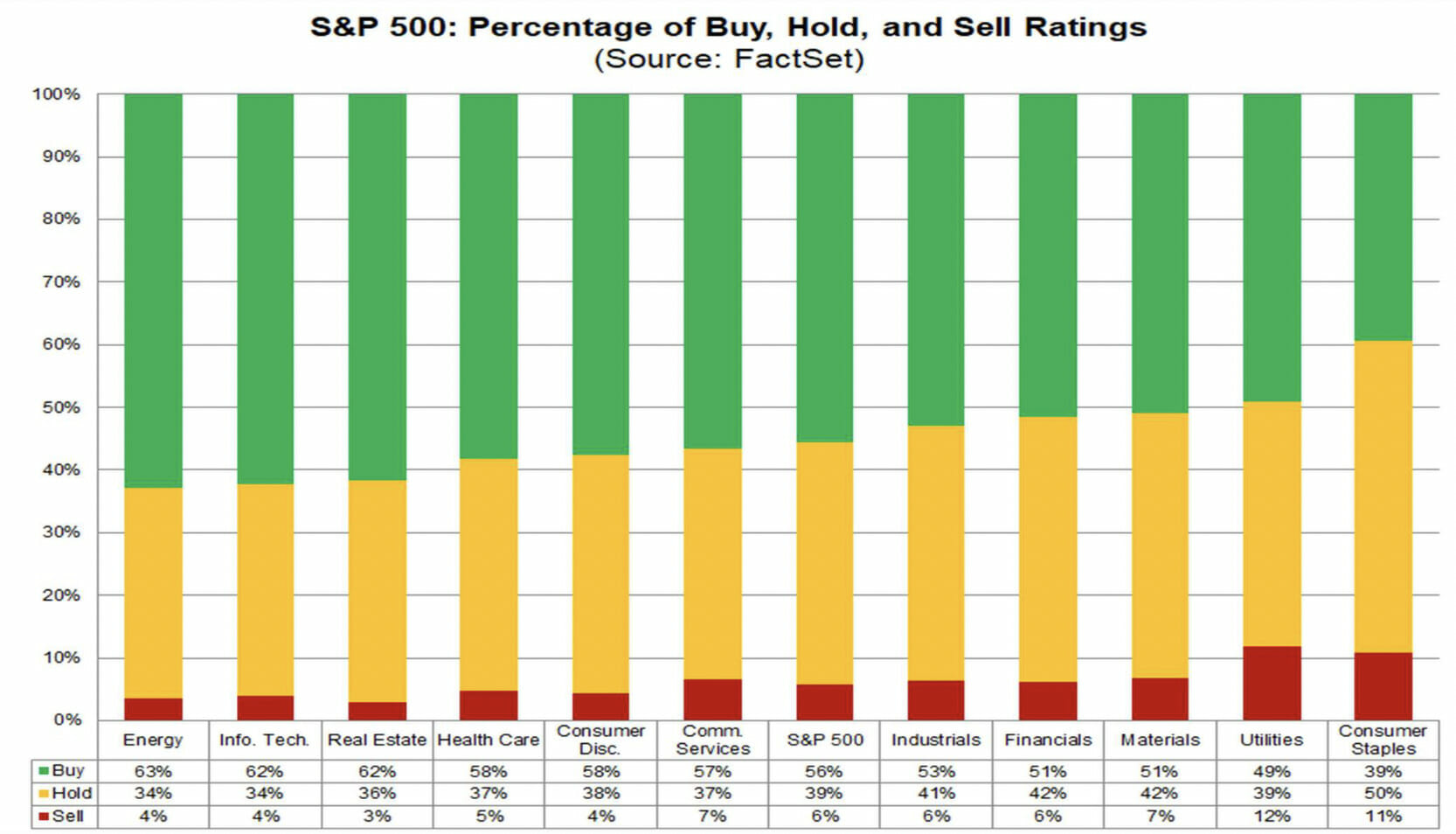 According to the percentage of Buy ratings, analysts are most optimistic about the energy (63%), information technology (62%), and real estate (62%) sectors.

Stay patient. It seems that the Fed and financial markets are getting more in sync on interest-rate expectations. The Fed could pause rate hikes in early 2023, to determine the effects of higher rates and then move accordingly.

Looking for good buys now? In this era of war, inflation, and rising rates, corporate consolidation is the name of the game. Even the whisper of a “mega-merger” can hand investors enormous returns. My colleague Nathan Slaughter, chief investment strategist of Takeover Trader, just pinpointed a potential takeover deal that could dwarf them all.