All the whiskey in Lynchburg, Tennessee
Just couldn’t hit the spot
I gotta hundred dollar bill
You can keep your pills, friend
It’s all going to pot…

The latest news and trends in the marijuana industry confirm that the nation is indeed going to pot.

Let’s start with a new Gallup poll that shows more Americans now smoke marijuana (via pipes, bongs and joints) than tobacco cigarettes. It’s the first time Gallup has found pot to be more popular than tobacco and it serves as yet another reminder that society is radically changing in marijuana’s favor.

What’s especially remarkable about these findings is that marijuana remains banned on the federal level.

According to the survey, a record 16% of Americans say that they smoked cannabis in the past week, compared to only 11% for a tobacco cigarette.

Gallup also found that more than twice as many Americans think that marijuana has a positive impact on its consumers and society at large than say the same about alcohol.

Fifty-three percent of respondents said marijuana has a “positive” impact on the consumer, versus 45% negative, and 49% said pot is beneficial for society, versus 50% with the opposite view.

As for alcohol, 27% of respondents said it’s beneficial for the individual drinker and 23% said it’s positive for society. Fully 75% of Americans said alcohol is bad for society, and 71% said it’s bad for individuals who consume it.

Marijuana, once seen as the Devil’s Weed, is increasingly eclipsing cigarettes and booze in America’s mainstream culture. Here are the latest legal and political ramifications.

Arkansas. The Republican Party in Arkansas controls the offices of governor, secretary of state, attorney general, and both chambers of the state legislature. The GOP in this state is uniformly opposed to marijuana legalization, but despite its political dominance, it will have a hard time overcoming public sentiment in favor of lifting pot restrictions.

A marijuana legalization initiative will appear on the November ballot in Arkansas and a new poll shows that the measure is widely popular with voters.

Here’s the language of the survey question:

“On November 8th, voters will be asked to consider one proposed constitutional amendment proposed by the people. Issue 4 would authorize the possession, personal use, and consumption of cannabis by adults in Arkansas sold by licensed adult use dispensaries and provide for the regulation of those facilities. If the election were held today, would you vote for or against Issue 4?”

Read This Story: Midterms 2022: Don’t Step on The Grass

The survey of Arkansas voters, conducted by Talk Business & Politics-Hendrix College and released last Thursday, found that 59% of likely voters in Arkansas are in favor of the ballot measure, with just 29% opposed and 13% undecided.

Near the end of its session, the state legislature passed and sent to Newsom’s desk a slew of marijuana-related measures. With great fanfare, the governor signed all of them at once.

In a watershed for the nationwide marijuana industry, one of the bills Newsom signed on Sunday will allow interstate marijuana commerce from California to and from other legal states.

Newson also signed a justice reform measure that requires the courts to process record sealing and other legal remedies for people with cannabis convictions on their records.

Maryland. A majority of Maryland voters say they will support a referendum to legalize marijuana that will appear on the November ballot.

The Goucher College survey, released September 19, described the legalization question that was placed on the ballot by an act of the legislature earlier this year and then asked respondents whether they would vote for or against the measure. 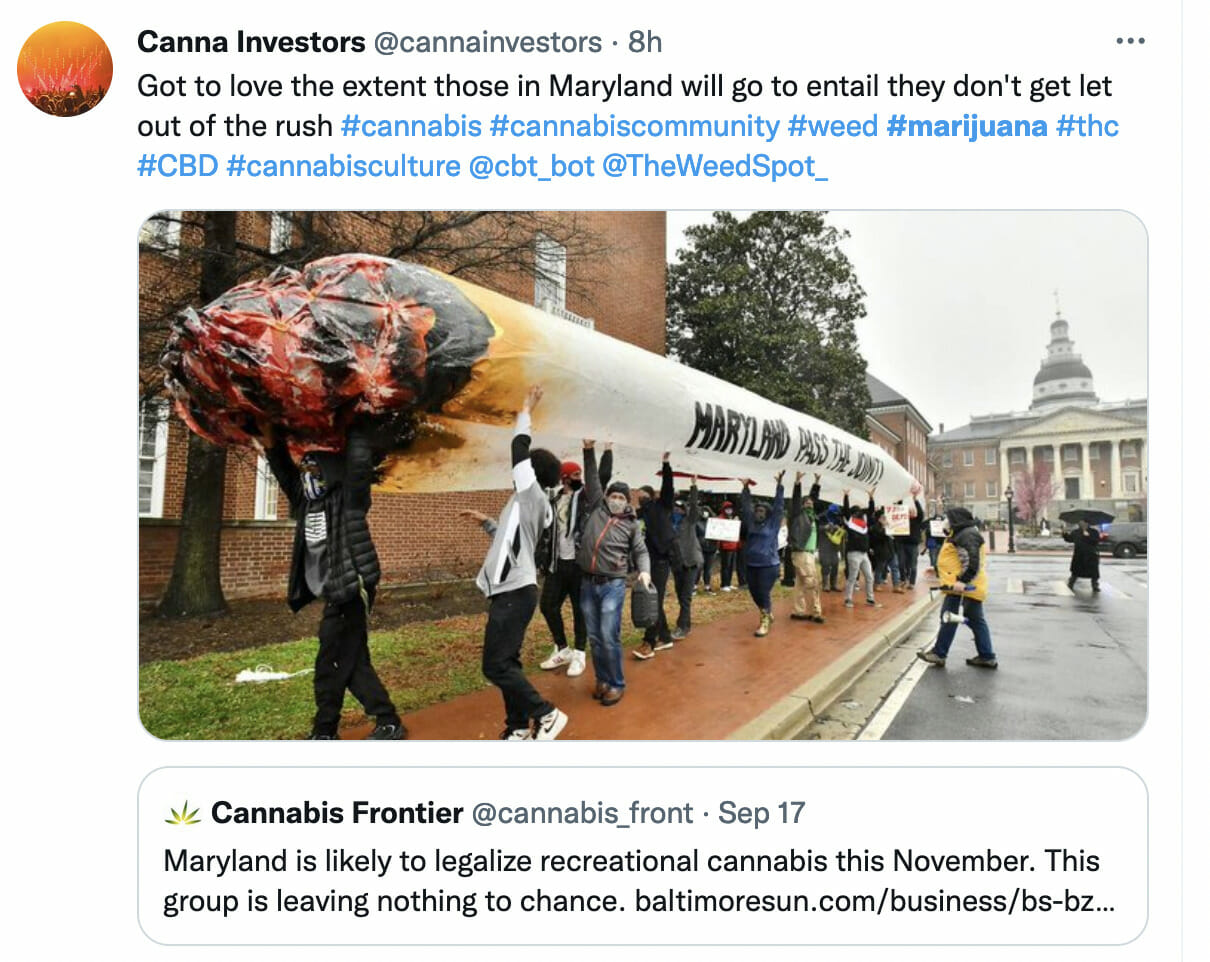 Support was strongest among Democrats (70%) and independents (53%). A majority of Republicans (53%) said they’d vote against legalization at the ballot, and 42% of GOPers said they’d vote to pass it.

Fact is, it’s only a matter of time before marijuana is legalized on the federal level. This seismic event would unleash a tsunami of marijuana profits.

To get ahead of the curve, I urge you to read my new book: The Wide World of Weed and Psychedelics. The product of years of painstaking research, my book is now available for sale. Click here to order your copy.