Prepare for the Next Bull Run, With Both Growth and Value

With the Federal Reserve likely raising interest rates into the new year, and perhaps longer, the stock market will likely remain a volatile place. And while that’s unpleasant in the short term, the investment opportunities created by this difficult period are likely to pay off in the long run.

That’s why in this article, I will review the important aspects of both the growth and value approaches to investing in stocks.

There Is No Growth Without Value

Wall Street’s divided into two broad camps of investing philosophy: growth versus value. Over the years, I’ve learned that the two are just the opposite ends of the investment spectrum.

In my own investments, and in those I recommend in my premium services, Profit Catalyst Alert, and Weekly Cash Machine, I look for that perfect mix of growth and value in order to find winners.

The growth philosophy encompasses companies whose products are seen as creating or capitalizing on emerging secular trends in the world and in turn producing long-term revenue and earnings streams which reward shareholders with extended periods of rising share value.

It’s clear, even to the casual observer, that each of these companies was essentially a trailblazer which capitalized on unmet needs, ranging from the convenience of online shopping with AMZN, to the creation of networking infrastructure with CSCO.

Alphabet and Microsoft essentially plugged into the same dynamic, one via software and the other by creating the world’s largest search engine.

Somewhere in the mix are companies like Apple (NSDQ: AAPL), Dell (NSDQ: DELL) and semiconductor giant Intel (NSDQ: INTC), whose products made the Internet and the exchange of information much more convenient.

Tesla for its part is essentially the next chapter of the technology story, as its electric vehicles essentially extend the fruits of the labor of software, hardware, networking, marketing, and information gathering and dissemination that were laid down by its growth predecessors.

Where growth is sexy, value is seen as stodgy. Growth company execs wear t-shirts and those with hair sport spiky, trendy haircuts. Otherwise, they’re bald, by design or by genetics. They often have closely cropped fashionable beards. They’re movie stars, and they look cool.

Value fund managers, on the other hand, often wear bow ties, horned rim glasses (not the fashionable types) and use arcane metrics such as price/earnings (P/E) ratios to measure the viability of adding a stock to their portfolio. They look for cash on the balance sheet, dividends, and real tangible earnings as well as earnings growth.

So, where growth is about potential profit and the expansion of those profits, value is about tangible profit in the present along with the expectation of stable growth over long periods of time.

Most growth stocks eventually become value stocks as they mature. MSFT and CSCO are now seen more as value stocks than in their early days, as their dividends are reliable.

If there is an upside to bear markets, it’s that they create value. That’s because when share prices fall, buyers get more for their money.

Of course, there is a lot of nuance to be sorted out. Companies whose share prices crash because they are losing money or are in danger of going out of business may seem to be bargains, when in fact, they’re maybe on the way to bankruptcy and may even go out of business altogether.

On the other hand, a high-flying growth company whose earnings and revenue momentum slows, but remains viable, is often a source of value.

Tesla, Amazon, and the go-go sexy growth companies gather all the headlines. But Texas Instruments (NSDQ: TXN) is still a growth company, whose shares are trading closer to value ranges at the moment.

TXN makes a wide variety of digital and analog semiconductors which power, regulate, and connect just about everything from the media equipment in automobiles to the inner workings of “low tech” (until you look inside) toasters.

I have owned shares of TXN multiple times in the past several years and have usually come out with more money than I started. I currently don’t own their shares, and this article is not a recommendation to do so. But TXN, in my opinion, is the classic example of a value stock which has huge growth potential.

Let’s compare it to TSLA, the market’s growth darling

The comparison is stark. TSLA is a growth behemoth compared to Texas Instruments, which is a dividend giant which offers growth potential at a value price. The difference in P/E ratios is wide, as are the growth rates in earnings, sales, and revenues. The balance sheets are surprisingly equitable.

Of course, management styles are completely different with TXN’s conservative approach being in distinct contrast to the bombastic Elon Musk.

A look at Tesla’s price chart shows a prototype growth stock which seems to be poised to move decidedly higher. 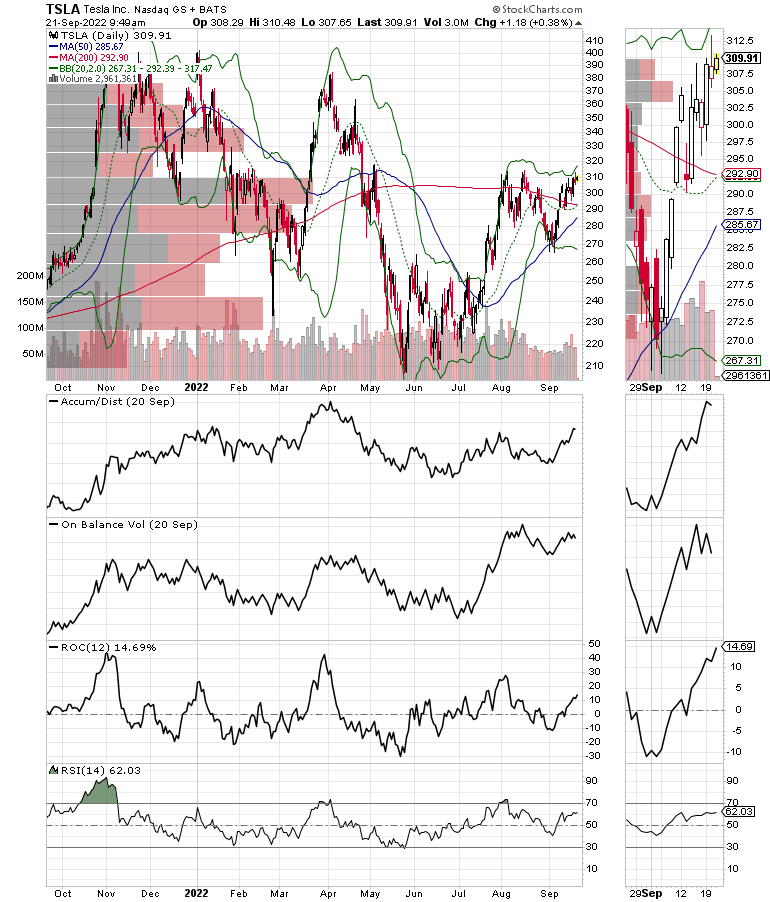 Shares are trading above their 200-day moving average, a bullish sign

The Accumulation Distribution Indicator (ADI) is rising, a sign that short sellers are not active

On Balance Volume (OBV) is steady, a sign that buyers are not selling their shares and

The price chart for Texas Instruments, at first glance, may not seem that attractive. But closer inspection highlights that its ADI and OBV are very similar to what we see in TSLA. That means that short sellers are out of this stock and that buyers are slowly nibbling at the shares. 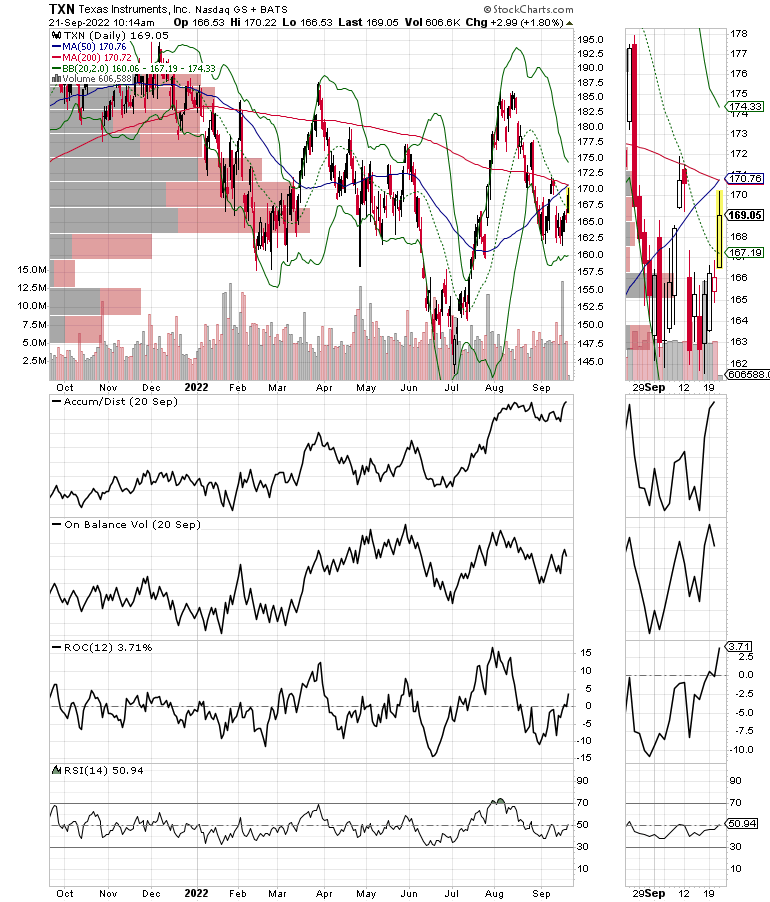 Moreover, TXN is nearing the top range of a large resistance area highlighted by three very large VBP bars and its 200-day moving average. Odds are that once TXN can clear $175, it could also move decidedly higher.

Tesla is a prototype growth company for which investors are wiling to pay a huge premium (92 times earnings). Texas Instruments is a stodgy, well run, company which pays a reliable dividend and usually delivers the goods when it comes to revenues and earnings.

From a traditional standpoint, TXN is a clear value play with growth potential. Tesla, on the other hand is a perfect example of a growth company in the early to middle stages of what could be a long-term sweet spot.

The most encouraging characteristic shared by both, however, is the bullish accumulation pattern as exhibited by both ADI and OBV.

When the bear market is over, I suspect both stocks will enter excellent long-term uptrends. In the short term, a tradable rally would not be out of the question for either stock.

Indeed, there is no growth without value.

Editor’s Note: Want to reduce risks, without sacrificing performance? Turn to our colleague Jim Fink, chief investment strategist of Velocity Trader. A renowned options trader, Jim has developed a proprietary investing method that consistently beats Wall Street in markets that are going up, down or sideways.