Is it Time to Start Boarding the ARKK?

Last week’s 75 basis point rate hike by the Fed should have come as no surprise to anyone on Wall Street. Especially after the previous week’s hot inflation report for August, which did surprise a lot of people on Wall Street.

All of the major stock market indices hit the skids after Fed Chair Jerome Powell delivered his prepared remarks last Wednesday. As Powell bluntly stated, “my colleagues and I are strongly committed to bringing inflation back down to our 2% goal.”

To accomplish that objective, the Fed is driving up interest rates to suppress consumer demand. Higher interest rates mean higher borrowing costs to purchase homes, cars, and other big-ticket items.

Most companies use debt to finance growth so their borrowing costs will go up, too. In turn, they pass those higher borrowing costs onto consumers by raising prices. It’s a vicious cycle that Powell estimates will not be over until sometime in 2024.

The surge in inflation and a commensurate rise in interest rates has been particularly hard on tech stocks. Since inflation began spiking a year ago, the tech-heavy NASDAQ Composite Index has lost more than a quarter of its value.

But now that tech stocks are so cheap, I’m beginning to wonder at what point they may become oversold and ripe for a rebound. After all, technology never goes out of fashion. Inflation comes and goes, but technology will be with us forever.

What I’m about to say next may surprise my longtime readers. A year ago, I excoriated mutual fund manager Cathie Wood for being smug and self-serving in her adoration for tech stocks.

I noted that her ARK Innovation ETF (ARKK) is “defiantly undiversified.” I also observed that rising interest rates “present a valuation problem for all of the ARK funds.”

Since then, ARKK has gotten clobbered by the stock market. After peaking above $125 last November, ARKK is now trading below $40. 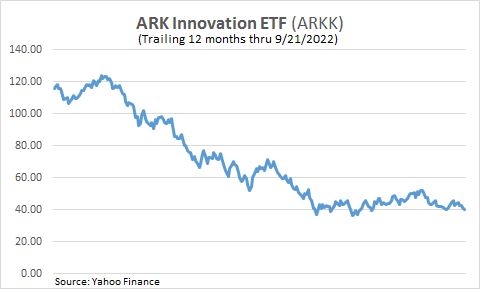 That’s a 70% loss in just ten months, which is nearly triple the decline in the NASDAQ Composite Index over the same span. Even worse, ARKK is now worth no more than it was five years ago.

To my contrarian way of thinking, I can’t help but wonder if ARKK is now worth buying. The same high-octane stocks that gutted its performance this year could send it rocketing higher next year.

The fund’s top holding is Tesla (NSDQ: TSLA), which comprises nearly 11% of the fund’s assets. Zoom Video Communications (NSDQ: ZM) is the second-largest holding at 8% of assets.

To be sure, both of those stocks became grossly overvalued during the stock market’s unlikely surge in the wake of the coronavirus pandemic. But now that they are trading at more reasonable valuations, they may be worth owning.

The same is true for ARKK’s other holdings, most of which are leaders in their respective industries. Within the fund’s top 10 holdings you will find companies involved in blockchain, gene editing, and renewable energy.

Out of the Doghouse

To be clear, my opinion of Cathie Wood has not changed. However, I now find her single-minded devotion to innovation to be an asset instead of a liability.

Sooner or later, inflation will start to subside and the Fed will stop raising interest rates. And when that happens, Wall Street will let tech stocks out of the doghouse.

If you really want to bet on a big rebound in tech, consider buying a call option on ARKK. A call option increases in value when the price of the underlying security goes up.

Last week while ARKK was near $40, the call option that expires in January 2025 at that strike price could be bought for $14. For that trade to be profitable, ARKK must rise above $54 within the next 17 months.

That may seem optimistic until you consider just how far ARKK has fallen. It last traded above $54 just five months ago. Anything more than that is pure profit, and there could be a lot of that if inflation starts to slow down next year.

Dr. Leeb’s in-depth research has pinpointed a handful of all-American technology underdogs that are on the verge of becoming titans of their respective markets. And investors who follow his instructions could soon see themselves sitting on more cash than they can shake a stick at. Click here for details.