The Fed’s Whipsawing of Investors, Explained

Below, I’ll steer you toward an investment method that reaps profits regardless of Fed policy or Powell’s pronouncements. But first, let’s parse Powell’s latest remarks and see what they mean for your portfolio.

Powell’s semantics on Wednesday prompted some head-scratching. Case in point: Powell said that to fight inflation, the central bank will need to bring the funds rate to a “restrictive” level, but he twice qualified the word (“sufficiently restrictive” and “meaningfully restrictive”) and then added: “We’re at the very lowest level of what is restrictive.” Got all that?

Sure enough, on Wednesday, markets bounced like a yo-yo between red and green while Powell spoke, before closing deeply in the red. The CBOE Volatility Index (VIX), also known as the “fear index,” has risen past 29, well in excess of its longer-term average of about 20.

Powell has shown a tendency to tank the stock market, by speaking off the cuff. It’s almost enough to make an investor miss the laconic Alan Greenspan. The following tweet sums up the frustration of many market observers: 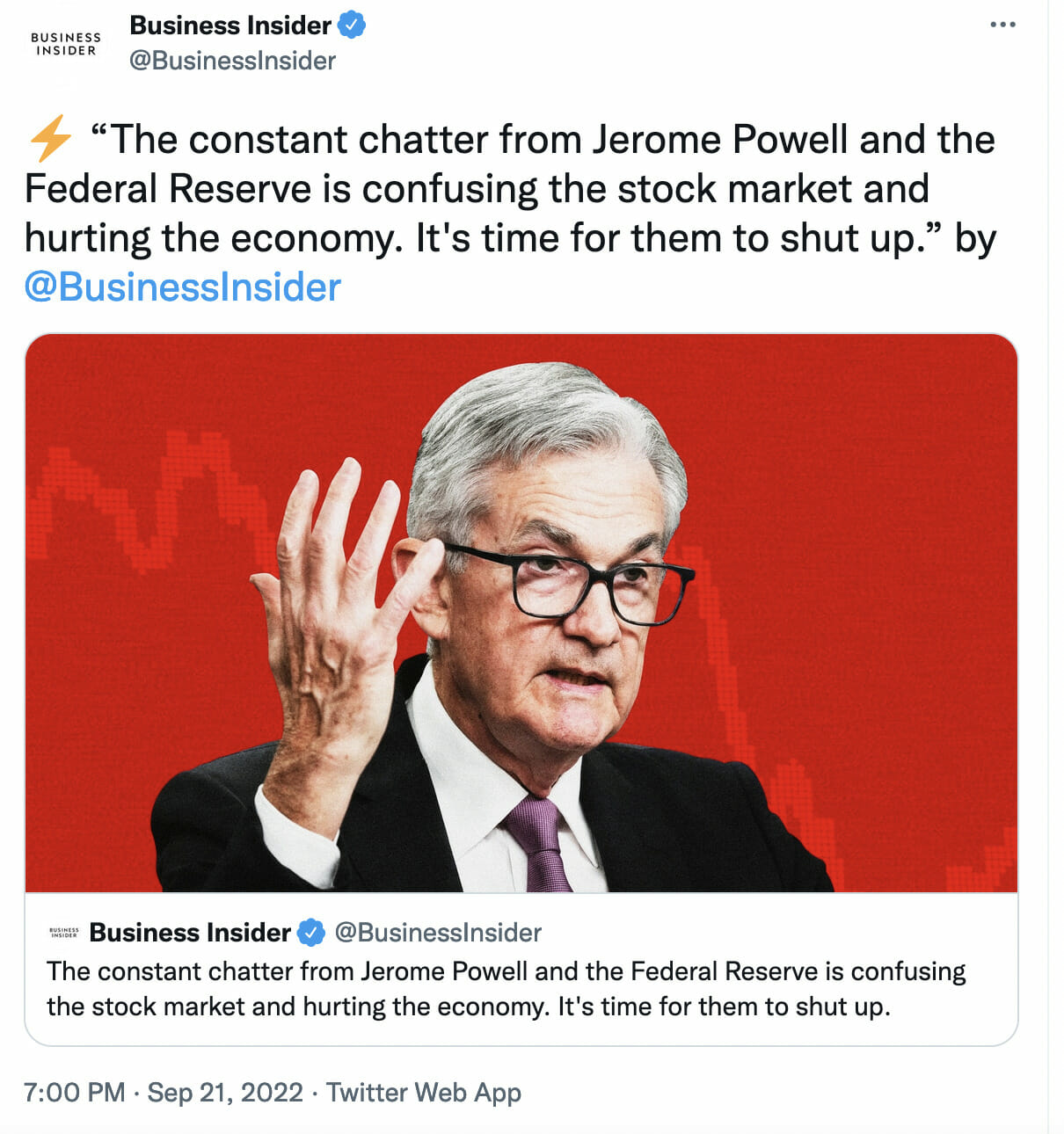 Small wonder that U.S. stocks have lost their footing. Investors in recent days have flocked to defensive sectors such as utilities, health care, and consumer staples. You’d be wise to increase your exposure to these defensive havens.

Small-cap stocks, which are sensitive to economic cycles, have taken a beating as the odds of a recession have increased. Tech stocks also have gotten clobbered. Growth stocks and rising rates don’t play well together.

Here’s the clear upshot of Powell’s message: You should expect additional 1.25 percentage points’ worth of rate increases this year, which would bring the Fed funds rate to 4.4% by the end of 2022, and 4.6% next year. Amid rising rates and a looming recession, it’s likely that stock market volatility will continue into 2023.

Investors are suffering through a bear market that may be heading for a “double bottom,” but if you take a longer-term view, there’s reason for optimism. The jobs market, consumer spending, and corporate earnings have remained resilient.

Corporate profit growth is particularly encouraging. Stock prices, after all, represent projected future earnings growth. S&P 500 earnings are expected to keep rising at a solid pace for the rest of this year and well into 2023, despite the Fed’s removal of liquidity from the market.

Consumers are sitting on ample household savings and, in defiance of inflation and higher rates, still show a propensity to spend. Holiday retail spending is projected to be healthy.

What’s more, we’re seeing signs that maybe we’ve witnessed the worst of inflation. Powell intimated as much on Wednesday, when he punctuated his hawkish commentary with the dovish observations that commodity prices have probably peaked and supply chains are healing.

The S&P 500’s decline this year seems to have priced in most of the bad news, unless a black swan emerges overseas.

Russian President Vladimir Putin this week threatened the world with nuclear weapons, and even though he’s probably bluffing, the Russia-Ukraine war remains a worrisome variable.

World leaders spoke at the United Nations this week and widely condemned Russia’s invasion. Putin is losing the war and he’s cornered, which makes him particularly dangerous. Even his allies China and India are backing away from him.

Public protests against the war are arising in Russian cities, which is remarkable considering the regime’s brutal stance toward dissent. Putin has called up 300,000 reservists, which has prompted thousands of Russian men to buy one-way plane tickets out of the country. (“How to leave Russia” has become a top Google trend.)

The good news is that Europe is successfully weaning itself away from its heavy dependence on Russian oil and gas. And as I noted in a previous article, the second-quarter earnings performance of European-based companies has been surprisingly robust.

As the U.S. economy sags under the weight of higher rates, the Fed will eventually find the opportunity to ease up on tightening, although that won’t happen until 2023. For this year, the hoped-for dovish pivot is dead.

In the meantime, if you want to reduce risks without sacrificing performance, I suggest you turn to my colleague Jim Fink, chief investment strategist of Velocity Trader.

Jim has developed a proprietary investing method that consistently beats Wall Street in markets that are going up, down or sideways.

In a new Investing Daily video, Jim Fink reveals how he hit 626 winners in 647 closed trades. Jim’s unshakable strategy works no matter what the Fed does, or Jerome Powell says. Click here for details.