If I were a shrink analyzing Wall Street’s collective state of mind right now, here’s the term I would use:

Cognitive dissonance (noun), the state of having inconsistent thoughts, beliefs, or attitudes, especially as relating to behavioral decisions and attitude change.

Cognitive dissonance causes stress and anxiety. Stocks so far this week have struggled to find footing in volatile trading, as investors try to decipher the good news/bad news scenario. The Federal Reserve is aggressively hawkish and the yield curve is inverted, and yet recent economic data continue to convey positives.

Therein lies opportunity. Equities that have been on your wish list but seemed far too expensive are now more attractively valued. The dilemma, of course, is that stocks might have further to fall and bargain hunting could become a matter of trying to catch a falling knife. Hence the cognitive dissonance on Wall Street.

That said, a convincing bullish case is emerging that the stock market is oversold and now’s the time to pick up beaten-down stocks that are poised to thrive over the long term as soon as current headwinds dissipate.

This reasoning especially applies to large-cap tech stocks that are positioned to dominate the megatrends of the future (e.g., robotics, 5G wireless, the cloud, gene editing, collaborative work platforms, artificial intelligence, renewable energy, and the Internet of Things).

If you thought the “story stocks” of Silicon Valley were too expensive, now’s your chance to get them into your portfolio. Even if some of them have further to fall, you’d be entering at an attractive price point, as long as you’re a patient long-term investor.

From summer sizzle, to autumn fizzle…

During the summer rally, the consensus on Wall Street was that the bear market had bottomed out in June. That consensus was shattered when stocks recently retested those lows.

And yet, there’s an undercurrent of optimism as cyclical sectors such as consumer discretionary and technology actually start to show traction.

Is the market on the cusp of stabilizing? One positive is the “double bottom” chart pattern that stocks seem to have carved out. A double bottom describes the drop of a stock or index, a rebound, another drop to the same or similar level as the original drop, and finally another rebound.

Yields have risen to their highest levels in more than a decade, in the wake of the Fed’s announcement last week to keep rates higher for longer. You could argue that revised expectations of Fed actions, whereby investors abandoned hope of a dovish pivot this year, have now been priced into stocks. The “Powell shock,” caused by the Fed chief’s harsh commentary last week, could start to wane.

Regardless, volatility is here to stay. On Wednesday, in choppy trading, the major U.S. stock market indices closed higher as follows: the Dow Jones Industrial Average +1.88%; the S&P 500 +1.97%; the tech-heavy NASDAQ +2.05%; and the small-cap Russell 2000 +3.17%. Previously, the Dow and S&P 500 had been down for six consecutive sessions. The benchmark 10-year Treasury yield dipped to 3.73%, which gave stocks a breather.

The catalyst for Wednesday’s rebound was an announcement from the Bank of England (BoE) that it would buy long-dated British bonds, in a move to restore calm to global markets that have been spooked by the head-scratching economic policy of the new government at 10 Downing Street.

WATCH THIS VIDEO: Reasons for Investor Optimism (No, Really!)

Despite monetary policy headwinds, we got further good news on the U.S. economy this week, with the latest reading of the Consumer Confidence Index.

The Conference Board reported Tuesday that U.S. consumers grew more confident for the second month in a row, as gasoline prices plunged. The consumer confidence index rose to 108 in September, from 103.6 in August (see chart). 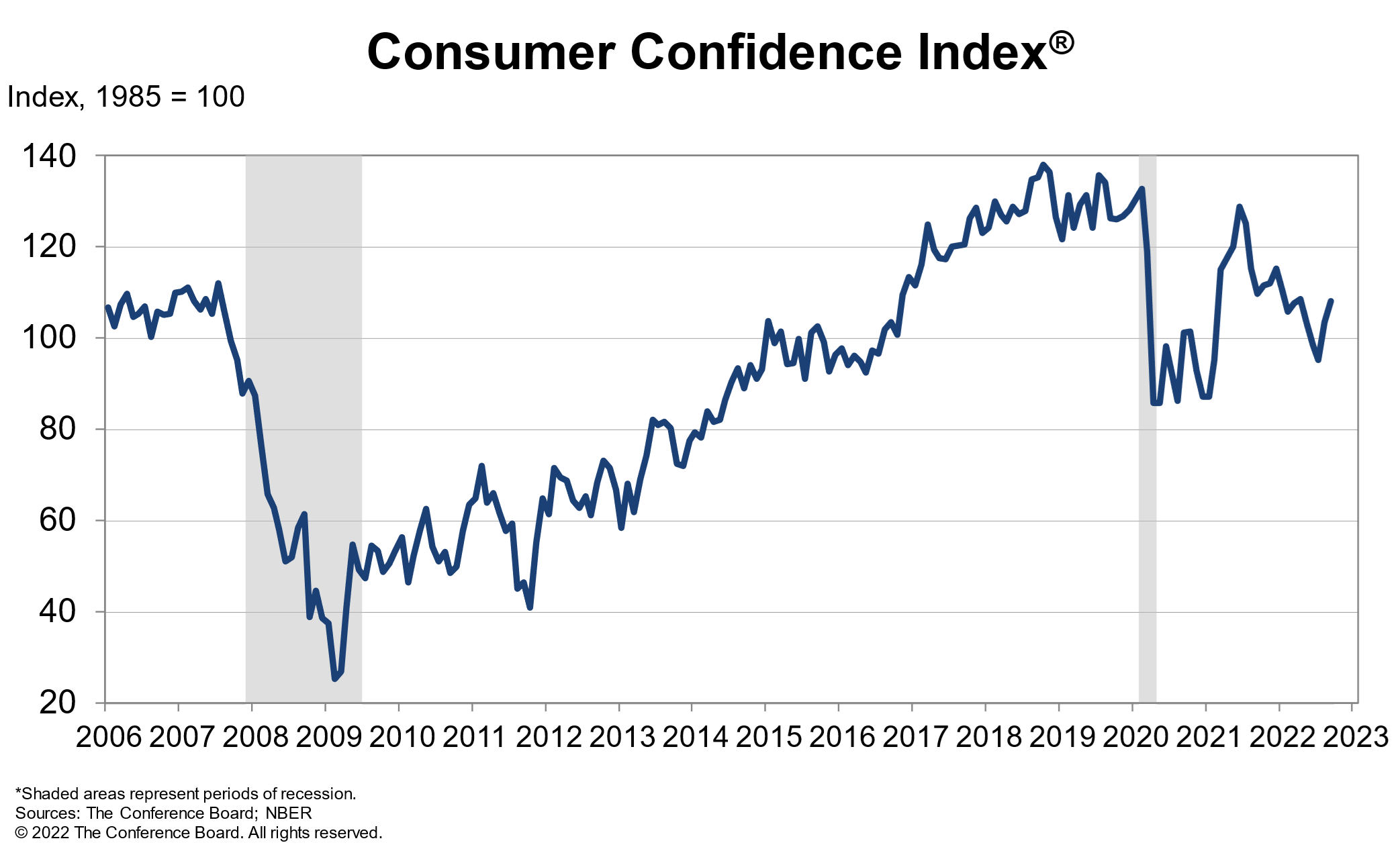 In a separate report Tuesday, the U.S. Census Bureau reported that August’s “core” durable goods orders (excluding defense and aircraft orders) rose by a robust 1.3% versus the previous month, signaling that business investment in equipment remains resilient despite monetary tightening.

To be sure, aggregate demand in durable goods orders is slowing, but it’s easing from elevated levels. The positive core reading means businesses still find it advantageous to invest ahead of what they expect to be a wider economic expansion.

The upshot is that although economic growth is slowing, a deep recession doesn’t appear to be in the cards. However, with war raging in Ukraine, neo-fascism on the rise in western democracies (e.g., Italy), and bitterly fought midterm elections looming in the U.S., investor anxiety won’t abate anytime soon. Stay invested, but buckle up.

Do you seek stable, reliable income, but you’re tired of settling for paltry yields? Turn to my colleague Robert Rapier, chief investment strategist of our new premium product, Income Forecaster.

As our income expert, Robert has devised a new investment formula that could hand you the retirement freedom you’ve always dreamed of, even in these tumultuous times.