Why The Bear Market May Be Over Sooner Rather Than Later

As frustrating as the past 10 months have been for stock investors, the price trend has actually been following a long-standing and often ignored Wall Street trading pattern known as the Presidential Cycle. Under this pattern, the four-year electoral calendar often influences the dominant price trend in the stock market.

If I’m right in reading the history of the cycle, this bear market may be closer to being over than many expect.

Spoiler alert: It has to do with the Federal Reserve.

Generally speaking, stock prices rise in years three and four of the election cycle with year three being traditionally the biggest gainer. Moreover, prices tend to rise more slowly or fall during years one and year two, while year four most often follows the trend set in year three, although the gains are traditionally not as impressive.

WATCH THIS VIDEO: Preparing For The Post-Bear Bounce

The most popular explanation is that the Fed tends to tighten monetary policy in the first two years of the cycle to slow inflation. No one really knows why that is, although given that they tend to lower rates in the previous two years, there is some sense in that explanation.

Cynics often note that the Fed may ease in years three and four to give the incumbent president a better chance for re-election.

If the cynics are right, their expectations don’t always work out. Consider the fate of presidents Carter, Bush I, and Trump who were one-termers. In Trump’s case, especially, the Fed eased aggressively in his fourth year, albeit due to the COVID pandemic, and he still didn’t get elected.

According to data compiled by Charles Schwab researcher Lee Bohl, the average performance for the S&P 500 (SPX) during the Presidential Cycle from 1933 to 2015 was as follows:

Note the relatively subdued returns in years one, two, and four in comparison to year three. Note also that year four tends to follow what happens in year three.

Two representative presidential terms which held up as described above are Clinton’s first term, chart directly below, and Trumps only term, chart further below. All the price charts are courtesy of Stockcharts.com. 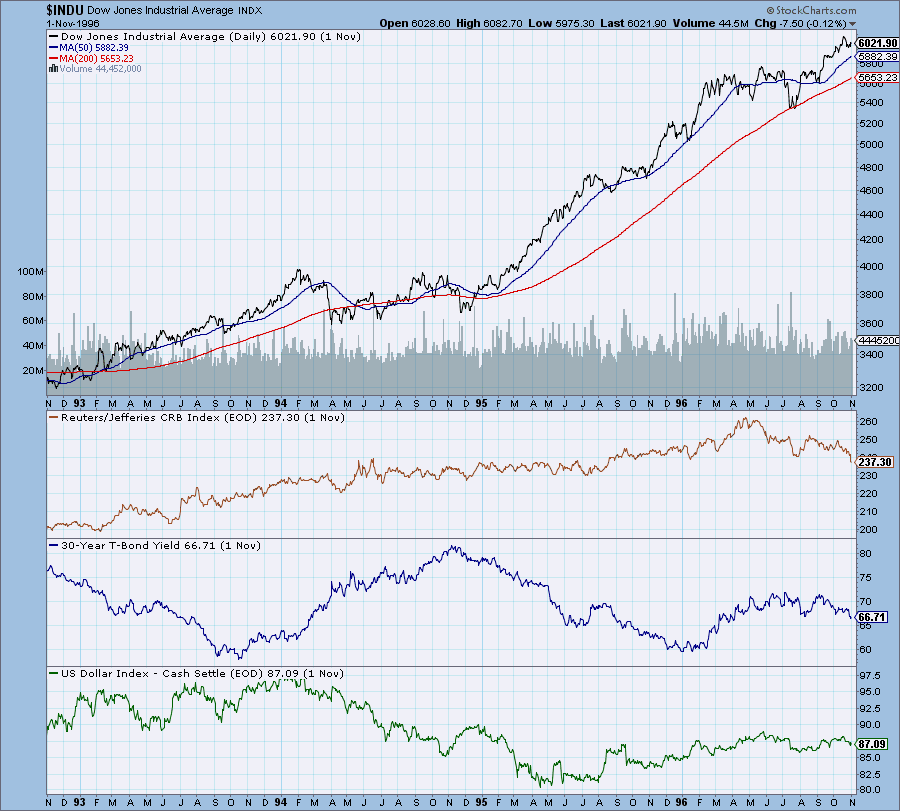 The Fed raised interest rates seven times in Clinton’s year 2, 1994, starting in February and into January 1995. In July 1995, they delivered the first of three interest rate decreases over the next 12 months.

Read This Story: Four Signs That The Next Bull Is Dawning

Stocks began to rally once the Fed made it clear that its January 1995 rate increase would be its last one for the move.

The Fed raised interest rates seven times during Donald Trump’s first two years in office starting in December 2018 and carrying through until December 2019. In July 2019, the Fed began to cut interest rates and added Qualitative Easing (QE) in response to the COVID pandemic. 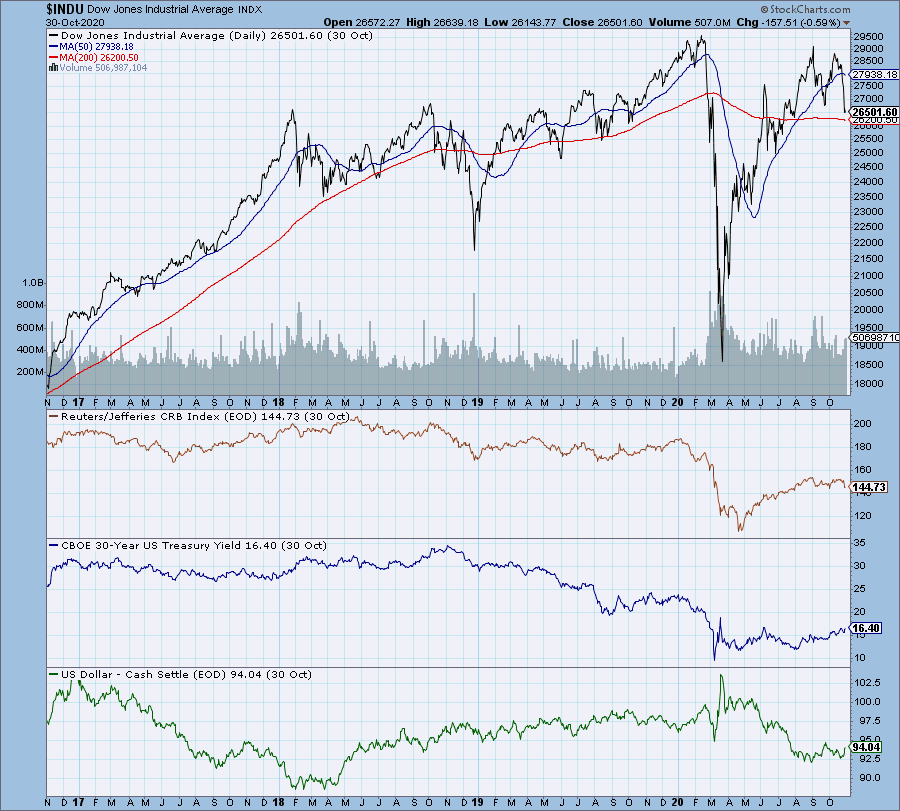 Despite the pandemic, the cycle was reliable and the net effect on stock prices was similar. Once the Fed made it clear that it would stop raising interest rates, the stock market began to rally.

We are presently in the last quarter of President Biden’s first two years in office. The Federal Reserve is certainly following the script by raising rates. What makes this cycle different, however, is the amount of inflation in the system and the aggressiveness of the Fed’s rate hikes, with multiple 0.75% increases. In the past, 0.25 and 0.5% increases were more of the norm. 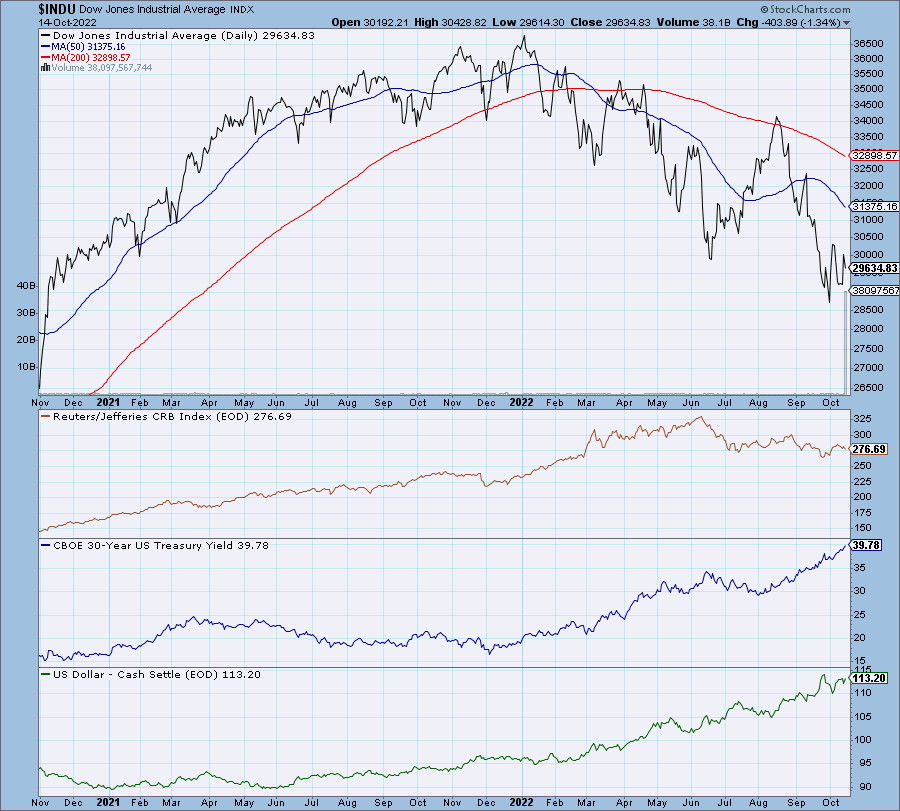 You can appreciate the extraordinary rise in bond yields, the dollar and commodity prices. As a result, the declines in stock prices have been equally impressive.

What’s most notable about this version of the cycle is how closely correlated the asset class prices have been in comparison to the past. Note how the dollar’s rise has marched in lockstep with rising commodity prices and rising bond yields. On the other side, note the highly correlated drop in stock prices as the other three have risen.

The reason for this tight correlation is simple. The Fed has been raising interest rates aggressively during year two of Biden’s term. Moreover, unlike in past cycles, artificial intelligence-directed traders (algos) know how the cycle operates and they trade all markets simultaneously.

This is important because the algos are the biggest influence on prices in the financial markets. In addition, they respond to news at the speed of light, which means trends can reverse almost immediately after important events.

But here is why I think we’re closer to the end of this bear market than many people realize. Unless something changes in the way the world operates, the Fed will eventually reverse course and lower interest rates, as we get closer to year three.

And when the Fed does, if history is a guide, stock prices will likely rebound. Moreover, just as the decline has been extraordinary, so will the rebound likely be spectacular because of the presence of the algos in the market.

All presidents face economic issues. Clinton’s challenge was to revive the U.S. economy after the Bush recession. Trump’s goal was to reduce regulations and the reversal of globalization. Sometimes events, such as COVID, exaggerate the magnitude of policy decisions.

And while all presidents do what they can to achieve their goals via policy and the use of the bully pulpit, the biggest influence on stock prices, and the constant component of the Presidential Cycle, remains the actions of the Federal Reserve.

In addition, it’s the interaction between what presidents say and do and how the Fed runs its business that eventually leads to market reactions and outcomes.

Clinton balanced the U.S budget and juiced the Internet bubble, which enhanced productivity and reduced inflation. The Fed, directly or otherwise, rewarded him with low interest rates.

Trump jawboned the Fed incessantly into lowering interest rates all throughout his term. And the Fed hammered him by raising rates for an extended period of time. The Fed reluctantly acquiesced especially after their late 2018 policy blunder where they raised interest rates too rapidly and more aggressively than the stock market could handle. Of course, the pandemic also forced their hand.

Regardless of why or how, both presidents and the stock market benefited from the Fed reversing course in year three.

Currently, despite the exaggerated nature of price moves, the Presidential Cycle is operating normally with year two delivering a hammer stroke to the stock market as the Fed ratchets interest rates higher.

You can thank the algos for the extra fiddle-faddle. Also note that President Biden never speaks ill of the Federal Reserve.

Certainly, there are no guarantees that the Fed will reverse course anytime soon. But we are now closer to a Fed reversal than many expect. All of which is why I’m thinking that when that moment arrives, the ensuing rally in stocks will likely be something to watch, and worthy of trading.

And yes, you can thank the algos for that as well.

Editor’s Note: Our colleague, Dr. Joe Duarte, has devised a simple, groundbreaking technique for making money…and it works in bull or bear markets, in economic expansions or contractions, and no matter which party occupies the White House.

You’ll be able to set yourself up for a shot at pocketing steady income, week after week, with Dr. Duarte’s “instant cash codes.” To learn more, click here.