Rattled By The Headlines? Take The Long View

Despite an occasional rally that temporarily raises hopes, this miserable bear market grinds on. Stocks took it on the chin last week, and in coming days, economic reports with the power to sharply move markets await on the docket.

And of course, Tuesday features the midterm elections. Yikes.

Polls indicate the GOP is gaining on the Democrats, but in this wild political environment, anything can happen. If Republicans win complete control of Congress, we’ll probably see intensified acrimony on Capitol Hill, the likes of which America hasn’t witnessed since the 1850s when our nation was hurtling toward Civil War. If you’ve been following the rise of violent extremism, you know that I’m not being hyperbolic.

But remain calm. As 2022 winds to a close, we’re probably nearing the end of the Federal Reserve’s interest rate tightening cycle. Since 1980, in the 12 months after the final Fed rate hike, the S&P 500 was up on average about 15%.

And if Tuesday’s midterms bring political gridlock…well, Wall Street usually prefers a Congress that gets nothing done, as opposed to legislative activism that could cost investors money.

Are you rattled by the daily headlines? Take heart. Below, I’ll steer you toward a growth opportunity that’s poised to actually benefit from Tuesday’s voting. It’s also resistant to recessions and rising rates.

Fed Chair Jerome Powell last week succeeded in talking down the markets. Where have we seen this movie before?

The U.S. central bank last week hiked the fed funds rate by 0.75% (75 basis points) at its November Federal Open Market Committee (FOMC) meeting. This move represented the Fed’s fourth consecutive 0.75% hike, which lifts the fed funds rate from near zero to 4.0% in about eight months, historically the fastest pace of rate hikes in the U.S.

The FOMC’s official written statement was rather bland: “The Committee anticipates that ongoing increases in the target range will be appropriate in order to attain a stance of monetary policy that is sufficiently restrictive to return inflation to 2 percent over time.”

The 0.75% hike was widely expected and stocks initially rose on the news. Then afterwards that afternoon, Powell held his press conference and as he spoke, stocks pulled a u-turn and sharply fell. His comments were pointedly hawkish:

“It is very premature to be thinking about pausing. People when they hear ‘lags’ think about a pause. It is very premature, in my view, to think about or be talking about pausing our rate hikes. We have a ways to go. We’ve always said it was going to be difficult, but to the extent rates have to go higher and stay higher for longer it becomes harder to see the path.”

Powell’s tone resembled that of an exasperated father admonishing his recalcitrant children. Investors were dispirited and the major stock market indices closed last week in negative territory, giving back some of the gains of the October rally.

Higher rates and bond yields are taking a particularly heavy toll on the risk-on, growth-oriented segments of the market, such as the tech-heavy NASDAQ (see chart). 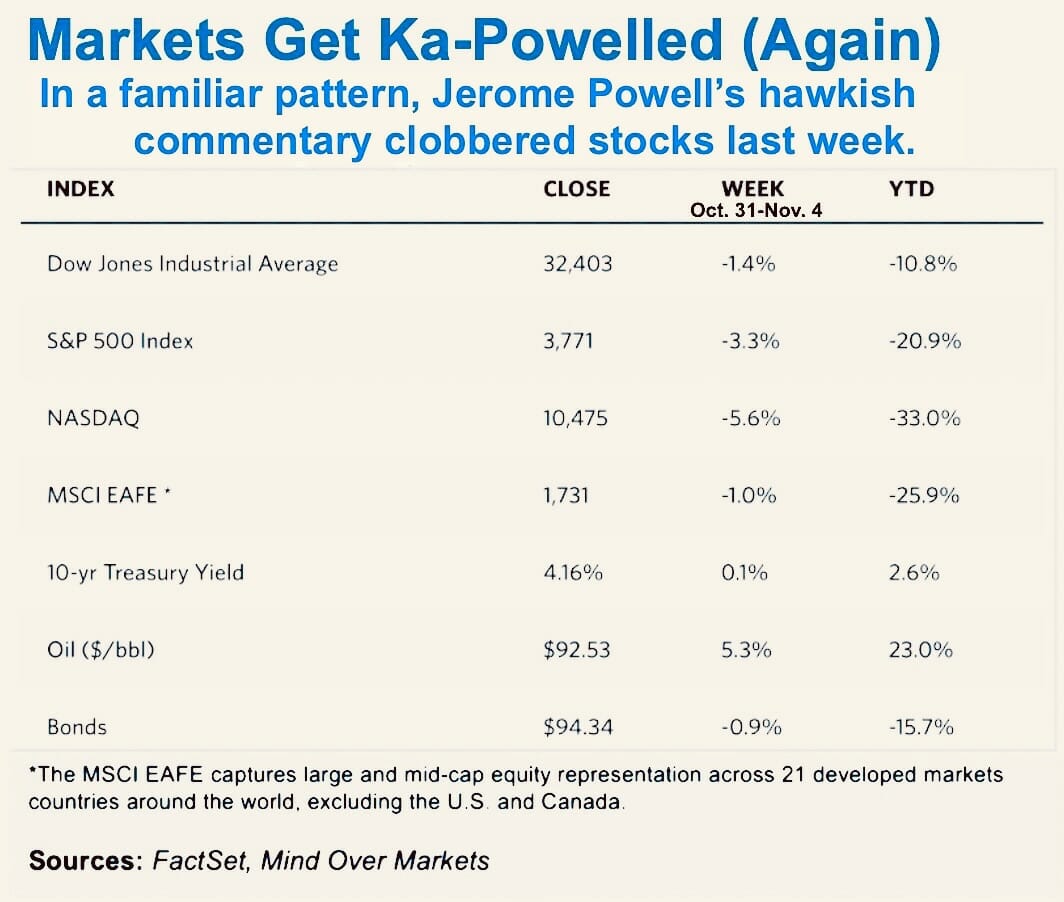 We got mixed news on the jobs front last week. The U.S. Bureau of Labor Statistics reported last Friday that the labor market remains strong. Nonfarm-payroll jobs for the month of October rose by 261,000, above expectations of an increase of 200,000. The unemployment rate edged higher to 3.7%, up from 3.5%, as labor-force participation moved lower, from 62.3% to 62.2%.

Wage gains remained elevated at 4.7% year-over-year, in line with estimates but below last month’s 5.0% gains. On a monthly basis, wage gains rose by 0.40%, which surpassed expectations of 0.30%. These wage gains are above pre-pandemic levels, although they’re still outpaced by inflation.

The upshot: the economy continues to show signs of strength, which is good, but robust employment and wage gains are keeping inflation elevated, which strengthens the Fed’s resolve to remain hawkish.

Regardless, we enjoyed a rally last Friday, with stocks extending their gains on Monday. With an eye on the November 8 midterms, investors are cheered by the prospect of divided government. Historically, a Democratic president with a Republican or split Congress has led to above-average gains.

Equity markets are looking for an excuse to rally; maybe this week they’ll get it.

More earnings results are due this week, with 30 S&P 500 companies scheduled to report. Earnings growth has been decelerating, with a few notable misses from bellwether tech stocks, but it remains respectable.

The following economic reports on deck stand out as the most crucial for investors: consumer credit (Monday); consumer price index and initial jobless claims (Thursday); and consumer sentiment and inflation expectations (Friday).

Control of Congress is up for grabs on November 8. A near certain winner in the midterm elections? Marijuana.

On Tuesday, voters in South Dakota, Arkansas, Missouri, North Dakota, and Maryland will consider initiatives to legalize recreational marijuana. Polls show that these initiatives are all popular with voters.

Marijuana has emerged as a consumer staple, as reflected by soaring pot sales this year. That’s why I just launched a brand-new service detailing how you can financially benefit from the legalization of cannabis. Called Marijuana Profit Alert, it’s your guide to making money in these challenging times. Click here to learn more.