Why Energy Stocks May Be Worth Buying on Price Dips

One of the most overused phrases in journalism over the last few months has been “winter is coming.” Aside from the obvious weather reference, the phrase has been used as a metaphor in the context of politics, the stock market, and most often in reference to the energy situation in Europe.

To sum it all up, due to the war in Ukraine and the subsequent and ongoing upheaval in the global financial and commodity markets, the widely held view is that Europe will experience a horrific winter if temperatures are colder than expected. Of course, this should come as no surprise to anyone. It should be common sense that if the Russians cut off Europe’s natural gas supplies, the odds of a historic energy crisis would be well above average.

And yet, oil and natural gas prices are well off of their 2022 highs and traders now worry about oversupply.

That’s because even though journalists often induce head scratching, in the real world, markets are complex systems with built-in adjustability. When Russia cut off Europe, prices initially shot up. But over time, the U.S., Norway, the United Arab Emirates and other gas suppliers and wholesalers stepped up, not on the cheap, and increased liquified natural gas (LNG) shipments to Europe with the net effect being that Europe’s reserves are nearly full in preparation for the winter.

Moreover, in Eastern Europe governments mobilized coal and lumber supplies. Thus, even though the European continent and the UK are not out of the woods (sorry), they may be in better shape than they might have been if the system hadn’t adjusted. 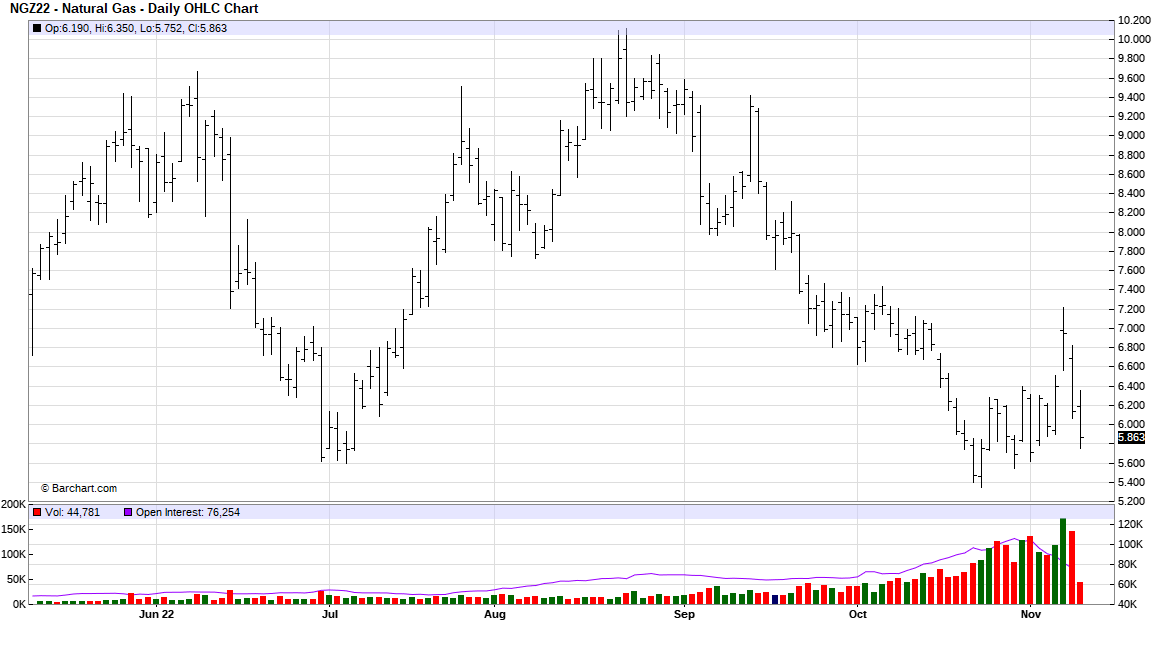 Thus, the net result of the system’s adjustment was a dramatic decline in the price of natural gas (NATGAS), and a spillover effect into the price of crude oil (WTIC), which still persists as illustrated by the respective recent futures price charts (courtesy of Barchart.com). 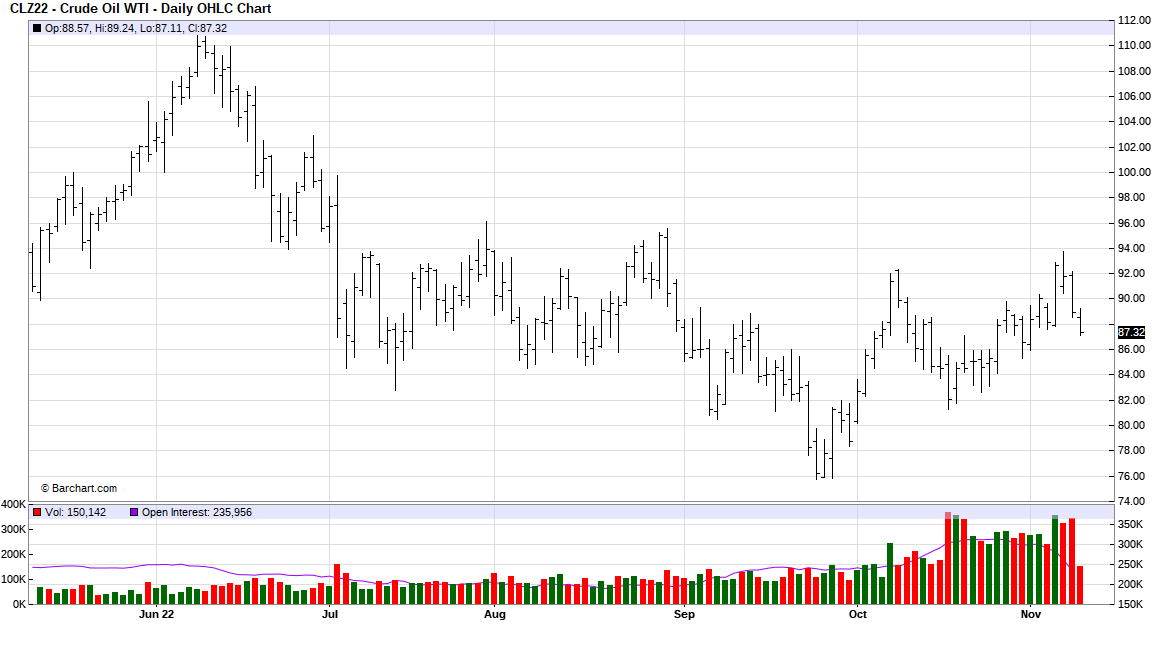 On the other hand, recent data from the U.S. Energy Information Agency (EIA) revealed that the U.S. is in danger of running out of diesel fuel and perhaps gasoline in the near future. Although that is not likely, news items such as these, or news about China and its COVID policies being reversed, often move the markets.

Despite price doldrums in energy futures, the potential for supply issues lurks and could become apparent at some point in the future, such as when the weather turns really cold.

Moreover, the daily news grind is often just window dressing. China is a cauldron of uncertainty as Mr. Xi consolidates his new powers. And the U.S. economy is not falling off the cliff, just yet, although it may do so at any time if the Federal Reserve keeps raising interest rates aggressively.

Newly announced layoffs at tech companies, such as Meta Platforms (NSDQ: META) handing out 11,000 pink slips on 11/9/22, may be just the beginning of a major slowdown.

It’s All About Bottlenecks

While the news leads to short-term market moves, the real problem is one of insufficient infrastructure to manage supply and demand for energy, especially when sudden events require rapid adjustments to supply.

For example, according to recent reports, there is $2 billion worth of LNG sitting on ships just outside Spanish ports waiting to be processed through Spain’s clearly insufficient intake infrastructure. Moreover, inconsistent pipeline access in Europe makes it hard to get the LNG to areas where demand is high.

There also is market chatter that LNG ships in Spain may start to look for other ports, which could complicate the situation further. If that happens, things could get interesting in a hurry, especially if a sudden cold spell develops.

In the United States, there aren’t enough refineries to process diesel and gasoline to meet demand. In addition, regional laws such as those in New England, which limit pipelines, force states such as Massachusetts to import LNG from foreign countries at international prices (think huge overpaying). The preferable alternative would be to get much cheaper natural gas available via pipelines (which are either not in place or not operational) from the natural gas rich Appalachian or Delaware basins.

Gasoline and diesel are running scarce because of limited U.S. refinery capacity, since no new refineries have been built here for decades.

And when you add that new regulations are reducing access to drilling on federal lands while permit delays hinder offshore and private land activity, it’s not hard to see why energy companies are cutting back on their capital spending while maximizing dividends and stock buybacks.

From an investment standpoint, it’s a bit intimidating to plunk down cash into energy stocks that have already had huge moves. But every time investors get cautious, a new up leg in the sector erupts and dip buyers smile big.

This is what is known in stock market vernacular as a momentum market, whereby investors buy high priced stocks because they are going higher. This works for a while, often longer than anyone expects. But it always ends badly.

Remember the dot.com bust? And the housing meltdown in 2008?

By the same token, if you base your decision on valuation, in contrast to the commonly seen momentum market, the energy sector is nowhere near overvalued. That’s because momentum markets often end when valuations range in the price-to-earnings (P/E) territory north of 50 or multiples of 50. That’s assuming the company has any earnings at all.

Here are some recent energy sector P/E ratios to ponder:

Note that among the five listed stocks, only LNG has a P/E above 10, while Italy’s Eni, which has a huge LNG business footprint in Europe, is trading at 3.69 times earnings. Those are unheard of valuations for stocks which are near or above their 52-week highs.

In Wall Street vernacular, these stocks are “‘uge bahgains.” 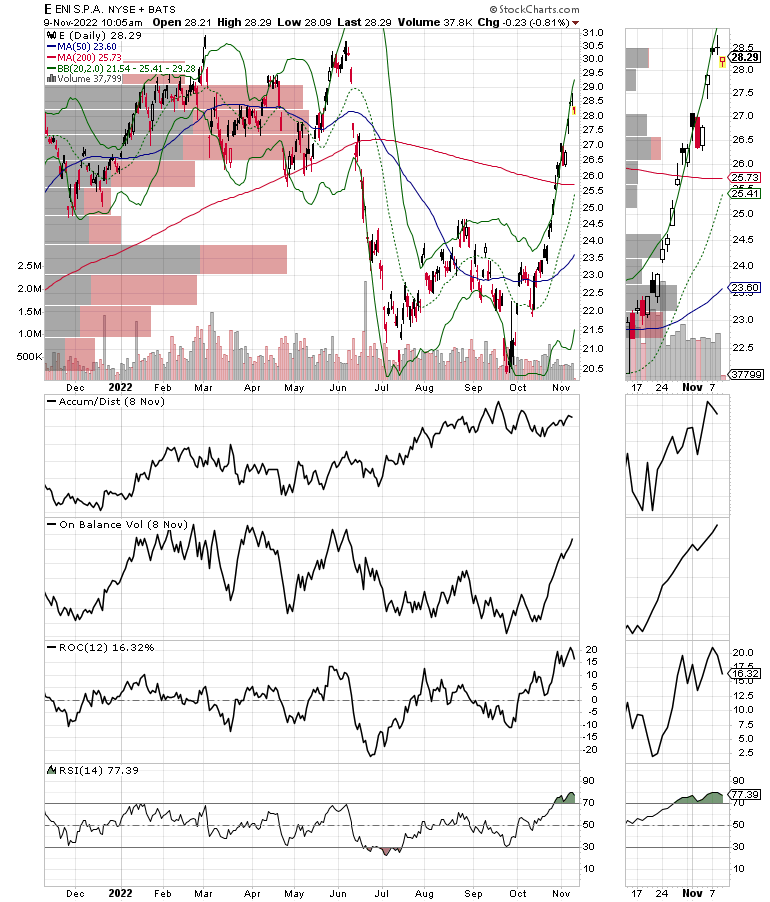 In the case of Eni, you can see the stock is overbought, with a Relative Strength Index (RSI) above 70, while at the same time it’s still under accumulation based on rising the Accumulation Distribution Indicator (ADI) and On Balance Volume (OBV). The former indicator tells us that short sellers are scarce, while the upslope in the latter is a sign that real buyers are moving in.

I expect a consolidation near the $30 area at some point in the future. But I’m not certain that investors won’t be buying any dips in this stock, as well as others in the sector for some time.

So far, they’ve done so on every dip.

What Could Derail the Energy Rally?

Of course, there is always something that could pull the rug out from the energy stocks. A warmer-than-expected winter, a sudden breakout of peace in Ukraine, or the most popular reason being thrown about these days: a global recession.

Certainly, those are all possible causes. But neither warm weather nor a recession will fix the bottlenecks. Even the breakout of peace in the Ukraine may not exert a lasting effect on prices, especially with the destruction that’s taken place and the new agreements that would have to be negotiated with Russia.

More to the point, the global energy sector is years behind the curve in expanding the capacity required to meet demand, even in the face of fossil fuels becoming obsolete one day. That means that the current situation has done little but push the pendulum in the wrong direction further than it was before the Ukraine war.

Yes, renewables are in the works, but grid issues provide another bottleneck and big green companies like General Electric (NYSE: GE) are quietly selling their turbine businesses, while others are adjusting their portfolios. And yes, hydrogen is getting closer. But it requires natural gas as a feedstock to power the process of freeing hydrogen from water. Meanwhile, hydrogen processing plants are taking longer to build, raising costs and delaying delivery.

Nuclear power gets tossed about a lot as well. But no one is hurrying to build new plants and so-called “small, clean” reactors are barely off the drawing board.

Energy stocks are cheap based on their valuations. No one is fixing infrastructure bottlenecks. There are few viable and reliable alternatives to fossil fuels at the moment.

Moreover, history shows that in commodity sectors, the price trend for stocks is often an excellent predictor of how the actual commodity price trend will unfold.

All of which adds up to the possibility that this momentum run will hang around longer than usual. The proof will be whether the dip buyers appear in big numbers once the current up leg consolidates or pulls back.

Finally, I should point out that yes, winter is coming.

Editor’s Note: As with energy, the marijuana sector is a momentum play. And pot stocks just got a big upward catalyst, thanks to the November 8 midterm elections.

Marijuana has emerged as a consumer staple, as reflected by the soaring sales this year for pot. That’s why Investing Daily just launched a brand-new service detailing how you can financially benefit from the legalization of cannabis. Called Marijuana Profit Alert, it’s your guide to making money in these tumultuous times. Click here to learn more.