The stock market has been looking for reasons to rally. Those reasons came on Thursday, in the form of inflation and jobs data.

The U.S. Bureau of Labor Statistics (BLS) Thursday released the Consumer Price Index (CPI) for October, and the numbers were greatly encouraging.

Over the past 12 months, the all-items CPI increased 7.7% in October, compared to the estimate of 7.9%, and the actual 8.2% increase in the year through September. October’s all-items CPI reflects the smallest 12-month increase since the period ending January 2022. Core CPI in October came in at 6.3% over the year, down from 6.6%.

The optimists have been claiming that inflation is peaking, and Thursday’s CPI report vindicates that view. See the following chart: 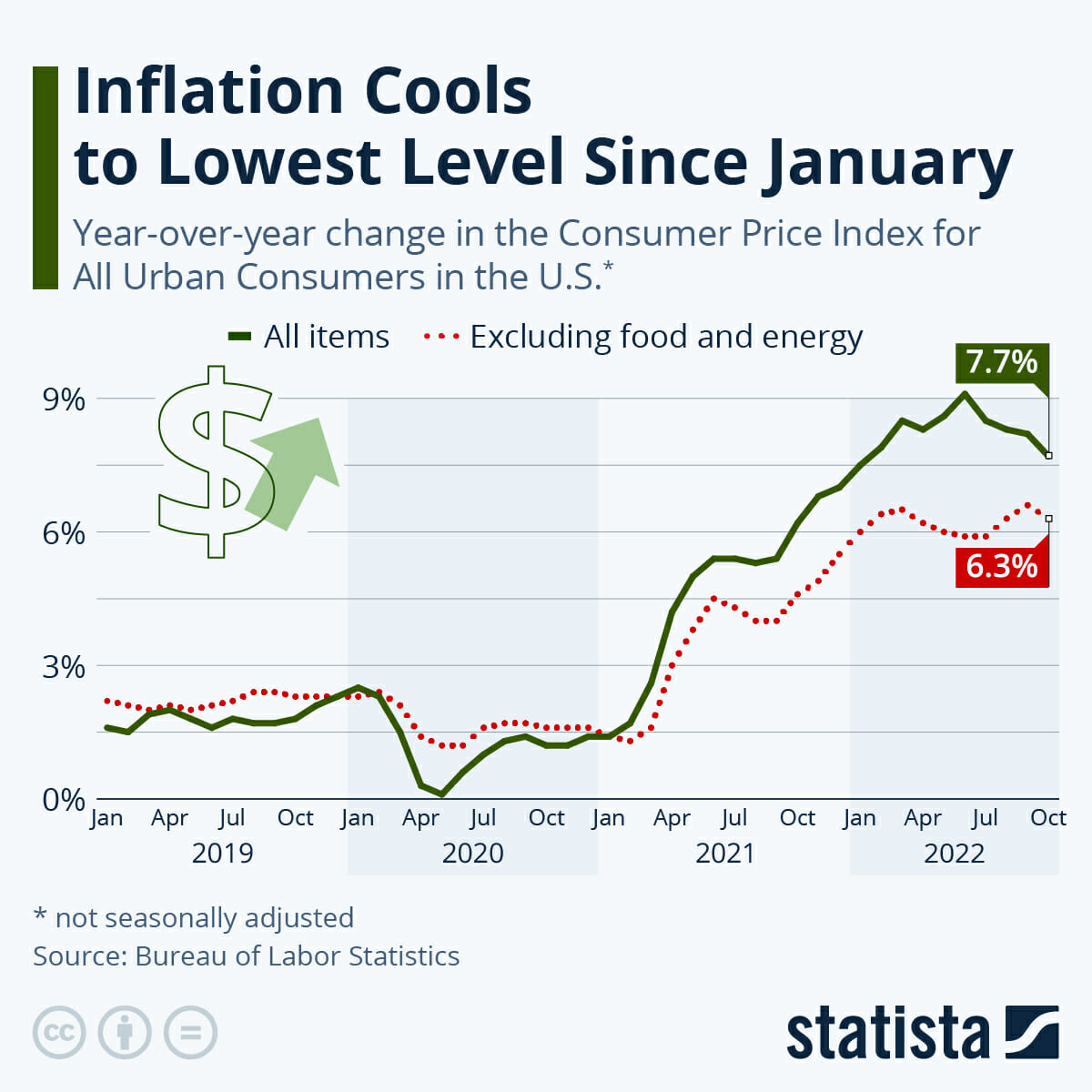 In a separate report, the U.S. Department of Labor reported Thursday that in the week ending November 5, the advance figure for seasonally adjusted initial claims was 225,000 (vs 220,000 expected), an increase of 7,000 from the previous week’s revised level. Jobs growth has slowed, but it still doesn’t reflect recessionary numbers.

The upshot: The Federal Reserve’s tightening is weighing on the economy, and subsequently inflation is cooling. Also taming inflation is the gradual mending of supply chain snafus.

The bear market is losing its ferocity and bullish sentiment is returning, as investors look ahead to a 2023 that features lower inflation and maybe (just maybe) a more dovish Fed.

Thursday’s data would have helped the Democrats in the Tuesday midterm elections, but the incumbent party outperformed in the voting anyway.

Exit polls show that inflation was not a major issue for voters on Tuesday, which allowed the Democrats to dodge an expected “red wave.” Abortion rights, anger over election deniers, and a general dislike of Trump proved stronger motivations. The glaring weaknesses of flawed candidates also kept a lid on the GOP’s electoral performance.

Indeed, inflation is a global problem largely caused by plague and war. More than 180 countries are struggling with inflation right now. The claim that U.S. inflation is caused by reckless federal government spending is, to put it plainly, a falsehood.

Wall Street is betting that inflation will continue to ease and eventually move closer to the Fed’s target of 2% in 2023 (see chart). 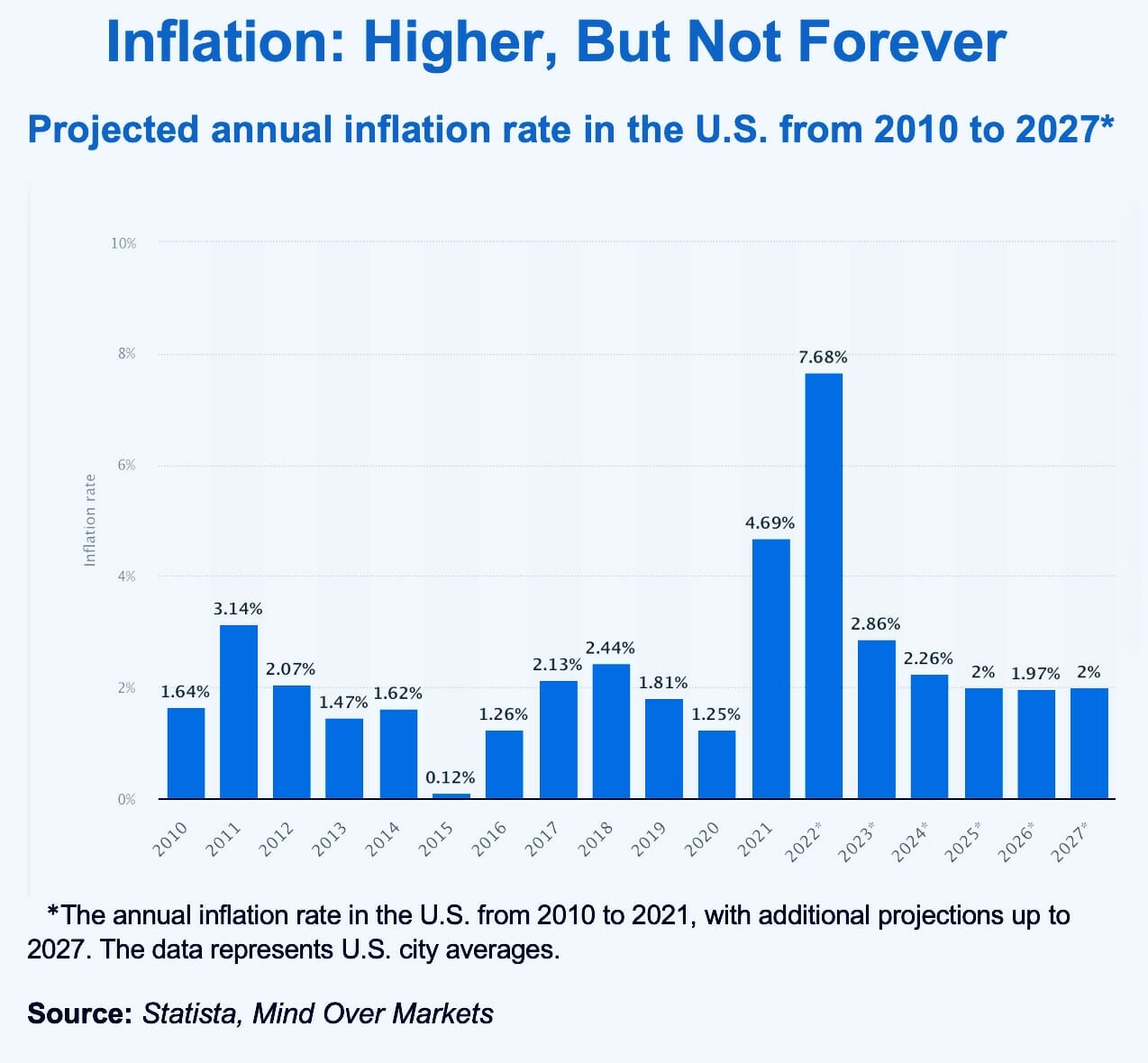 As of this writing, control of the House and Senate remains up in the air. The latest forecasts call for the GOP to take a razor-thin majority in the House and the Democrats to retain control of the Senate, but the votes are still being counted and many races are simply too close to call.

Legislative initiatives in the new Congress next year will have a tough time overcoming gridlock and animosity. But Wall Street often prefers stalemate in Washington, because it leads to unfettered profit making.

Read This Story: Rattled By The Headlines? Take The Long View

Regardless, the softer-than-expected inflation report for October is likely to put the Fed on a path to approve a milder interest-rate increase of 50 basis points at its next meeting in December.

On Thursday, the major U.S. stock market indices soared on the CPI news and closed as follows:

Thursday’s rally marked the sharpest one-day percentage gains for all four indices since the trough of the pandemic in 2020.

Another positive for the stock market is healthy (albeit slowing) corporate earnings growth.

For the third quarter of 2022, the “blended” year-over-year earnings growth rate for the S&P 500 is 2.2%. Blended combines actual with projected results. For calendar year 2022, analysts expect earnings growth of 5.6%. With Christmas looming on the calendar, investors are now starting to talk about a phenomenon that seemed improbable a few weeks ago: a Santa Claus rally.

PS: Despite the ups and downs of the economy this year, marijuana has emerged as a consumer staple, as reflected by robust pot sales this year. That’s why I just launched a brand-new service detailing how you can financially benefit from the legalization of cannabis.