Can The Rebound Last? It’s Up to Powell

The pattern this year has been for the FOMC to meet expectations on interest rate policy, and for the stock market to immediately rise in response. And then, when Powell takes the lectern, his gloomy, confusing, and contradictory remarks gratuitously trigger a sharp u-turn in equities.

Powell, who is in his fifth year of leading the world’s most influential central bank, is presiding over the fastest interest rate increases since his legendary predecessor Paul Volcker.

Powell and his colleagues are haunted by memories of the draconian rate increases from 1979 to 1980 under Volcker that finally tamed 1970s hyper-inflation.

Powell is un-elected, but he’s not a dictator. Fed policy is forged by committee. However, the chair is the central bank’s most powerful and visible policymaker. The chair also tends to be the political lightning rod.

I realize it’s not Powell’s job to make the stock market go up. The Fed chair isn’t supposed to be a cheerleader for Wall Street. However, it seems that one minute the situation is calm, and the next Powell drops a verbal stink bomb that sends investors scurrying for cover.

Investors expecting a dovish pivot have suffered several “head fakes” this year. Maybe this time around, that optimism will be justified.

The latest good news on inflation is cheering investors, leading to realistic hopes that the FOMC will ease-up on rates next month.

News reports surfaced Friday that divisions are emerging on the Federal Reserve, as dovish members start to push back against the hawks. We’ll see how that tug-of-war plays out, as the inflation backdrop improves.

The government reported Thursday that the all-items Consumer Price Index (CPI) rose 7.7% in October over the past 12 months, compared to the estimate of 7.9%, and the actual 8.2% increase in the year through September. “Core” CPI (excluding food and energy) in October came in at 6.3% over the year, down from 6.6%.

Investors cried “Halleluia!” and the stock market posted explosive gains Thursday. I suspect relief that the divisive midterm elections are (mostly) over also fueled the rally.

On Friday, the major U.S. stock market indices expanded their rally from the previous day and closed higher as follows:

The 10-year U.S. Treasury yield dipped below 3.9%. The tech sector has surged over the past two days; falling yields are manna for rate-sensitive tech stocks.

Stocks have started November off on the right foot. While I am hopeful for the rest of 2022 and into next year, there’s no lack of pitfalls that could upset the upbeat mood, not least of which is the Russia-Ukraine war and the persistent havoc it’s wreaking in energy markets.

What’s more, the Fed’s tightening is starting to show up in the form of decelerating jobs growth. “Soft landings” are usually improbable goals. The rapid rise in rates this year could soon become manifest in economic damage.

Stocks have rallied lately, but bad news at home or overseas could send them tumbling again by the time the ball drops in Time Square next month. Between now and then we are likely to experience considerable volatility, creating ample opportunities to profit on both the long and short side of the market.

That said, the latest U.S. economic data have been positive, regarding gross domestic product growth, the jobs market, and inflation.

After this week’s CPI report for October showed an unexpected cooling of inflation, the betting on Wall Street is that the FOMC will announce a 0.50% interest rate hike next month, as opposed to yet another 0.75% hike.

History shows that stocks embark on a sustainable upward trajectory, whenever the Fed signals that its rate hikes are coming to an end. 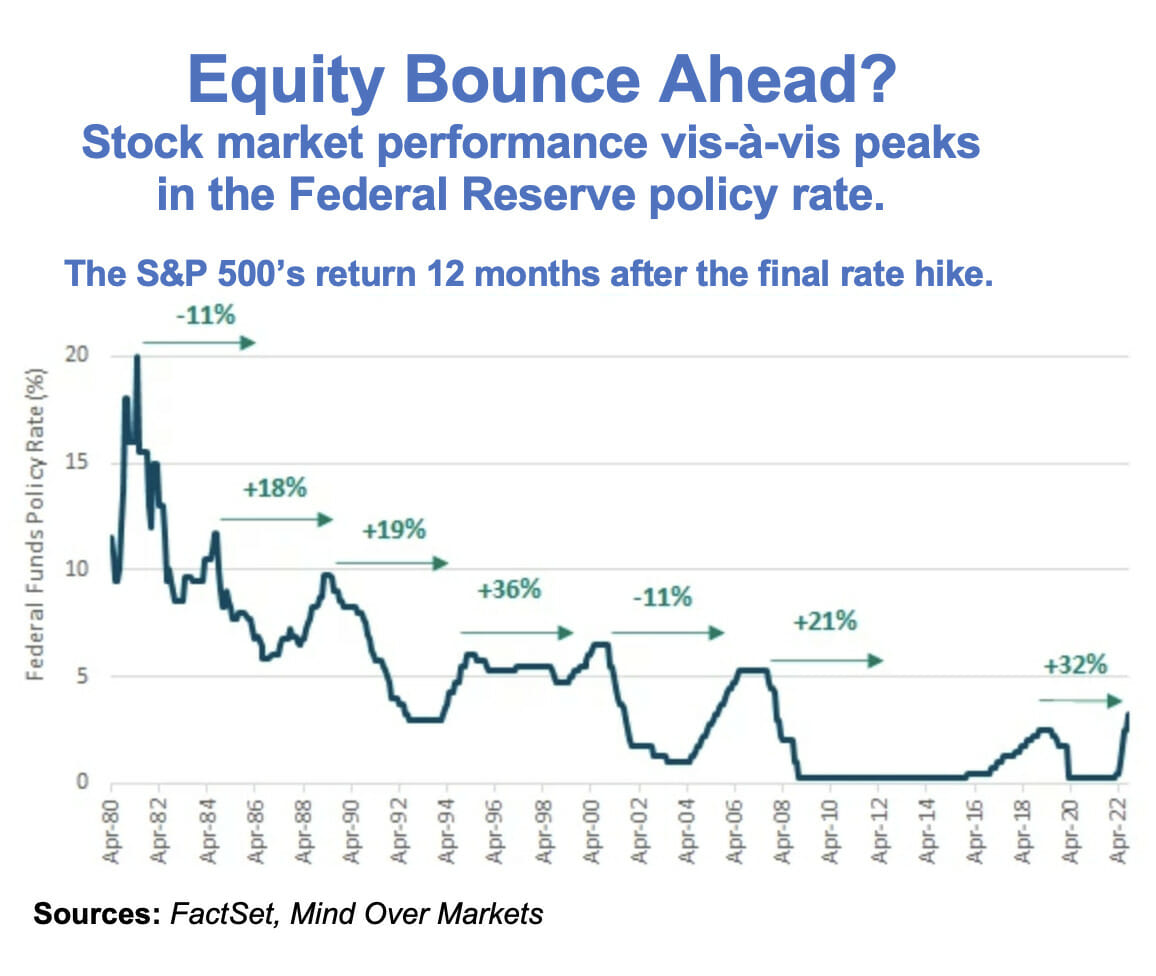 In the meantime, I am encouraged by how the third-quarter earnings season is shaping up, and by the forward guidance companies are offering as well. I would hardly call the results blistering, but they have come in better than expected, by and large.

In particular, mega-cap technology stocks have gotten crushed after posting disappointing (or even mixed) operating results. The rally after October’s CPI report, though, has been led by the tech sector. Rising rates tend to hurt speculative growth stocks; the converse is true when rates ease.

It is liquidity, or the lack of it, that drives stock prices up or down. Can the current market rebound last for the rest of this year and into the next? It largely comes down to Powell and his cohorts. Hopefully the market will react to what the Fed actually does, and not what Powell says.

PS: Despite the ups and downs of the economy this year, one product has emerged as a consumer staple with resilient demand: marijuana.

Yes, marijuana. That’s why I just launched a brand-new service detailing how you can financially benefit from the legalization of cannabis. Called Marijuana Profit Alert, it’s your guide to making money in these challenging times. Click here to learn more.