The Insider’s Triad: What Three Predictive Indicators Are Signaling Now

Stock traders will have to decide whether to keep this rally going, and what the Federal Reserve says and does in the next four weeks will weigh heavily on their decision making.

In my recent article, which correctly predicted the current stock rally, I alluded to the historical precedence for a stock market rally often starting in November during the second year of a presidential administration. This rally, when it occurs, often lasts through the third and fourth years of the presidential term and is usually related to the Fed lowering interest rates during those two years.

Nevertheless, in a market largely driven by technically based artificial intelligence guided trading (algos), it’s important to keep an eye on crucial predictive indicators that offer clues as to what the machines are doing.

In this article, I will explore three of them: the market’s breadth, sentiment, and liquidity. Collectively, I call them: “The Insider’s Triad.”

First, let’s see what the Fed may be up to.

The Federal Reserve is meeting on December 13 and 14 with an announcement about its future plans toward interest rate and monetary policy with a press conference to follow. After recent releases of the consumer and producer price indices showed cooling inflation in October, both the stock and bond markets rallied impressively, while the futures markets are pricing in a less hawkish 0.5% rate increase for December. 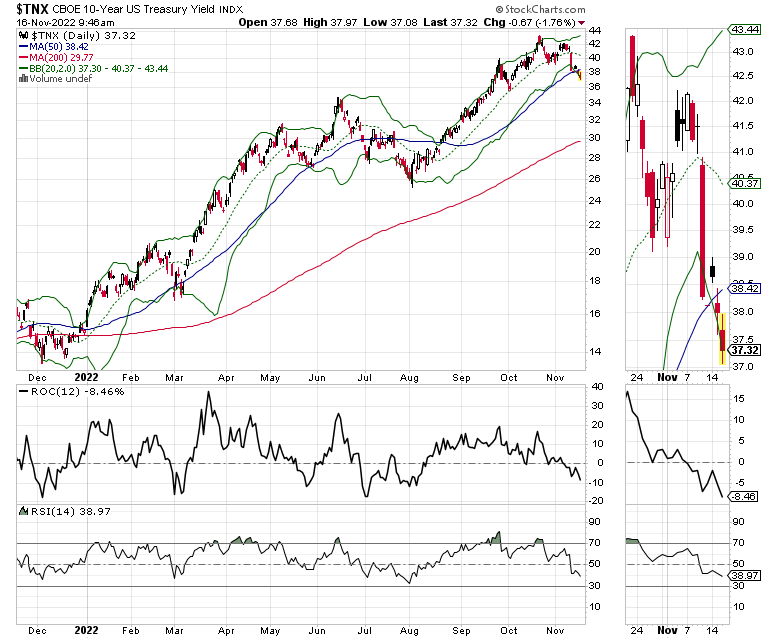 Both the U.S. 10-Year Note yield (TNX) and the U.S. Dollar Index (USD) fell in spectacular fashion as bullish traders rushed to price in a more friendly Fed. TNX has entered an intermediate-term bullish phase by crossing below its 50-day moving average, as traders bet on a slowing economy and a sustained slowing of inflation. 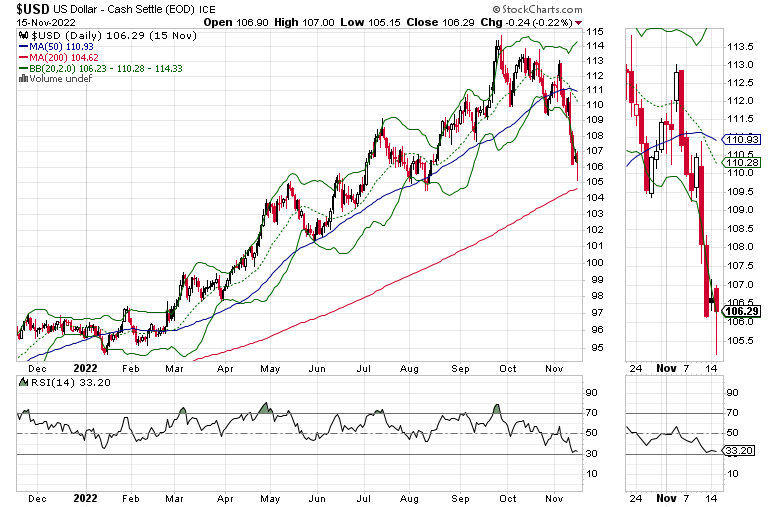 The U.S. Dollar has fallen to the point where it is closing in on its 200-day moving average. That’s a huge bet by currency traders that the Fed will make a meaningful announcement about the future of interest rates after its December meeting.

The problem with that notion is that the Fed has only suggested that it may slow down the pace at which it raises rates, not that it will stop raising rates. Moreover, the central bank has suggested that even if it stops raising rates at some point in 2023, it is likely to keep rates higher for longer than expected.

I like to analyze the stock market based on what I call The Insider’s Triad, a trio of indicators composed of:

This last indicator is worth diving into a bit deeper. That’s because when VIX rises, it signals that put buyers are very active. That means bearish sentiment is rising.

Traditionally, rising put volume has been seen as bullish. But in reality, that’s only at very extreme levels. Most of the time it’s bearish because when the public buys put options the market makers (algo trading machines) sell puts and then sell stock index futures to hedge their put sales to the buying public. The net effect is a decline in stocks.

When liquidity rises and VIX falls, NYAD rises, culminating a bullish turn of the Insider’s Triad for stocks. 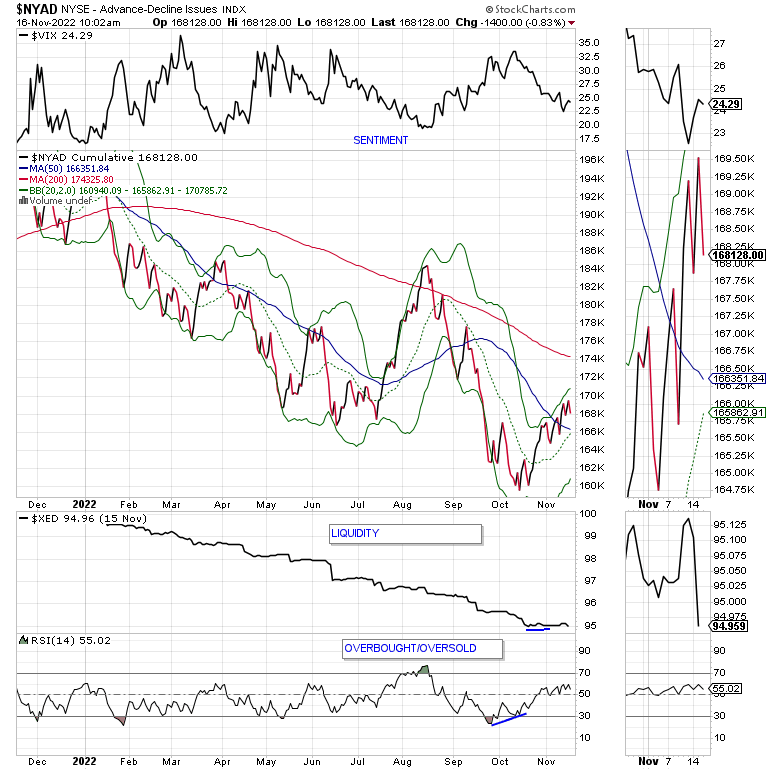 The chart above puts all of the indicators in the triad together in one place. Moreover, it illustrates the highly reliable relationships among liquidity, sentiment and the market’s breadth. Note that when XED falls, as it did through most of 2022, the NYAD has a generally downward tendency, becausse there is little money available to trade stocks.

Note that during the summer rally in 2022, XED was moving sideways. In addition, just before the current year-end rally, XED has moved a bit higher with stocks following, until recently when XED has reversed its gains and gains in the stock market have slowed. What that says is that as long as liquidity is, improving stocks tend to rally.

Now, look at the inverse relationship between VIX and the NYAD. Generally speaking, a rise in VIX leads to a decline in NYAD as the market makers’ hedging drives down stock prices. When VIX falls, stocks tend to rise.

In the current market stocks are rising as liquidity has stabilized and put buyers are scarce, although as uncertainty about the Fed rises we are starting to see some cracks in the system as VIX and XED are trying to turn around.

So far, breadth is holding up as the NYAD has just crossed above its 50-day moving average and the market still has one month before the next Fed meeting.

That’ because with earnings season nearing its end, companies are back to buying their own stock, which is helping to bid up prices. 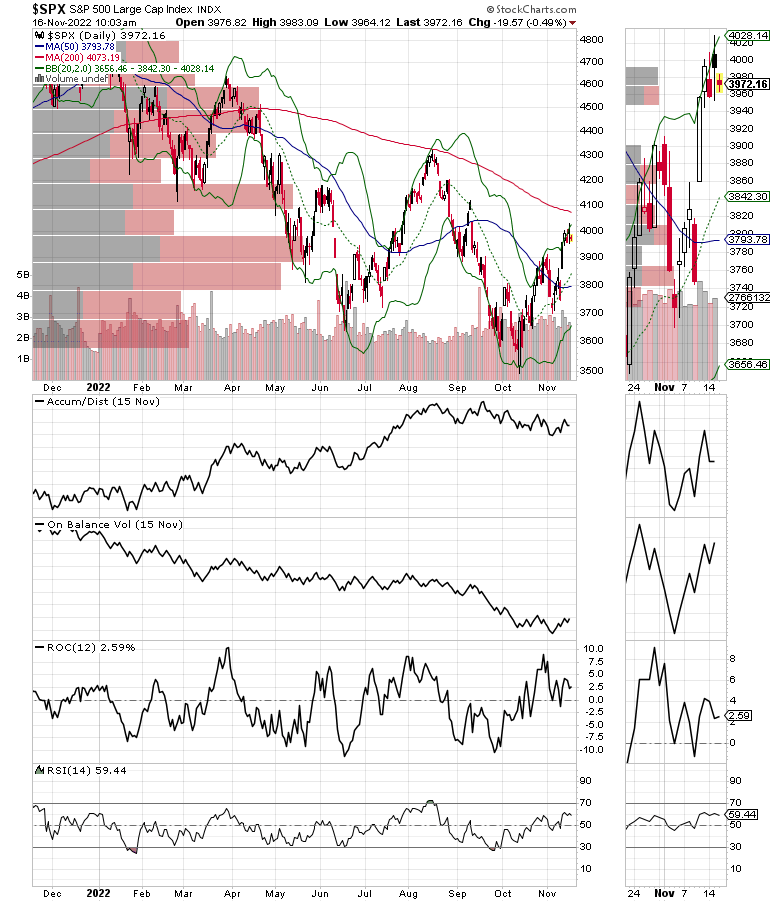 The S&P 500 (SPX) has come off of its bottom and has also crossed above its 50-day moving average, which is bullish, but which could reverse quickly if liquidity dries up and the put buyers return.

Now It Gets Interesting

Here is where it gets a little dicey. SPX has a lot of resistance (pent up selling waiting to happen), right around the 4000-4100 area. That’s where we see the 200-day moving average and a very large Volume by Price bar (VBP, large bar on the left of the chart).

It’s that price area where there will be some bumps in the road as traders who have made money off of the bottom start to take profits while those who got in near there are looking to get out even.

From a timing standpoint, stocks will likely remain in a bullish trend until and perhaps just after the Thanksgiving holiday, because there is strong seasonal history to support that dynamic.

After that, however, expect some volatility as the Fed speakers come out in force and sound hawkish ahead of their December meeting. Moreover, as the 200-day moving average for NYAD and SPX get closer, we can expect some profit taking.

It is also possible that if sentiment sours and put buyers return at any time, we will see a reversal in the uptrend. Keep an eye on VIX.

So, is this the real bottom or a fake out?

That’s the $64 billion dollar question. As we approach the technical levels which derailed the summer rally, especially if the Fed starts talking tough and delivers a higher-than-expected rate hike in December, all bets are off.

Editor’s Note: Did you know that options are powerful and flexible tools? They can be used by stock investors to reduce risk and enhance returns. Which brings me to my colleague, the renowned options trader Jim Fink.

Jim Fink is chief investment strategist of Options for Income, Velocity Trader, and Jim Fink’s Inner Circle. Jim has been sharing his trading secrets for over a decade, giving regular investors not just one, but two different opportunities to get paid every single week. In fact, while the market tanked several times over the last few years, he hasn’t closed out a single losing trade.