Target’s Pain Could be Your Gain

If you still have any doubts that we are in a two-tier stock market, consider last week’s activity in the retail sector. It wasn’t pretty and is illustrative of the extent to which Wall Street doesn’t know which way it will turn next.

That unexpected turn of events sent shock waves through Wall Street. If a company reputed to be as well managed as Target could mess up that badly, then who else may be in the same boat?

Best Buy (NYSE: BBY) will not release its quarterly results until this week. Nevertheless, its share price tumbled 9% that same day just on the fear that it might emulate Target’s sorry performance.

The same concern also sent Bath & Body Works (NYSE: BBWI) down 10% last week. But it surprised the market with strong Q3 results and raised its guidance for this year.

The company reported earnings per share (EPS) of 40 cents, exactly double the top end of its guidance of 10 – 20 cents. It also raised its guidance for full year EPS from a range midpoint of $2.85 to $3.10.

That day, BBWI gained 25%. A company thought to be headed for extinction was suddenly back in play on Wall Street.

Bear in mind, this is happening amidst the backdrop of the holiday gift buying season. Three months from now, those same companies could be reporting vastly different results.

All of which makes it extremely difficult to determine fair value for retailers. I thought BBWI bottomed out in early June, so I bought it in my personal trading account.

I paid a little under $39 per share, which was roughly half its peak price eight months earlier. At the time, I believed the entire retail sector had become oversold and was ripe for a rebound. 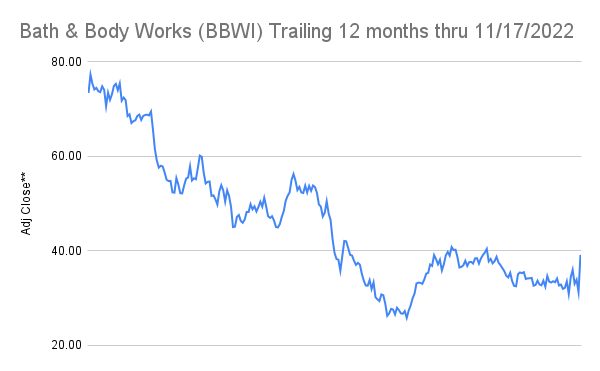 However, if I had waited another month I could have bought it for a lot less. On July 14, BBWI closed below $26, its lowest price in nearly two years.

Nevertheless, I held onto it because I was convinced it was grossly undervalued. Now, it is about the same price that I paid for it back in June.

So now I’m not sure what to do. If BBWI was undervalued six months ago at this price, then it should still be worth holding onto despite its huge jump last week.

But now that it gained 25% in a single day, how much more near-term upside potential is still in the stock? Pretty much all of the good news that could drive it higher has been realized.

That’s a tough call to make. Even after its big jump, BBWI is valued at less than ten times forward earnings. By that metric, it is cheaper than Walmart, Target, and Best Buy.

In this case, I am going to sell a covered call option on BBWI. That means I will offer someone else the right to buy my stock at a predetermined price within a specified time frame.

Last week while BBWI was trading at $38.50, the call option that expires on January 20 at the $40 strike price was selling for $3. If BBWI rises above $40 within the next two months, my shares can be called away from me at that price.

That is in addition to the $3 per share option premium that I get now for agreeing to do that. In essence, that makes my effective sales price $43 per share.

I only lose if BBWI rises above $43 prior to the option’s expiration. In that case, I would be better off by simply holding onto my shares.

However, I doubt that BBWI will appreciate another 11% over the next sixty days. Now that it has rebounded so strongly, the more likely scenario is some reversion to the mean.

And if I turn out to be wrong about that, I will happily book my modest profit in BBWI and move on to something else. The great thing about the stock market is that there is always something else going on sale.

Editor’s Note: As Jim Pearce just showed you, options are powerful and flexible tools. They can be used by stock investors to reduce risk and enhance returns.

Jim Fink is chief investment strategist of Options for Income, Velocity Trader, and Jim Fink’s Inner Circle. Jim has been sharing his trading secrets for over a decade, giving regular investors not just one, but two different opportunities to get paid every single week. In fact, while the market tanked several times over the last few years, he hasn’t closed out a single losing trade.