The Fed’s at The Wheel…and That’s The Problem

When it comes to overall market direction, the Federal Reserve remains in the driver’s seat, which for me conjures the final scene in Harold and Maude. In the denouement of that 1971 black comedy, Harold purposely drives his Jaguar E-Type hearse off a cliff.

Inflation in the United States is cooling, as evidenced by data for the October consumer and producer price indices. And yet, the Fed is sticking to its course of aggressive tightening, even at the risk of wreaking gratuitous harm to the economy.

Here’s a fact: The main culprit for U.S. inflation isn’t reckless federal government spending. Inflation is largely the result of shortages and supply chain disruptions caused by the pandemic and Russia-Ukraine war.

Riddle me this: If U.S. fiscal policy is responsible for inflation, why is inflation much worse in most other countries?

The year-over-year rate of all-items consumer price index (CPI) inflation in the U.S. for October stood at 7.7%, below forecasts and reflecting a downward slope. To cite just one contrasting example, the YoY CPI rate of inflation in the United Kingdom for October was 11.1%, exceeding forecasts. In some countries, inflation is running at triple digits.

The average global CPI inflation rate is 8.8%. As the following chart from the International Monetary Fund (IMF) shows, food and energy are the main forces currently driving inflation higher around the world: 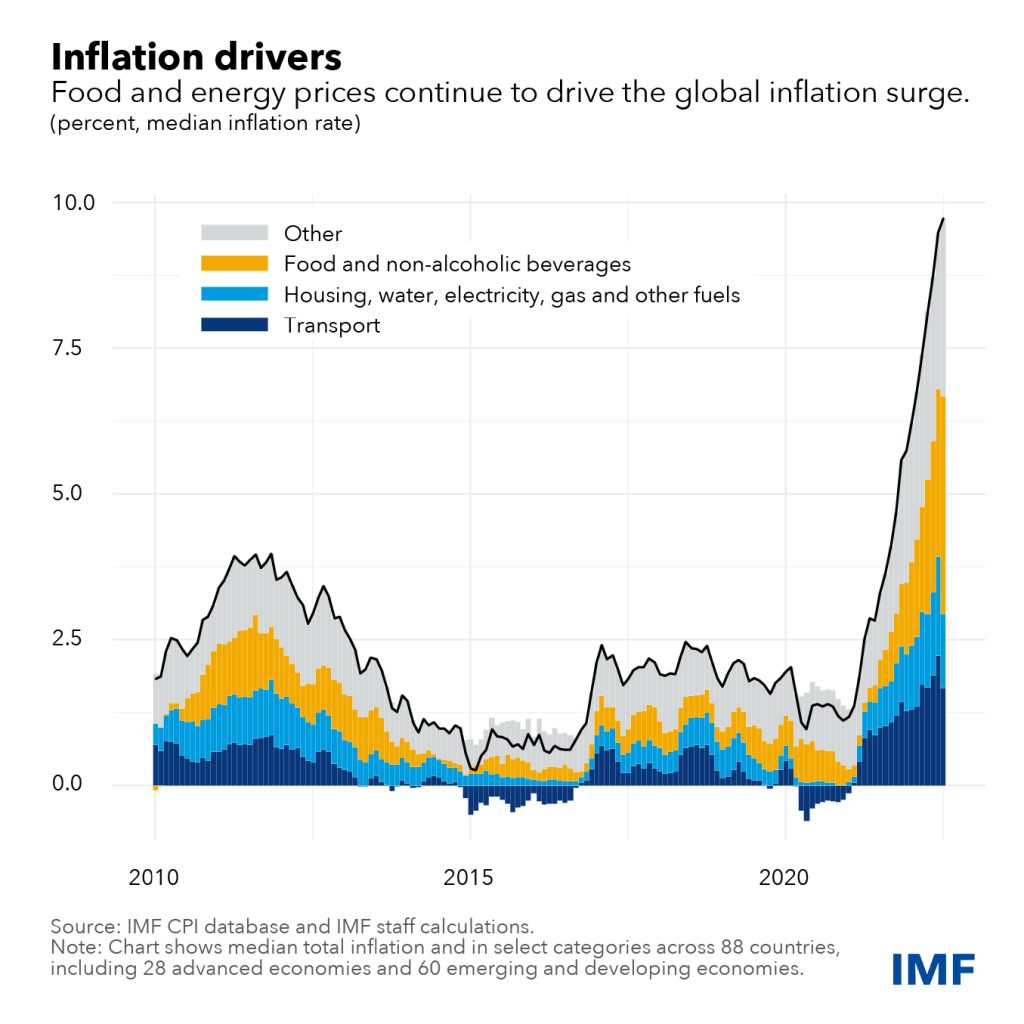 Higher interest rates in the U.S. will contract the economy, which of course will make a dent in inflation. But the human cost will be disproportionately high. Interest rate policy can’t ameliorate the food and energy shortages caused by Vladimir Putin’s war in Eastern Europe, nor the lingering supply-and-demand imbalances caused by COVID.

Blaming the fiscal stimulus that was enacted under President Biden for inflation is political demagoguery. And that argument conveniently forgets the stimulus passed under President Trump. Has stimulus exacerbated inflation? Yes, somewhat. But without those forceful steps to counteract the economic slump (and fear) caused by the pandemic, the alternative would have been a deep recession and perhaps outright depression.

Now that the U.S. midterm elections are over, these falsehoods about inflation are falling by the wayside because they no longer serve a political purpose. Midterm messaging is getting abandoned.

For example: We heard a lot of sniping by partisans about gasoline prices when they were rising, but now that those prices are falling, we’re hearing the sound of crickets. As of this writing, the nationwide average per-gallon price of gas hovers at $3.70, down from its peak of $5.00 in June of this year.

Let me put it this way: I don’t think the House GOP’s promised investigations into Hunter Biden’s laptop will do much to bring down inflation and gas prices.

The good news is, supply chains are mending, equilibrium is returning to energy markets, seaport bottlenecks are easing, and shipping costs are dropping. U.S. goods inflation is plunging and services inflation is stabilizing. Jobs and wage growth are decelerating. But the Fed seems to suffer PTSD from the hyper-inflation of the 1970s.

Powell isn’t the only member of the U.S. central bank with a penchant for talking down the stock market. We’ve enjoyed an equity rally so far this month, but St. Louis Federal Reserve President James Bullard saw fit this week to kill the groove.

“Thus far, the change in the monetary policy stance appears to have had only limited effects on observed inflation, but market pricing suggests disinflation is expected in 2023,” Bullard said in an interview Thursday.

Bullard is a voting member of the central bank’s policy-making Federal Open Market Committee (FOMC), which means he’ll be a hawkish vote when the FOMC meets again in December.

In the wake of Bullard’s remarks, the major U.S. stock market indices sank Thursday. They also opened lower Friday, but then rallied in the afternoon in choppy trading, and closed as follows:

Buckle up. Stocks have rebounded in November, but we’re still driving at cliff’s edge.

Editor’s Note: What are your views on inflation? I’d love to hear from you. Let’s get a dialogue going. You can reach me at: mailbag@investingdaily.com.

In the meantime…how can you hedge your portfolio against the risks I’ve just described, and still enhance gains? Consider the advice of my colleague Jim Fink.

Jim Fink is chief investment strategist of Options for Income, Velocity Trader, and Jim Fink’s Inner Circle. Jim has been sharing his trading secrets for over a decade, giving regular investors not just one, but two different opportunities to get paid every single week.

While the market tanked several times over the last few years, Jim hasn’t closed out a single losing trade. His methods work in up or down markets, regardless of Fed policy or the rate of inflation. To learn about Jim Fink’s latest money-making trades, click here.