Marijuana investing is like alchemy, whereby you can turn a green flowering plant into cold hard profits.

There’s been a lot of news in the pot sector lately, underscoring the lucrative potential of the green rush. Let’s get right to it.

New York State cannabis farms are stuck with a surplus crop of 300,000 pounds of marijuana, valued at $750 million, with few places to sell the weed as permits for dispensaries in the state remain mired in delays and red tape.

When New York became the 15th state to legalize recreational cannabis on March 31, 2021, the door opened to one of the largest marijuana markets in the world.

New York is scheduled to launch marijuana retailers this year, but scores of applicants for legal cannabis retail stores are still waiting to get guidance and approval from the state’s Cannabis Control Board (CCB).

The CCB has promised to sort out the mess and it appears to be making headway. On Monday, the board approved the state’s first-ever licenses for recreational marijuana retailers, an important step in breaking the logjam. But many more approvals are still needed to help make a dent in the agricultural surplus.

As part of the state’s efforts to pursue “social equity,” most of the approved canna-businesses are owned by people who’ve been disproportionately harmed by the War on Drugs, while others are operated by nonprofit entities that help disadvantaged people reenter society after imprisonment.

WATCH THIS VIDEO: Pot Stocks Are Poised to Light Up 2023

A lot of money is at stake, for entrepreneurs and the government. According to the executive budget of Gov. Kathy Hochul (D), New York is set to reap more than $1.25 billion in marijuana tax revenue over the next six years.

The cannabis clemency also provides forgiveness for more than $14 million in fines and fees. The action comes in the wake of similar action by the White House.

“No one deserves to be forever saddled with the impacts of a conviction for simple possession of marijuana—a crime that is no longer on the books in Oregon,” Brown stated. See the following tweet, posted Monday: 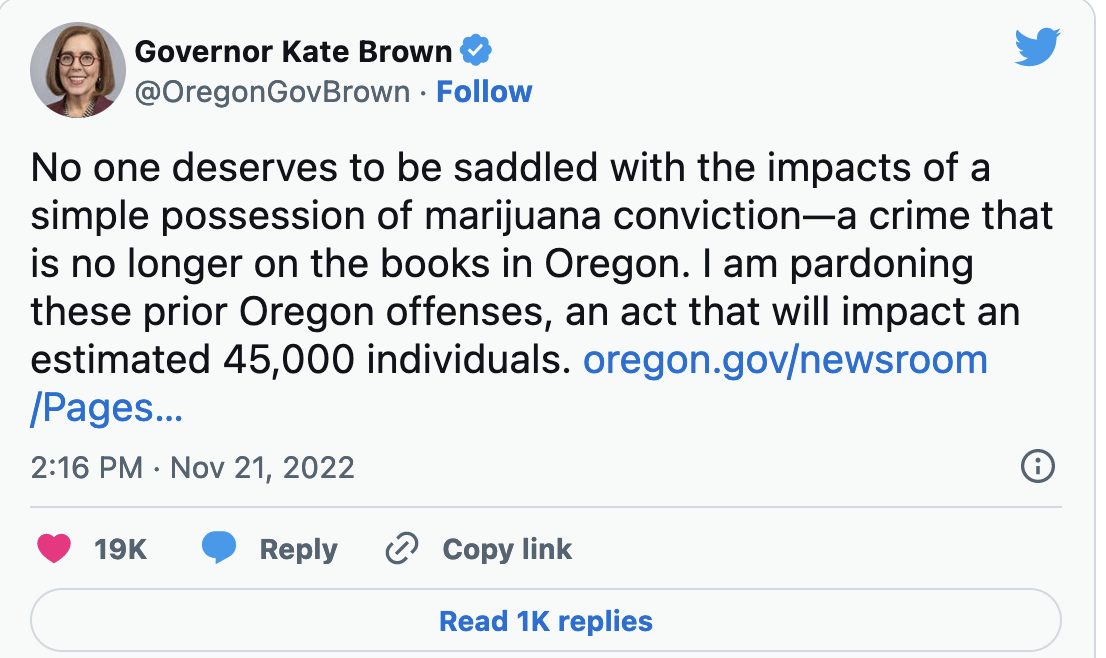 Gov. Brown added: “Oregonians should never face housing insecurity, employment barriers, and educational obstacles as a result of doing something that is now completely legal, and has been for years.”

The Senate approved the legislation under unanimous consent, two months after it cleared the House. The bill represents the first piece of cannabis reform legislation in U.S. history to land on the president’s desk.

Biden will sign the legislation, which would give U.S. Attorney General Merrick Garland 60 days to either approve an application or request supplemental information from the marijuana research applicant. The bill also would forge a more streamlined route for researchers who request larger quantities of cannabis.

Medical researchers have long complained that because pot remains illegal on the federal level, it’s often difficult to procure sufficient quantities of weed for laboratory purposes. This bill would help rectify the problem.

My new publication covers news and trends in the marijuana industry. I also speak on a regular basis with industry insiders, whether they’re on Capitol Hill or in corporate suites or on Wall Street.

I crunch a lot of data, put it through my proprietary screening system, and provide specific, actionable advice on the best investments in the marijuana and psychedelics sectors. I strive to strike the right balance between risk and reward.

To learn more about Marijuana Profit Alert and my latest trades, click this URL.