Has Inflation Topped Out? (Does the Fed Even Care?)

After an exhausting year of record setting interest rate increases from the Federal Reserve and other global central banks, emerging signs suggest inflation has peaked.

The real questions are whether this pause is temporary or a true reversal in the long-term trend and whether the Fed will change its projected plans on keeping interest rates “higher for longer.”

We will certainly know more in January when key inflation data are released and the U.S. central bank meets.

I don’t know about you, but I’m sick and tired of paying $80 bucks for two small bags of groceries that cost $50 only a few months ago. Even worse is the fact that as prices have risen, the packages have gotten smaller. But (fingers crossed), the worst of the inflationary surge may be over, at least for a while.

Read This Story: Is The Inflation War Over?

The top two bullets suggest inflation may have topped out while the bottom tier suggest that the Fed’s rate hikes have begun to bite and that the economy is slowing down. When you add the not as yet recognized job cuts in government surveys, which have been well documented by private surveys, a picture of a slowing economy clearly emerges.

And now there are even reports that used Tesla (NSDQ: TSLA) sales are crashing.

The Fed will have December 2022 inflation data (CPI and PPI) by the time its first meeting for 2023 convenes on January 31. The news on the Fed’s decision on rates will be released on February 1. Of course, a press conference will follow, which will likely cause all kinds of problematic stock and bond market volatility.

Be that as it may, Fed Chair Jerome Powell is hoping for a soft landing. That’s the economic term which describes a beating down of inflation by the central bank via higher interest rates without causing a recession. The only soft landing in modern history was achieved by Alan Greenspan’s Fed in 1994. The often maladroit Mr. Powell isn’t exactly Greenspan, whose tenure at the Fed was truly artful.

If truth be told, it’s hard to see a soft landing emerging from this round of interest rate hikes given the difficulties faced by small businesses and even some large businesses in the post-COVID world. Continuing apace are the Russia-Ukraine war and supply chain uncertainties around the world.

On the other hand, Powell has made it clear that he is willing to inflict pain on the economy to knock inflation down to the central bank’s target growth rate of 2%.

So, if we use CPI as a guide, he’s still got 5 percentage points to go. By PCE, he’s got 3.8%. Neither of those figures are very encouraging as they suggest that one or two things would have to happen to get there.

One is that the Fed keeps its promise to maintain rates higher for longer. The other is that the Fed’s actions push the economy over the edge and a recession ensues. The bullets above suggest the economy is slowing. Anecdotal data suggest many areas of the country along with industry sectors are already in recessionary scenarios.

The Market’s Message on Food Costs

If we focus on the CPI components which are still trending higher, food and housing, specifically rental costs, we can see an interesting picture emerging in the stock market. 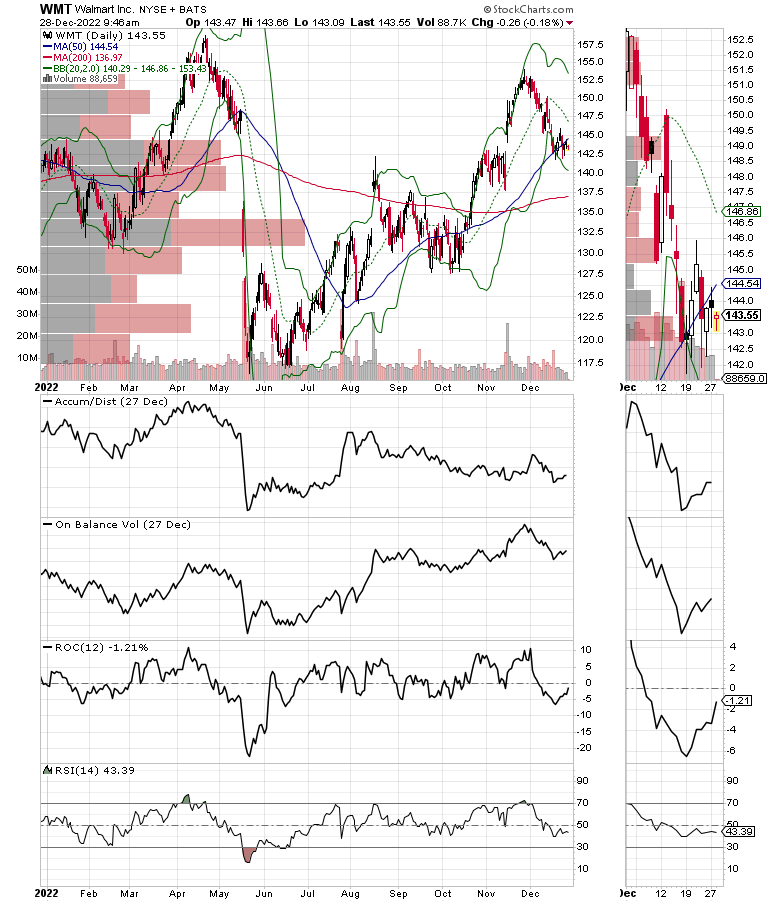 Walmart (NYSE: WMT) is a bellwether for consumer spending, especially on food. Recent reports have noted that even upscale consumers have been flocking to the discounter to cut their food bills. Yet, the stock is off of its best levels which were recently achieved after a better-than-expected earnings report for its most recent quarter.

Moreover, the slowly developing sideways trend in two key money flow indicators (Accumulation Distribution Indicator and On Balance Volume) suggest that a balance between buyers and sellers is developing. Some investors are developing a wait-and-see attitude regarding Walmart.

This may be a sign that the market is pondering whether better-than-expected inflation news may emerge in January. What will be most interesting to see is whether prices at Walmart and other discounters begin to fall and eventually reduce persistently rising foods costs.

Meanwhile, the crash in leading avocado producer Mission Produce (NSDQ: AVO) suggests that some food costs are already falling. The company missed earnings due to a lack of pricing power on avocados, despite rising sales. 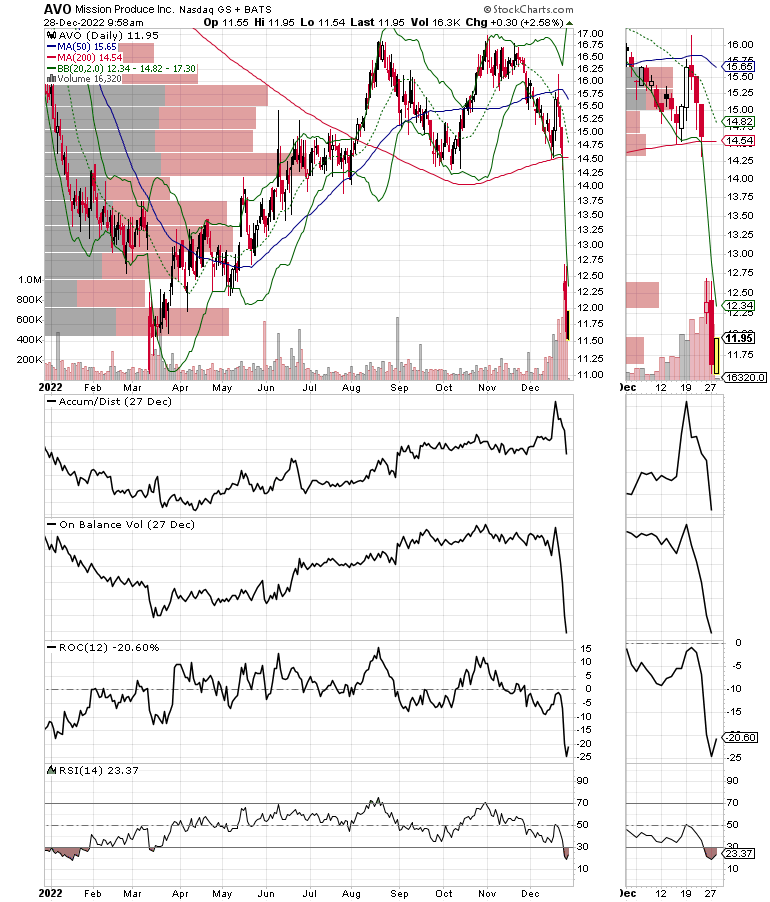 I haven’t noticed a fall in avocado prices yet, although the price hikes seem to have stopped. I’ll be watching this one more closely over the next few weeks.

Food prices may be on the verge of slowing down, but the fly in the ointment for the Fed may be the costs of renting a house.

According to CNBC, the rate of rise in rental prices is slowing. This of course is a good thing. On the other hand, the rate increases over the last few years have been so aggressive that the data may not be good enough to sway the Fed.

Here are some details:

“Rent growth in November slowed for the 10th straight month, with rents up just 3.4% compared with November 2021, according to Realtor.com. That is the smallest gain in 19 months. In the 50 largest metropolitan markets, the median asking rent dropped to $1,712, down by $22 from October and down $69 from July’s peak.”

Yeah, we’re not seeing much movement in rent, which is what may keep the Fed on its “higher for longer” interest rate track.

Shares of America’s biggest landlord, the Blackstone Group (NYSE: BX), have plunged over the last 12 months as higher interest rates have pummeled their real state business. Certainly, Blackstone’s private equity and hedge fund divisions are not immune from the Fed’s rate hikes, but their residential real estate has been a sore point. 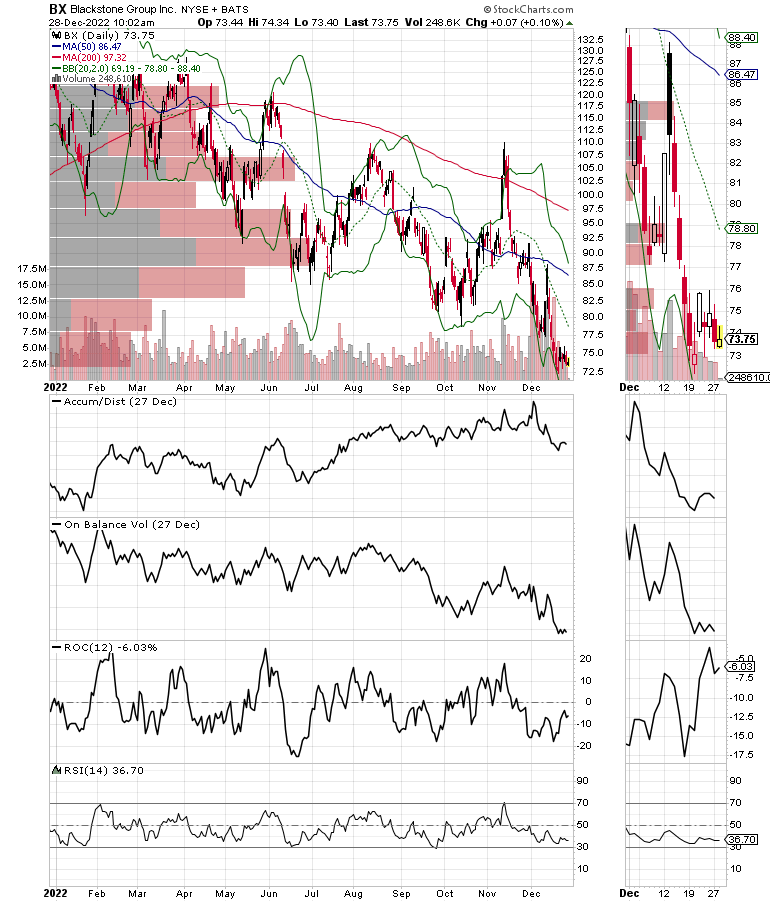 Still, during the most recent earnings call, Blackstone President and COO Jon Gray answered a prescient question about the company’s residential real estate component from an analyst, by noting that as the rate hike cycle continues, developers are scaling back on construction of both single family homes and multiple family homes.

Gray summed it up by saying: “And then as a result, we start to see this sharp decline in new supply, it should be even better coming out.”

As I’ve noted here multiple times, the supply crunch in housing isn’t going away anytime soon, which means that even if food prices fall, rent inflation might be the fly in the ointment for the Fed.

Interestingly, the stock market is not in tune with Blackrock’s bullish long-term stance as it pertains to the company. This may be due to difficulties in other areas of Blackstone’s business. They have had some issues with their real estate investment trusts (REITs) of late.

There are emerging signs that prices may be moderating in some areas of the economy while other areas remain stubbornly attached to higher prices.

The U.S. economy is showing signs of slowing down, but regardless, the Federal Reserve is predicting higher interest rates for an extended period of time.

Financial markets are jittery. January’s CPI and PPI releases will be carefully scrutinized. The Fed will make its intentions known on February 1, 2023.

Something’s got to give.

PS: To guide you through these uncertain times, our analysts have compiled a special report of seven shocking investment predictions for 2023, and how to profit from them. To download your free copy, click here.