Now that it’s officially January 2023, I’m reminded that the month is named for the Roman god Janus. In ancient Roman myth, Janus is the god of beginnings and endings. He is depicted as having two faces, because he simultaneously looks to the future and the past. Janus is the god of time, gates and passages.

Let’s take a look at the marijuana industry’s recent past and see what it portends for 2023. Will the past serve as prologue? In other words, will history set the context for the future?

So far, the omens are promising, albeit with caveats.

President Joe Biden in October 2022 announced a pardon for thousands of Americans convicted of “simple possession” of marijuana under federal law. The move addressed policing practices that disproportionately hurt minorities and renewed momentum for legalizing weed on the national level.

In December 2022, Biden signed the Medical Marijuana and Cannabidiol Research Expansion Act, an historic first for federal marijuana law reform. The law gives the U.S. attorney general 60 days to either approve a given application or request supplemental information from the marijuana research applicant. The new law also creates a more streamlined process for researchers who request large quantities of marijuana.

In Congress, several pieces of legislation are pending that would legalize marijuana on the federal level. With the GOP now in control of the U.S. House, there’s little chance that these bills will pass in 2023. Among House Republicans, two political factions are vying for dominance: the right and the far-right. The respective leaders of these factions don’t favor the federal legalization of pot, although an increasing number of rank-and-file Republicans are warming to the cause.

But there’s one pending bill that nonetheless stands a good chance of becoming law this year: the Secure and Fair Enforcement (SAFE) Banking Act, which is designed to protect banks that accept marijuana business clients from being penalized by federal regulators. SAFE represents incremental reform and it’s strongly backed by financial industry lobbyists. The bill has attracted bipartisan support.

The Cannabis Caucus weighs in…

In their end-of-year memorandum released in December 2022, the Congressional Cannabis Caucus expressed optimism for 2023:

“The Congressional Cannabis Caucus has brought together a broad coalition of members from diverse communities around the country who all agree: it is time for Congress to finally reform federal cannabis policy.

“There will be some big changes in the next Congress, but one thing that will not change is that a majority in both the House and the Senate favor reform. We are optimistic for our ability as a caucus to help navigate these changes and make further progress.”

The memo went on to state: “While work remains, there have been significant developments over the course of the year.” The lawmakers pointed to Biden’s pardon, as well as the White House’s administrative review into the federal scheduling of cannabis.

“As we transition to the 118th Congress, we must heed the calls of the American public and take bold action to end the failed war on drugs once and for all,” the memo asserted.

As of this writing, medical cannabis is legal in 37 states and adult-use (recreational) marijuana is legal in 21 states. Nearly half of the U.S. population now reside in jurisdictions with some form of legalized adult-use marijuana (see chart). 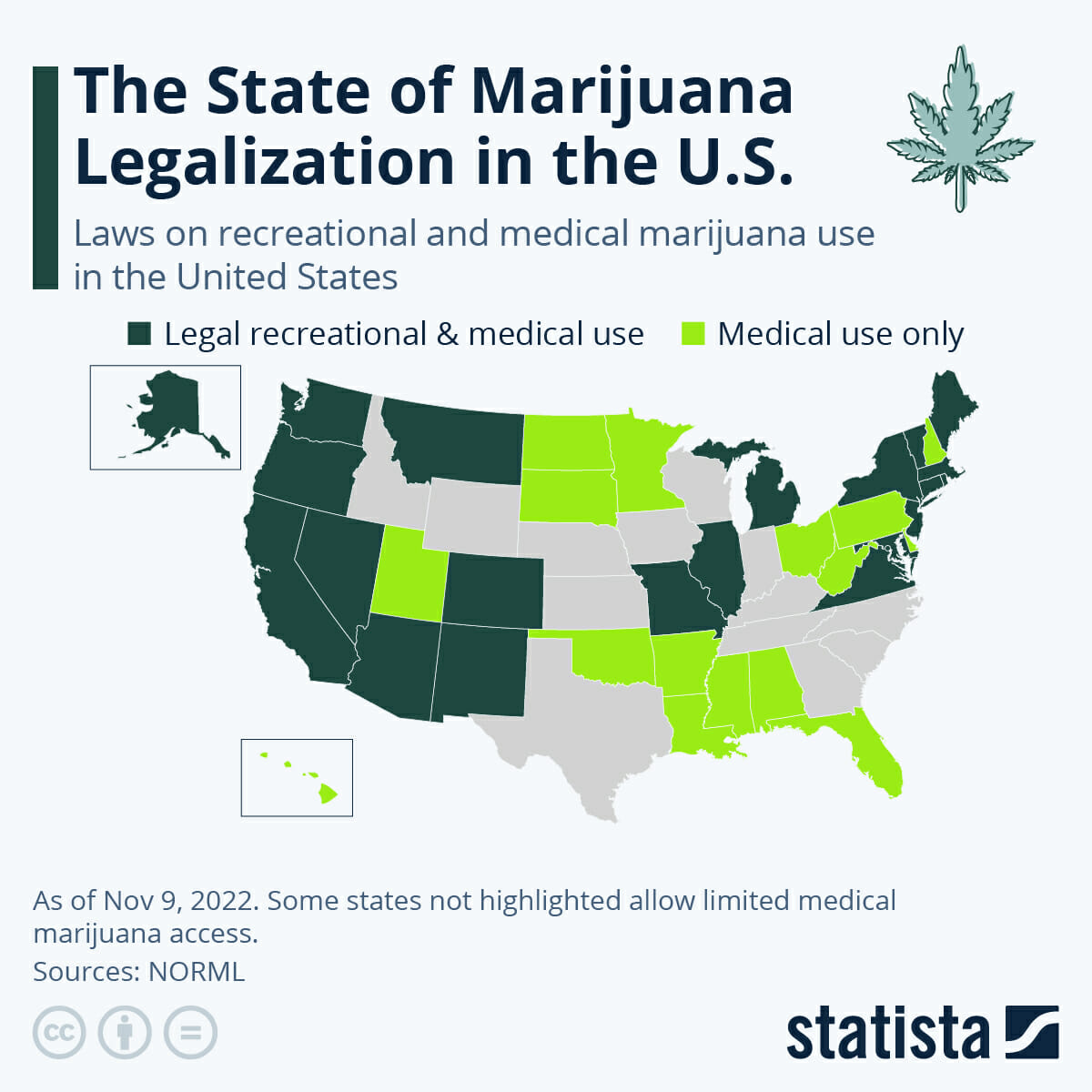 In 2023, an increasing number of lawmakers on the federal, state and local levels are likely to feel political pressure from the majority of Americans who support lifting restrictions against marijuana.

New legal markets equal new profits, and higher share prices, for marijuana companies. Indeed, we could be facing a “break out” year for marijuana and the ancillary industry of psychedelics. That’s why I’ve launched a new investment service called Marijuana Profit Alert.

My publication covers news and trends in the marijuana and psychedelics industry. I also speak on a regular basis with industry insiders, whether they’re on Capitol Hill or in corporate suites or on Wall Street.

I crunch a lot of data, put it through my proprietary screening system, and provide specific, actionable advice on the best investments in the marijuana and psychedelics sectors. In my portfolio of holdings, I strive to strike the right balance between risk and reward.

To learn more about Marijuana Profit Alert and my specific money-making trades, click this URL.