The Friendly Skies: Border Agents Ease Up on Weed

“Comin’ into Los Angeles
Bringin’ in a couple of keys
Don’t touch my bags if you please, mister customs man…”

Those lyrics are from Coming Into Los Angeles, a 1969 song by the prototypical hippie Arlo Guthrie. Son of the famed Woody Guthrie, Arlo sang that pro-marijuana protest song at the original Woodstock festival.

Back then, border patrol agents fiercely enforced the federal ban against marijuana. And if you got caught with weed, you faced a long prison stretch.

But a new government report released this week indicates that Mister Customs Man is starting to look the other way. It is now allowable in certain instances to legally cross the border and fly with marijuana in your possession. I’ll explain the details, below.

CBP is the nation’s largest federal law enforcement agency charged with securing the nation’s borders and facilitating international travel and trade. CBP marijuana seizures have plunged nearly 95% over the past decade, from a total of 2,822,478 pounds in fiscal year 2012 to just 154,797 pounds in 2022 (see chart). 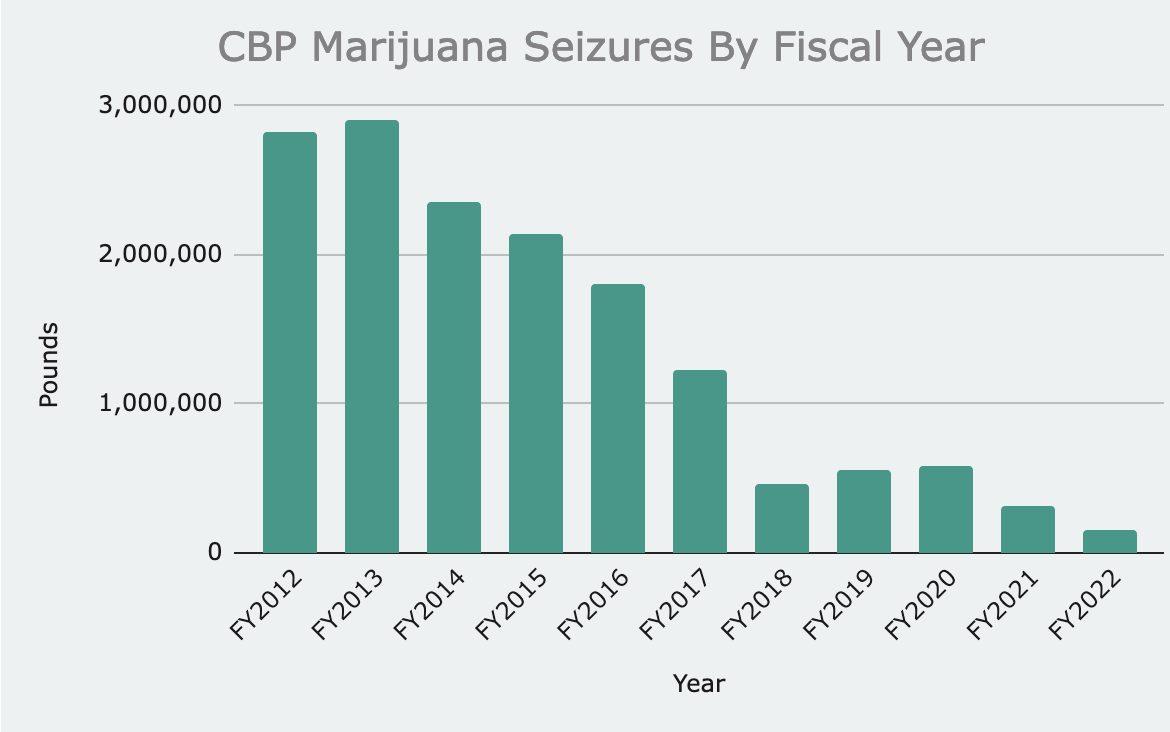 Law enforcement as a whole is easing up on marijuana.

As part of its fiscal year 2023 budget summary submitted to Congress, the U.S. Drug Enforcement Administration (DEA) asserted that as greater amounts of cannabis are being produced domestically in the U.S., illegal pot trafficking across the southern border from Mexico is plummeting.

LAX gets lax on weed…

If you had told Arlo about the latest policies at Los Angeles International Airport regarding marijuana, he would have assumed you were stoned. But the fact is, LAX officially states on its web site:

“As of January 1, 2018, California law allows for individuals 21 years of age or older to possess up to 28.5 grams of marijuana and 8 grams of concentrated marijuana for personal consumption. With the change in state law, the policy and procedures of the Los Angeles Airport Police Division (APD) regarding marijuana were updated to reflect this change. APD officers, who are California Peace Officers, have no jurisdiction to arrest individuals if they are complying with state law.”

In other words, travelers can bring marijuana through the airport. LAX became the first major domestic airport to take a tolerant stance on weed. Airports in Washington state and Oregon have followed LAX’s example; additional airports are expected to join the list this year.

So, it begs the question: can you legally fly with marijuana? The answer: kinda sorta.

According to the U.S. Transportation Security Administration (TSA): “Marijuana and certain cannabis-infused products, including some Cannabidiol (CBD) oil, remain illegal under federal law except for products that contain no more than 0.3 percent THC on a dry weight basis or that are approved by FDA…TSA officers are required to report any suspected violations of law to local, state or federal authorities.”

That seems like an unequivocal “no.” Ahh, but when it comes to marijuana’s legal status, nothing is black and white. The TSA goes on to state:

“TSA’s screening procedures are focused on security and are designed to detect potential threats to aviation and passengers. Accordingly, TSA security officers do not search for marijuana or other illegal drugs, but if any illegal substance is discovered during security screening, TSA will refer the matter to a law enforcement officer.”

And there’s your loophole.

Public sentiment is demanding these changes in official attitudes. According to a recent survey conducted by the American Civil Liberties Union (ACLU) and Drug Policy Alliance (DPA), two-thirds of American voters think that the War on Drugs has been a failure and should immediately cease.

The Controlled Substances Act (CSA) was passed in 1970, at a time when the rebellious behavior of the counter-culture prompted the Nixon White House to initiate what it called a “War on Drugs.” President Nixon wielded the War on Drugs as a club to bludgeon his enemies.

Now, lawmakers on both the left and right of the political spectrum are calling for an end to the failed War on Drugs, and law enforcement is heeding the call.

The consumer mainstreaming of marijuana is a cultural seachange that’s even transforming the attitudes of law officers. New legal markets translate into new profits for the proliferating number of publicly traded cannabis purveyors.

Every portfolio should have exposure to the marijuana industry. That’s why I’ve just launched a new service detailing how you can financially benefit from the growing use of cannabis.