I recently had a conversation with my colleague John Persinos about the general state of the world and what that might mean for investors. The upshot is that as time passes, even though I keep up with the news, I rely more and more on price charts to make my final Buy/Sell decisions.

The simple truth is that in my view, price charts distill the essence of what’s going on and where money flows are headed more precisely than other analytical methods.

This is especially applicable to key support and resistance levels, the price areas where trend reversals or breakouts to new trends usually develop. In this article, I will discuss one specific chart point which is often critical when it comes to trading with the trend.

Let me get this out of the way. Of course, as a person I’m concerned about the myriad of issues facing the world at the moment and what it might mean for the present and the future of humanity. But the hard truth is that as investor, it’s best to separate emotion from the ability to successfully execute trades.

And that’s where price charts come in very handy. I think of them as constant visual records of the past, and the present. Moreover, they offer glimpses into the future which often come in handy when making Buy and Sell decisions.

Consider the fact that there is no other instrument in the world that chronicles every single price tick in a financial instrument and chronicles it for posterity in real time. That one characteristic in and of itself is priceless. Now add the fact that when you add indicators to the price action which is constantly recorded you can analyze an asset’s momentum, which is the primary variable which dictates when the price will reverse its current direction.

The financial markets are dynamic. That’s because they are complex systems in which the interaction between its components (agents) and the environment are the primary forces which dictate the direction of prices over time. It is that one characteristic, which when enhanced via the use of confirmatory indicators, offers glimpses into the future.

In contrast, economic models tend to be static and backward looking. They rarely take into account the notion that events happen unexpectedly and that the historical evidence and the models derived from them can be rendered useless by a purely intangible new development which changes everything.

For example, economists forecast that the U.S. economy would be in a recession soon after the Federal Reserve embarked on its current interest rate hike cycle. But so far, even though there are signs of a recession in some areas of the U.S., it’s not a widespread event.

That’s because economies are complex systems. The term that best defines complex systems is adaptability. Moreover, when a small segment of the agents in the system finds success, other agents see the success and imitate it. Eventually the majority of the system imitates the successful activity and the system emerges to a new level of activity.

I wrote a recent article on the adaptability of complex systems and how to turn it into profits. You can find it here.

My point is that static models are slow to adapt, while dynamic complex systems are much more efficient and faster in their rate of adaptation.

Price charts chronicle the complexity of price behavior and any market’s adaptation to change in real time.

Looking at the Stock Market Via Complex Lens

The Dow Jones Industrial Average (INDU) gets all the headlines. But the Standard & Poor’s 500 Index (SPX) is widely accepted by professionals to be the bellwether index whose performance tracks the price trend for U.S. stocks. It’s also a perfect example of how a price chart chronicles the complex system known as the U.S. stock market.

Consider the fact that every time one of the 500 stocks in SPX is bought or sold, that particular action affects the price of the index. Over time, this constant activity is captured in a price chart and price trends emerge.

That means that the action of every agent in the system (traders, market makers, and corporations) and their interaction with the environment (central banks and governments) is recorded, tick by tick. In addition, the results of external events on those interaction displayed on this price chart can be further analyzed by the addition of technical indicators. 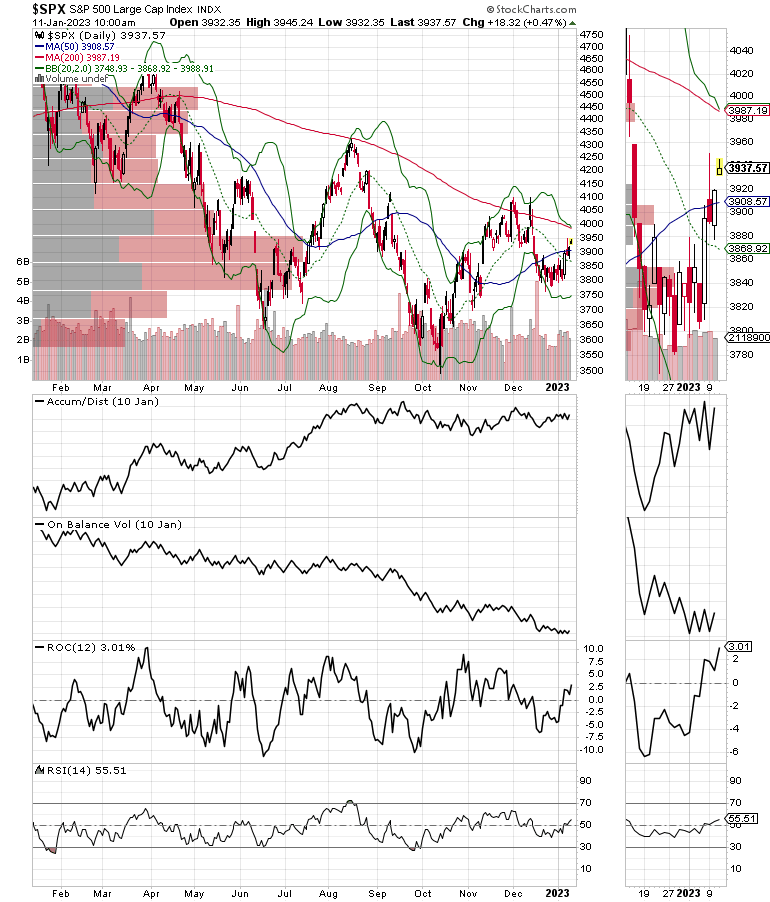 The two major events of 2022 were the Federal Reserve’s pledge to raise interest rates as high as they needed to in order to reduce inflation and the war in Ukraine. The net result of those environmental events and the interaction of the agents in the stock market is plain to see. The S & P 500 was down some 18% in the months that followed.

And even though there were counter trend rallies, every time the Federal Reserve raised rates during this period, the market fell.

There were two periods in 2022 when SPX rallied: June to August and October to December. Both rallies were in response to news items which suggested that the Federal Reserve was done raising interest rates.

Specifically, news reporters, economists and Wall Street analysts, parsing snapshots of economic data and excerpts of Federal Reserve official speeches, suggested the Fed might pause. This, of course, would be a good thing for the stock market, which is why we saw the two rallies.

But the reporters, economists, and analysts were wrong as each time the news buzzed about the end of the rate hikes the Fed made it clear that they were not going to change course anytime soon.

On the other hand, the SPX price chart and the concurrent indicators served as excellent warning signs that the bear market was not over. Note the following:

The combination of news and conclusions based on static models often misleads investors to make decisions which cost them money. Price charts, when used properly, can make a tangible difference in how trades work out.

Investors who make decisions based solely on news often don’t fare as well as those who combine both news and price chart analysis.

No matter what the news says, from an investment standpoint what really matters is how prices respond to the news. And there is no better way to appreciate where money is flowing than with a well put together price chart.

In January 2023, we have seen an encouraging rally in stocks. The same folks who forecast that the Fed would stop raising rates are doing it again. Yet, SPX remains below its 200-day moving average and OBV has failed to turn up.

If this bellwether index can rise above this key chart point convincingly, the odds of a new bull market having emerged are better than even. But a nice upturn in OBV would clinch the deal. Another failure at this level will likely signal the start of a new down leg in stocks.