If you’re in the mood for unintentional comedy, click here to read the FBI’s files on “The Dead.” Hoover hounded the band and the rest of the counterculture, as part of President Nixon’s “War on Drugs.”

The drug war was an insidious way for Nixon and Hoover to persecute their enemies (i.e., anti-war protestors, the militant Left, civil rights activists, feminists, liberal intellectuals, etc.). The Nixon regime couldn’t ban their political activities, but it could ban their recreational proclivities. If you were caught by law enforcement with marijuana or psychedelic drugs, you faced a long stretch in the slammer, and maybe even a perp walk on the evening news.

And today? It’s not just marijuana that’s getting legalized; restrictions against psychedelics are getting lifted, too. In fact, the psychedelic world is joining hands with capitalism. The year 2023 is shaping up to be an inflection point for the commercialization of these mind-bending substances.

Psychedelics: the next investment frontier…

The marijuana industry still represents a huge growth opportunity, but the mainstreaming of psychedelics remains in its nascent stage, which makes LSD, psilocybin, ayahuasca, ketamine, MDMA, and other drugs the “next big thing” in growth-oriented investing.

After historic victories in Oregon and Colorado, the campaign to expand public access to psychedelic drugs is now moving to additional states in 2023.

A new statistical model published last December in the Journal of American Medicine (JAMA) predicts that most states will allow access to psychedelics over the next 10-15 years. The JAMA study asserts:

Want to cash in? Let’s examine what investors need to know.

Oregon. In 2020, Oregon became the first state to legalize psilocybin for personal use for those over age 21. More than 1.2 million residents, or 55.7% of voters, voted in favor of legalizing it. Psilocybin is the active ingredient in “magic mushrooms.”

During the November 2022 midterms, 25 of Oregon’s 36 counties, along with several individual cities, voted to ban psilocybin use. These bans came two years after the landmark 2020 vote to allow psilocybin use in the state.

But it’s complicated. The practice of “opting out” has been a common tactic during the drive to legalize marijuana throughout the nation. When adult-use cannabis laws are passed at the state level, sometimes certain localities subsequently ban weed in their respective jurisdictions.

The upshot is, psilocybin clinics are still moving forward in Oregon and are poised to open in several counties in 2023.

It’s no longer a crime under Colorado law to grow, possess, or share these substances. However, selling them remains illegal.

The measure, which Colorado voters passed by nearly 8 points in November, also authorizes access to psilocybin treatment in licensed “healing centers” across the state.

State lawmakers in both New York and California recently introduced legislation to decriminalize personal use of psilocybin and other natural medicines. New Jersey, Maine, and Washington are expected to soon follow suit.

The psychedelics industry could capture a significant chunk of the $28.6 billion global antidepressant market in coming years, as clinical trials of these substances proliferate (see chart). 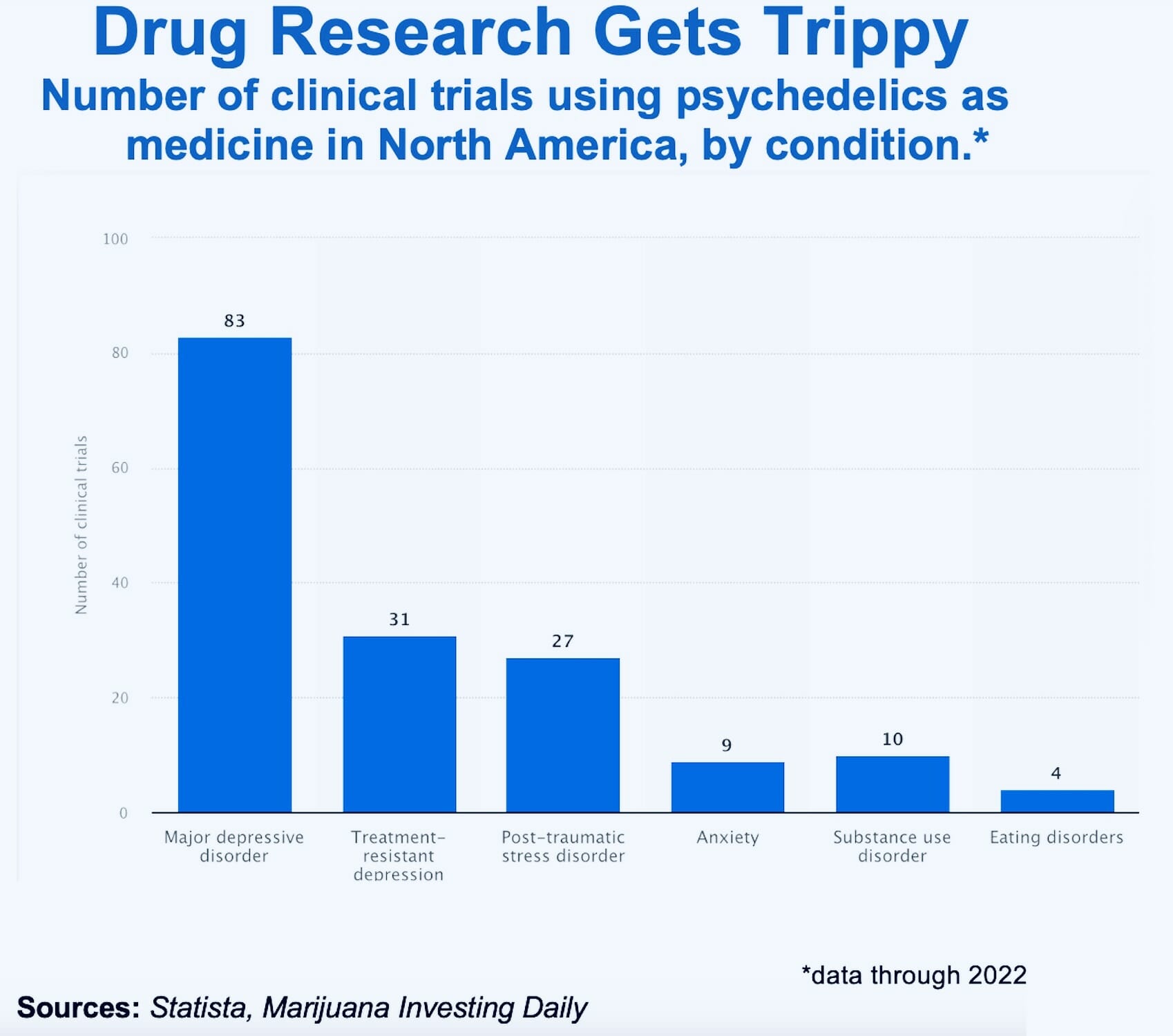 In the U.S., psychedelic drugs remain illegal at the federal level and in most states. But there’s been a surge of clinical trials in recent years testing illicit psychedelic drugs to treat mental-health disorders, generally with the close supervision of a psychotherapist.

It’s not just America. We’re witnessing a global phenomenon, especially in Europe (e.g., The Netherlands, Spain and Portugal), and North America. Last December, for example, the province of Quebec in Canada approved the use of psilocybin as a legitimate therapy under the state’s public health system.

Entrepreneurs and investors are taking notice. An increasing number of psychedelic biotech outfits are going public. Venture capital firms and even exchange-traded funds are emerging to cater to the trend. Psychedelics have taken a long, strange trip…from the FBI files to Wall Street investors.

Editor’s Note: As I’ve just explained, U.S. states aren’t waiting for the feds to take action on psychedelics. I’m keeping an eye out for the latest ways for investors to profit from the trend.

That’s why I’ve launched a new publication detailing how you can financially benefit from the consumer mainstreaming of cannabis and psychedelics.

An increasing number of jurisdictions in the U.S. and around the world will legalize cannabis and psychedelics this year, which in turn will create new markets, new sales, and big profits for the investors who act now.

Want to cash in on the psychotropic revolution? Consider my advice in Marijuana Profit Alert. Click here to learn more.