The problem with bull markets is that they are always obvious in retrospect. On the other hand, there are often some subtle signs backed by historical precedence which offer excellent foreshadowing of what may happen in the future.

So, are we in a new bull market? The truth is no one knows for sure, although there are some signs that suggest that we may be in the early stages of one. What I do know is that stocks are going up fairly nicely in the month of January, which is clearly a bullish sign.

The question may seem out of place, given that the Federal Reserve is raising interest rates, that Washington politics are in total disarray, that there is a seemingly endless war with uncertain repercussions in Ukraine, and that inflation, although flattening out, remains well above where it was before the COVID pandemic. But the question still needs to be asked.

Perhaps the answer is quite simple, given that bull markets usually arise when pessimism is so pervasive that there is no one left to sell. After all, it’s well known that bull markets climb the so-called wall of worry. However, much of what happens next will likely result from the actions of the Federal Reserve when it makes its next rate announcement on February 1.

A good place to start is by defining a bull market and its close cousin, the bullish trend. It’s actually fairly simple. A bull market is defined by a market period during which financial instruments, such as stocks, rise by 20% or more. A meaningful, long-term bullish trend occurs when prices trade above their 200-day moving average as they trend higher.

Read This Story: Your Silver Linings Playbook for 2023

Thus, the term bear market rally, or bull market within a bearish trend, was coined. Case in point: The summer rally in 2022 delivered a roughly 20% increase in the S&P 500 index before failing at the 200-day moving average, and falling to a new low, while remaining in a bear market.

Although, some analysts described the move as a bull market, in truth it really wasn’t. In other words, real bull markets occur when prices rise and remain above that key dividing line, the 200-day moving average.

All of which brings me to the present in the stock market, where once again, the S&P 500 has recently broken its 200-day moving average,

Way back in October 2022, I wrote an article titled “Why the Bear Market May be Over Sooner Rather Than Later,” in which I described the traditionally bullish performance of the stock market during the third year of any particular presidency, as summarized in what in market parlance is known as The Presidential Cycle.

Specifically, according to data compiled by Charles Schwab researcher Lee Bohl, the average performance for the S&P 500 (SPX) during the Presidential Cycle from 1933 to 2015 was as follows:

This Third Year Is Getting a Booming Start

A quick review of the major stock indexes in the month of January shows that so far, the third year script is adhering to norm as the S&P 500 (SPX) is up some 5% in the first half of the month. Much of this rally has been in response to reports which note the Fed and other central banks may slow the pace of their rate increases to 25 basis points from the recent 50 and 75 point hikes. 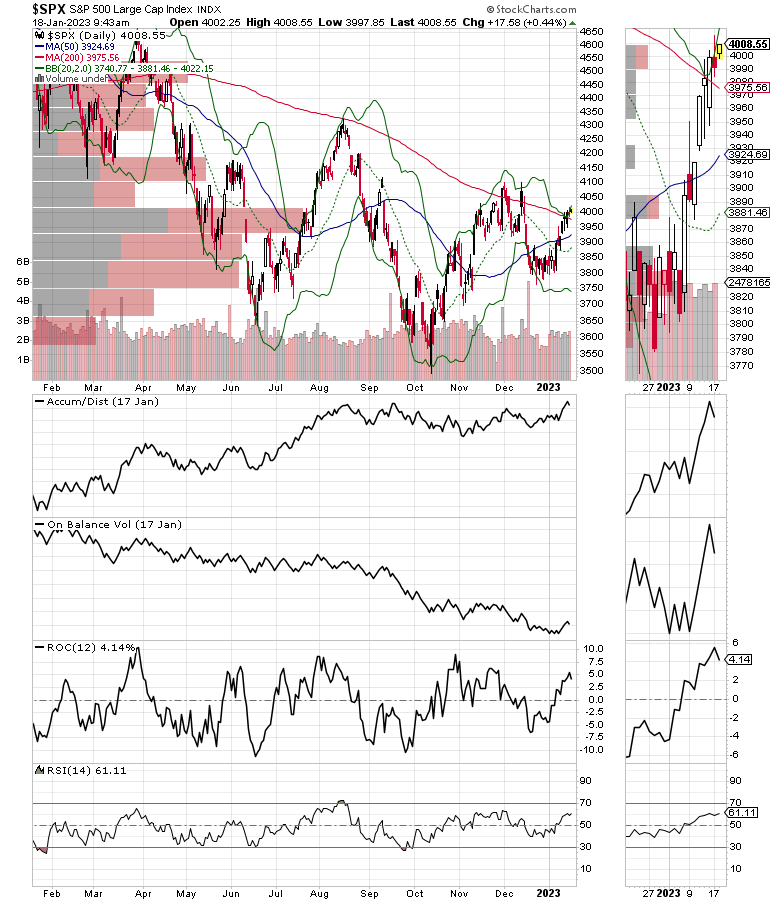 The stock market is hoping that a slowing of the consumer price index (CPI) inflation data over the last few months along with private survey data such as Purchasing Manager’s Index (PMI) reports which show the economy and inflation have weakened persistently as well will sway the Fed into slowing or pausing its interest hikes. 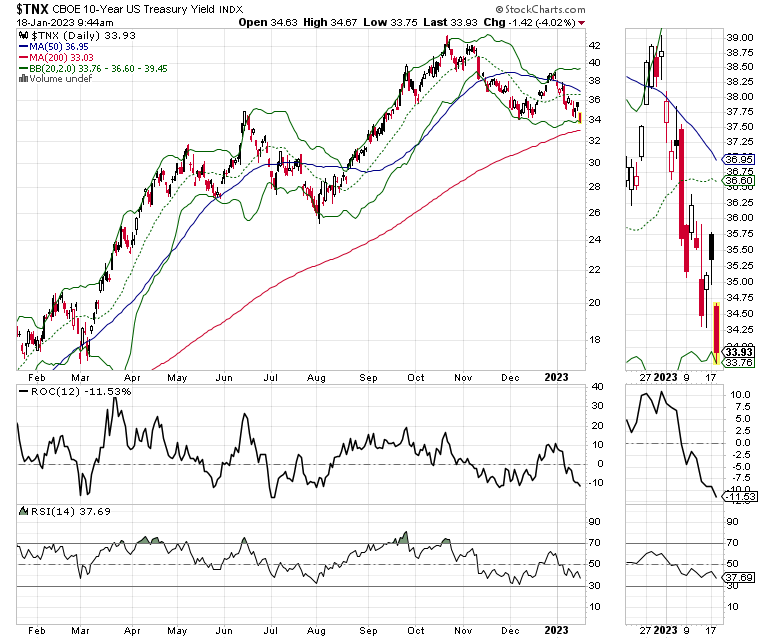 In response to these weakening economic statistics, the yield on the U.S. 10-Year note (TNX) has been falling over the last few weeks, which suggests that bond trades are betting on a recession. This would lead the Fed to cut interest rates to restart the economy.

Certainly, the action in the bond and stock markets, as illustrated by Treasury bond yields and the S&P 500’s recent price action, is painting a potentially bullish picture for stocks. But my favorite indicator, the New York Stock Exchange Advance Decline line (NYAD), is even more bullish.

I like NYAD because it’s an unfiltered gauge of the stock market’s trend; an indirect way to measure whether the odds of picking winners are favoring investors. That’s because NYAD is calculated by subtracting the number of declining stocks from the number of advancing stocks. By connecting the dots you get a simple yet complete picture of where the trend is headed.

Even better is the fact that unlike stock indexes, NYAD is not capitalization weighted, thus it can’t be distorted by extraordinary moves in largely weighted stocks in an index whose price is being influenced by news. 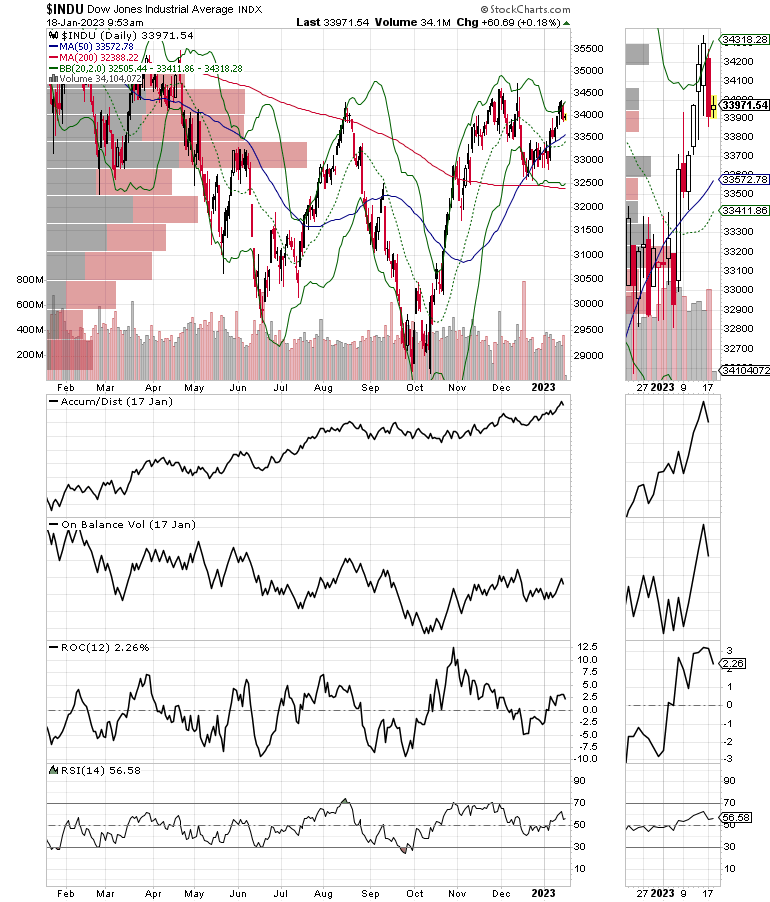 A perfect example of this type of price distortion in an index was evident on 1/17/23 when Goldman Sachs (NYSE: GS) missed its earnings. Because of its weighing in the Dow Jones Industrial Average (INDU), the index fell over 1%. Meanwhile, on the same day, the NYAD registered only a -90 reading, which was nowhere near as dramatic as what we saw in the Dow. 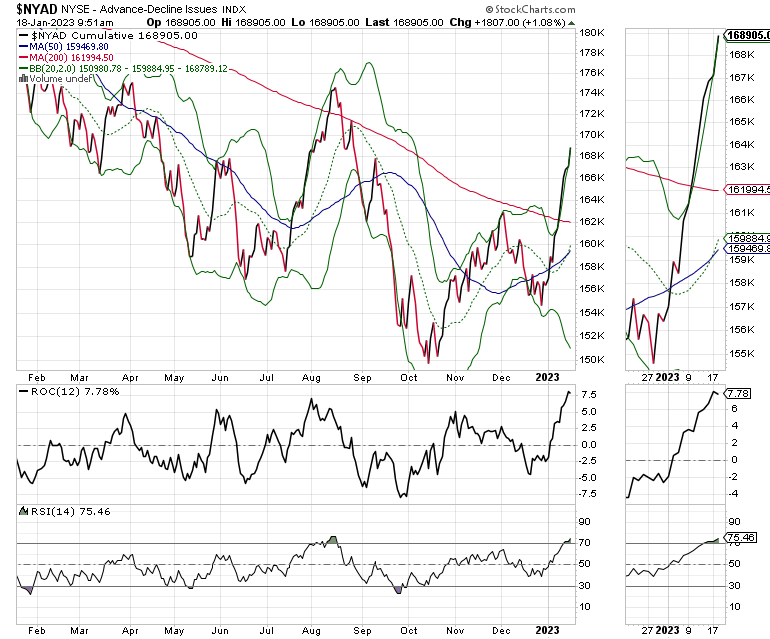 On that day, the Dow was a big loser while the average stock on the NYSE moved very little. Moreover, the NYAD remained near its recent highs for the year, while remaining above its 200-day moving average, which puts it squarely inside a bullish trend.

We are at a crucial point in the stock market. The bellwether index (SPX) is testing the resistance of its 200-day moving average, as bond yields are tumbling and the unfiltered NYAD is in the early stages of a bullish trend. All of this is occurring in the traditionally bullish period for the markets delineated by the third year in the Presidential Cycle.

To be in a bull market, SPX needs to rally 20% from its recent lows, which were registered in October 2022. On 1/17/23, SPX was roughly 14% above that low, which means another 6% gain is required from current levels. That would put SPX somewhere above 4200.

More important, when SPX finally breaks above its 200-day moving average convincingly, it will have moved into a bullish trend, a fact that is likely to bring in more money into the stock market and fuel the rally further as investors who fear that they will miss the rally will move money into stocks.

For its part, as long as NYAD remains above its 200-day moving average, an excellent case can be made that the majority of stocks are in a bullish trend, as happens in the early stages of a new bull market. As the number of stocks in a bullish trend expands, the higher the odds will be that the stock market is or will soon be in a bull market, because the NYAD will act like a magnet which pulls SPX higher.

A failure of NYAD at the 200-day moving average will likely lead to a resumption of the bearish trend.

PS: Every portfolio should have exposure to the marijuana industry. That’s why my colleague John Persinos, editorial director of Investing Daily, has launched a new service detailing how you can financially benefit from the consumer mainstreaming of cannabis and psychedelics.

An increasing number of U.S. states (and countries around the world) will legalize cannabis and psychedelics this year, which in turn will create new markets, new sales, and big profits for the investors who act now.